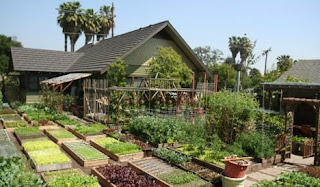 This is more a human interest story than any wave of the future. What it underlines is that the members of a community who are semi retired are more than happy to engage in garden agriculture. Youths are more inclined to assist for financial rewards, however modest.

It was on that basis that I have posted on the idea that our culture needs to integrate the convenience of urban life with the social utility the agricultural world. This allows our populations to be distributed over the agricultural lands at no cost to the land itself as the ratio is low enough as to accommodate simple soil transfers, while ultimately perhaps shrinking or at least diverting urban growth in such a way as to support the urban tax base and improve lifestyles.

Active gardening is solid physical therapy for all individuals no longer in their prime. It needs to be both encouraged and supported as part of our overall lifeway. In China, they made the decision to retire everyone at the age of fifty. Many return to their home villages and invest in the development of that village as well as take care of their grandchildren. This is sound social practice and needs to be lauded.

We have not created a working protocol for our society as yet that is particularly satisfactory. Rather than attempt to have it evolve, a debate is needed that will help sort it out. My suggestion of combining a high rise condo village integrated with farm ownership is one such possible option. Variations on this are all attractive if they also support childcare, childhood economic development and the active role of the semi retired. They are attractive because the urban environment handles these aspects of our lifeway rather expensively.

So these stories represent a yearning to have this form of personal lifestyle and will be well received once initiated. We may have to simply find a farm and build and show to prove it all out.

Mini-farms sprout up in Mexican megalopolis

A low-budget scheme has transformed a rubbish dump in an impoverished part of Mexico City into an urban garden, raising hopes for a new shade of green revolution.

Iztapalapa, a bustling borough of two million people within the greater sprawl of Mexico City's 20 million people, is an unlikely place to find an agricultural revolution.

But on a patch of land once strewn with the detritus associated with one of the world's largest cities, there now sits a 400 square meter (4,305 square feet) garden.

It is maintained by 40-year-old Irma Diaz as part of the district council's "agricultural development" program.

"We started in 2007 with 20 projects, we now have 82," said Edgar Duran, coordinator of the scheme, which has invested just 131,000 pesos, or around 10,000 dollars, and relies largely on volunteers to farm mini-plots where they are available.

In Iztapalapa fruit and vegetables are grown in mini-gardens, on roofs and even on the walls of buildings.

The natural produce is in demand from the many chic restaurants that dot the capital.

"We grow tomatoes and dozens of vegetables: lettuce, beets, carrots, radishes, and all without fertilizers or pesticides," said Diaz, a nurse who entered the scheme with some friends.

"Everything is natural, 'bio', as they say. It is for our use, but we sell a little," she said.

Susana Duran, a project coordinator for Iztapalapa, explained the transformation of a shady area of the capital.

Juanita Galeana, 60, comes to work in the garden twice a week with her husband. They sell a portion of production with Diaz on Wednesdays and Fridays.

"I lived in the country until I was 16. Like any kid, I planted seeds and I loved to harvest with my father."

Now, she said, she sometimes sells the produce for a nominal sum of around 80 pesos (six dollars).

Eugenio Varga is at the plot every morning. He is responsible for watering, which he takes care to conserve because supply is frequently cut.

"It distracted me," the 75-year-old said. "I am a widower, I live with my nephews. I take a few vegetables at home, they are tasty, fresh," he said.

Today, with Irma and Juanita, he is preparing a succulent salad of beets and tomatoes.

When the two women want to sell something they go to regular clients, who appreciate the freshness of the products and a slightly lower price than in the market.

"More than money, it's satisfying to take home good quality food, or when our customers tell us they had only seen carrots with their green stalks, as we sell them, in drawings," Irma Diaz said smiling.

She has one regret though, young people show little interest in the project, including her own son. It may not be a agricultural revolution just yet.

Email ThisBlogThis!Share to TwitterShare to FacebookShare to Pinterest
Labels: mexico