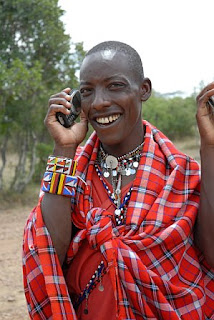 These two articles tell us a great story. We are watching the first serious stirrings of modernity in in which a middle class is becoming empowered to create wealth.

The mobile phone is completely altering and yes modernizing Kenyan society. There are presently over 17 million subscribers and the fact that it is presently facilitating money transfers almost says it all. There are the two things that make everything work. One is communication and the second is convenience of transferring cash. After that you are in business anywhere.

What has happened is that overnight the lead cell phone company is now the largest bank in Kenya.

Rural communities used to have to pay a lot of money upfront in order to get a modern well capable of providing clean drinking water. Now, there are companies that install these wells for free, complete with an integrated cell phone payment system. Want some water? Just pay as you go with your M-PESA account.

The speed of change in Kenya has been accelerated by the advent of the cell phone and foreshadows expectations all over Africa.

The latest tool is sending and receiving cash, a concept that has caused grumbling in Kenya's banking industry. The two cell phone operators - Safaricom and Zain have introduced money transfer services as a value addition to their business. The bankers have good reason to complain. For example, in July, the Safaricom MPesa service transferred KSh21bn with subscribers within the network transferring KSh6,8m amongst themselves.

Despite grumbling from the bankers to have the Central Bank of Kenya (CBK) explain what laws the mobile phone companies are operating under, the CBK has instead told the bankers to partner with telecommunication companies to provide better financial services to Kenyans. Equity Bank recently launched its Eazzy 24/7 service that allows its customers to do mobile banking like check banking statements, make forex rates enquiries and pay their utility bills.

Sokotele (Zain) and MPesa are money transfer services from the mobile operators. Both services are brands marketed by the two mobile operators. A mobile phone user can send cash as low as KSh500 to a maximum of KSh35,000. The MPesa service has been a huge success. By 31 July 2008, 3,6 million mobile users had registered.

For someone to send and receive cash via MPesa all they have to do is register and get a SIM card with the MPesa facility. To send cash to a person in another town, you go to an MPesa agent who sends the cash (via phone) for a minimal fee. There is an extra fee if the recipient is not registered. The recipient then goes to an agent and withdraws the cash also at a minimal fee. An MPesa user can use his/her phone as a “bank” by storing cash. All they need to do is go to an MPesa agent who loads the cash on their phone. The user can either send the entire amount or a bit or buy airtime. There is also has a facility that informs the user on the amount of cash they have in their MPesa account.

Zian's Sokotele works with a pay phone unit that can be used for making calls, printing airtime vouchers and money transfer. You do not need a SIM card or a phone. If someone wants to send cash, they need an identification number and name of the recipient. The Sokotele vendor then keys in the details and receives a unique reference number which the sender gives to the recipient. The recipient then collects his/her cash from a Sokotele agent on the other end by presenting their identification number and the unique reference number.

This new technology is something that the banking industry had not foreseen - based on their reaction. Some banks have quickly adopted and embraced the technology introduced mobile banking services that allow clients to check their bank balances but the cash transfer service is something that has caught the bankers unawares. Banks operate under the Central Bank of Kenya laws and currently there is no law that allows telecommunication companies to offer money services. According to a media report, the CBK says licensing (the mobile phone) money transfer services under the Banking Act may stifle services due to the rigorous requirements. The CBK is looking at regulating them under the National Payments Systems Bill to protect public interest which will go to parliament for debate.

Safaricom MPesa is not stopping. Two weeks ago, it partnered with PesaPoint to offer a service where MPesa customers can withdraw cash at PesaPoint ATM points. This is a win for Safaricom as it will see the number of MPesa users grow. MPesa registered users will be able to withdraw cash from any of the 110 PesaPoint ATMs in 46 towns in Kenya.

About 29 banks have joined the PesaPoint ATM network as a way of increasing cash accessibility to their clients. Through PesaPoint, customers can withdraw cash from the PesaPoint ATM, view bank balances, get a mini-statement, and transfer funds between accounts and even top up their mobile phones.

The mobile telephone services in Kenya started in 1992 with the Extended Total Access Communication System (ETACS) analogue system which was commercially launched in 1993. Then the elite of the society were the only ones who could afford them. A mobile handset retailed at KSh250,000. This resulted in a marginal mobile subscriber growth of less than 20,000 for a period of seven years (from 1993-1999). The enactment of the Kenya Communications Act in 1998 saw the introduction of competition in the industry. The Communications Commission of Kenya licensed the newly privatised Safaricom Limited and a new market entrant, KenCell Communications (now Zain) and over the years, the industry has grown and the operators have diversified their products to include data services and the highly successful money transfer service.

MIT researcher Nathan Eagle regaled the audience at the O’Reilly Emerging Technology conference yesterday with tales of technical innovation from . “ has some mobile phone services that are years ahead of what we have right now,” he said. Eagle was at ETech to present his new startup, Txteagle, which aims to be a kind of mobile Mechanical Turk, using countless mobile phone users in and beyond to solve easy tasks and earn small amounts of money in return. (There’s a good writeup in Wired News today)

It’s definitely an interesting idea. But to me, the real story is how mobile phones have transformed a country like in recent years, making not only services like Txteagle possible, but also shaking up the region’s entire economic system.

Eagle spent the last few years going back and forth between and the , and he witnessed this transformation firsthand. I caught up with him after his talk to learn more. According to Eagle, local incumbent Safaricom had started a minute-sharing service for its prepaid cell phone plans a few years back. The idea was to enable users to send minutes to family members in rural areas, who weren’t otherwise able to buy prepaid phone cards. However, Kenyans quickly came up with other uses. “Lots and lots of people were using it as a surrogate for currency,” Eagle said. “[You] could literally pay for taxi cab rides using cell phone credit.”

Safaricom realized a huge opportunity and started a mobile payment service called M-PESA. To call M-PESA a success would be an understatement, according to Eagle. “Within about a year, (Safaricom) became the biggest bank in .” Today you can use your phone to pay for cab rides and electricity, to get money out of ATMs without owning an ATM card or even having a traditional bank account.

Eagle shared another striking example of the transformative power of mobile payments during his ETech talk. Rural communities used to have to pay a lot of money upfront in order to get a modern well capable of providing clean drinking water. Now, there are companies that install these wells for free, complete with an integrated cell phone payment system. Want some water? Just pay as you go with your M-PESA account.

“It has transformed the country,” says Eagle

very interesting and heart warming post, thanks author, i would also encourage people to recycle their old mobile phones, and those who aren't available to give their phones for free can avail
cash 4 phones, Why keep your old, out of date cell lying around? Why not take advantage of the opportunity to get a few bucks? Some places are taking any model, in any condition, even if it's broken. This is usually because they can reuse some of the parts. It's obviously better for the environment than all of those phones ending up in the landfill. In all honesty, it probably won't be more than a few months and you'll want another model anyway!

I agree with your Comments.!