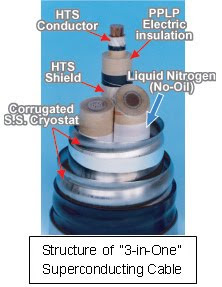 This is a financial news writer’s take on the future of capital demand in the power transmission business. Slowed investment in obsolete infrastructure has made the situation more pressing, but the reshaping of demand described here is just as important.

Just as important, a massive jump in demand is also about to develop. Thus the whole industry is in the midst of engineering a colossal expansion of capacity and obviously securing finance and the often necessary government guarantees. (these are often necessary to secure long term financing and normally costs us zip.)

To put this in perspective, essentially several millions of barrels of oil per day is about to be totally displaced by grid power. Grid power must now become efficient. We no longer want to waste half of it getting it to market. Therefore it is very good business to top up your car at a power station that is linked by superconductor cable to the main power trunk. It is very good business for the homeowner to produce power from his solar shingles and to store the surplus so that he only taps the grid sporadically. Even better, he is close enough to the power station to upload surplus power using conventional cables.

In fact it may become economically possible for local surplus power to be stored in homeowner’s power packs. This may not be as pretty as a central storage, but why waste necessary capacity?

This is happening because of the massive increase in demand about to wash over our electrical energy market. The only comparable that I can make is the advent of fiber optic telecommunication cable. I am hearing the same silly stories about how it isn’t quite going to happen that way. In stead we are in for the next great market bubble as this demand emerges. At least it will be an old fashioned market bubble and not a insane subprime bubble. Your friendly neighborhood power company is about to become a dot com darling. What could be safer than a utility? Oh well!

You need to know about the grid.

It's the endless network of power plants, wires, towers, meters, and software that you've come to rely on, every time you flick a light switch.

And it's closer to failing than you think. . .

Consider this nugget from the American Society of Civil Engineer's (ASCE) most recent infrastructure report card:

Listen, 70 years ago. . . before microwaves, iPods, cell phones, laptops, plasmas, and LCDs. . . only 10% of our energy use went toward producing electricity.

And today — as I write this on my two-screened computer, with a cell phone in my pocket and a GPS in my bag — the production of electricity requires 40% of 's total energy use.

But capacity is not the problem. . .

As you read in the quote above, distribution is our real problem. We've invested billions in generation, but have lacked with respect to transmission and distribution.

How bad is the discrepancy? Back to the ASCE:

If we continue on our current path. . . there will come a day when you flick the switch and the light does not turn on. But it won't be a case of a burned-out bulb — it'll be a system-wide failure.

As you know, the past 40 years have been all about energy production. We've built nukes; we've built coal plants. We've built giant dams.

More recently, we've deployed thousands of megawatts of solar, wind, and geothermal in an effort to go green.

And all that stuff is great.

But it seems now that we may have been putting the energy horse in front of the distribution cart.

In the , there are dozens of wind farms turning out several gigawatts of electricity. But in . . . there are no wind farms.

Which location uses more energy and has a much denser population?

Not only do we have inadequate transmission capabilities for a growing nation. . . what we do have is nearing the end of its useful life.

Again, to the ASCE:

Because the existing transmission system was not designed to meet present demand, daily transmission constraints or "bottlenecks" increase electricity costs to consumers and increase the risk of blackouts. The need to expand the distribution infrastructure and install new distribution equipment to meet population and demand growth will require continued investment.

The man who designed our current grid is the same man who perfected the first light bulb. He couldn't have imagined — let alone designed a grid for — everything we'd need electricity for today.

How can we press into 2010, and all the gadgets that come with it, when we're relying on an electric grid that was planned when outhouses were still in use?

It's going to take a massive overhaul of our grid to what is now known as the smart grid.

And Uncle Sam, along with dozens of specialized companies, is making it happen. The stimulus alone poured more than $6 billion into smart grid funding.

But it'll take much more than that. In fact, the ASCE concludes: