The Fall of the Maya 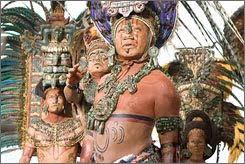 It was always fairly clear that abrupt collapse was likely self induced. What this work has made clear is the mechanism. The collapse was induced by a terminal process of deforestation that suppressed the natural hydraulic cycle to the extent that drought became dominant.

The same process stripped the Sahara and the Middle East and likely a number of other locales not now obvious.

Every tree returns fifty to one hundred liters per day to the atmosphere. That is why a rainforest can prosper. Even though it rains, the water is put back into the atmosphere by the trees very quickly.

So if you knock all the trees down, the soils dehydrate and even blow away. This happened massively in Mesopotamia and left us with the present husk. Restoration begins with extensive reforestation and barrier wood lots. This improves rainfall and moisture retention.

Even in areas with sufficient moisture today, hydraulic planning will cause huge improvements. Such areas often have woodlots, but ill situated. Regionally planned forests and woodlot strips can also provide a wide range of ecological bonuses besides supporting the hydraulic cycle.

It is assumed that agriculture was based on slash and burn. I find that questionable. The reason for that is that method would leave two thirds of the land under forest and certainly unable to support the population densities.

Yet a thousand or so miles away along the coast we come to South America and the terra preta corn culture that allowed the land to be fully exploited. It is a creditable hypothesis that the terra preta corn culture originated in Maya land. We have to look for the tell tales to see if this did occur and we should be looking for terra mulato. This is the large field form of the process and the most likely to discover.

I would also like to see a study on the subject of slash and burn among Stone Age cultures. My reason for that is that it seems so unnecessary and requires way too much effort. The tribe would need garden small patches in this climate and the effort to produce fields would be for the production of maize for storage. Again this is part of a state driven system since corn represents a form of wealth storage.

In the end, they did deforest the countryside as their population became huge. They needed a lot of wood to supply fuel and to produce calcined lime. This eventually denuded huge tracts as is presently happening around the world in similar circumstances. We can assume that crews got into the charcoal production business to support the building trades allowing the fuel to be transported.

A collapse of local hydraulics would have caused an expansion of land under cultivation to offset this situation, making it progressively worse, until a sequence of dry years pushed it all over .

The Fall of the Maya: "They Did it to Themselves"

October 6, 2009: For 1200 years, the Maya dominated Central America. At their peak around 900 A.D., Maya cities teemed with more than 2,000 people per square mile -- comparable to modern Los Angeles County. Even in rural areas the Maya numbered 200 to 400 people per square mile. But suddenly, all was quiet. And the profound silence testified to one of the greatest demographic disasters in human prehistory -- the demise of the once vibrant Maya society.

What happened? Some NASA-funded researchers think they have a pretty good idea.

"They did it to themselves," says veteran archeologist Tom Sever.

"The Maya are often depicted as people who lived in complete harmony with their environment,' says PhD student Robert Griffin. "But like many other cultures before and after them, they ended up deforesting and destroying their landscape in efforts to eke out a living in hard times."

A major drought occurred about the time the Maya began to disappear. And at the time of their collapse, the Maya had cut down most of the trees across large swaths of the land to clear fields for growing corn to feed their burgeoning population. They also cut trees for firewood and for making building materials.

"They had to burn 20 trees to heat the limestone for making just 1 square meter of the lime plaster they used to build their tremendous temples, reservoirs, and monuments," explains Sever.

He and his team used computer simulations to reconstruct how the deforestation could have played a role in worsening the drought. They isolated the effects of deforestation using a pair of proven computer climate models: the PSU/NCAR mesoscale atmospheric circulation model, known as MM5, and the Community Climate System Model, or CCSM.

"We modeled the worst and best case scenarios: 100 percent deforestation in the Maya area and no deforestation," says Sever. "The results were eye opening. Loss of all the trees caused a 3-5 degree rise in temperature and a 20-30 percent decrease in rainfall."

The results are telling, but more research is needed to completely explain the mechanisms of Mayan decline. Archeological records reveal that while some Maya city-states did fall during drought periods, some survived and even thrived.

"We believe that drought was realized differently in different areas," explains Griffin. "We propose that increases in temperature and decreases in rainfall brought on by localized deforestation caused serious enough problems to push some but not all city-states over the edge."

The Maya deforested through the use of slash-and-burn agriculture – a method still used in their old stomping grounds today, so the researchers understand how it works.

"We know that for every 1 to 3 years you farm a piece of land, you need to let it lay fallow for 15 years to recover. In that time, trees and vegetation can grow back there while you slash and burn another area to plant in."

But what if you don't let the land lay fallow long enough to replenish itself? And what if you clear more and more fields to meet growing demands for food?

"We believe that's what happened," says Griffin. "The Maya stripped large areas of their landscape bare by over-farming."

Not only did drought make it difficult to grow enough food, it also would have been harder for the Maya to store enough water to survive the dry season.

"The cities tried to keep an 18-month supply of water in their reservoirs," says Sever. "For example, in Tikal there was a system of reservoirs that held millions of gallons of water. Without sufficient rain, the reservoirs ran dry." Thirst and famine don't do much for keeping a populace happy. The rest, as the saying goes, is history.

"In some of the Maya city-states, mass graves have been found containing groups of skeletons with jade inlays in their teeth – something they reserved for Maya elites – perhaps in this case murdered aristocracy," he speculates.

No single factor brings a civilization to its knees, but the deforestation that helped bring on drought could easily have exacerbated other problems such as civil unrest, war, starvation and disease.

Many of these insights are a result of space-based imaging, notes Sever. "By interpreting infrared satellite data, we've located hundreds of old and abandoned cities not previously known to exist. The Maya used lime plaster as foundations to build their great cities filled with ornate temples, observatories, and pyramids. Over hundreds of years, the lime seeped into the soil. As a result, the vegetation around the ruins looks distinctive in infrared to this day."

"Space technology is revolutionizing archeology," he concludes. "We're using it to learn about the plight of ancients in order to avoid a similar fate today."