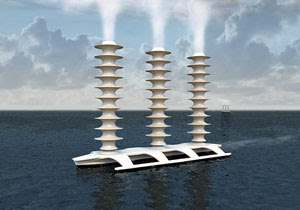 This is not technology we are likely to see anytime soon. The need to produce small droplet size is a killer if it can be done at all. Yet if it can be done with sea water, then we have other valuable applications that may not need the same size reduction.

It would be awfully handy to have such devices set up along shorelines adjacent to dry lands such as the for one. Operating during periods in which the wind is onshore, one could introduce a large mass of water into the atmosphere, surely enough to support a large woodland.

Respiration and precipitation would carry the water steadily inland to the extent of the range of the inland winds.

I am less convinced of the albedo strategy as a stand alone proposition, but combined with strategic positioning of manufactured cloud or even humid air we are more assured of a visible payback.

Whatever process is used, injecting small droplets will certainly humidify the atmosphere whatever size is used.

"Albedo Yachts" and Marine Clouds: A Cure for Climate Change?

SHIP TRACKS: Could ships spraying sea mist to boost cloud reflectivity cure climate change? Already, ship tracks can be picked out in marine clouds, as pictured here, thanks to the interaction of ships' exhaust and water vapor in the atmosphere.
Courtesy NASA/GSFC/LaRC/JPL, MISR Team.

Here's an idea to cool Earth: make marine clouds into better reflectors of sunlight. After all, clouds already reflect more of the sun's radiation back into space than the amount trapped by human emissions of carbon dioxide. So why not make them even more effective?

Enter "marine cloud brightening," a geoengineering scheme that would increase cloud reflectivity over the ocean by spraying them with an ultrafine saltwater mist from ships. The clouds, containing more particles, would cast enough sunlight back into space to at least partially offset the warming effects of all that CO2 from burning fossil fuels.

Climate scientists have mixed reactions to the idea, which was first proposed in 1999 by climatologist Jonathan Latham of the National Center for Atmospheric Research in Boulder, Colo. For instance, Andy Jones and colleagues at the Hadley Center for Climate Prediction and Research, Met Office in the U.K. think that if marine cloud brightening were deployed in the Atlantic Ocean, it might help turn the Amazon rainforest into a desert by cooling the South Atlantic, which would lead to less evaporation from the ocean, thus reducing rainfall over the forest. A new study however, has found that marine cloud brightening would enhance rainfall over land, counters Latham, who did not want to identify the authors because the paper has yet to be published.

Nevertheless, a growing number of engineers have already begun to think about how marine cloud brightening could actually be accomplished. A handful of obstacles to the realization of Latham's vision have been identified, chief among them the problem of creating hundreds of gallons per minute of sea spray, but the engineers involved are optimistic.

How "albedo yachts" could work

Stephen Salter, an emeritus professor of engineering design at the University of Edinburgh is the lead and was for many years the only engineer working on a proposal to accomplish marine cloud brightening by populating the world's oceans with up to 1,500 ships of a somewhat exotic design—sometimes known as "albedo yachts". Each vessel would be remote-controlled, wind-powered, and capable of generating (via turbines dragged through the water) the electricity required to create a mist of seawater and loft it 1,000 meters into the atmosphere.

Instead of using sails, Salter's ships would transform wind energy into thrust via the use of Flettner rotors. First used on a ship in 1926, Flettner rotors consist of spinning tubes resembling oversize masts on a conventional sailing vessel. The tubes interact with wind in much the same way the wing of an airplane does, generating "lift" perpendicular to the axis of their rotation. Flettner rotors are a proved, if rarely used, technology because they were not invented until the twilight of wind-powered shipping, when propellers and fossil fuels became the propulsion mechanism of choice. Salter chose them, however, because they can be powered by a renewable resource, they're easy to control with an onboard computer, they're better in hurricane winds than conventional sails—very necessary for an unmanned craft wandering the seas for years—and they provide a natural place to house the vessel's seawater spraying system.

"Although they look so science fictiony, those Flettner vessels, they also, I think, have a high chance of being suitable vehicles for this job," Latham says. Salter estimates that if the world completely fails to curtail CO2 emissions, his scheme would require a fleet of up to 1,500 vessels, which would have to be deployed at the rate of about 50 a year in order to keep up with increasing atmospheric carbon dioxide. The construction alone of all 1,500 vessels would cost between $3.2 billion and $4.8 billion, with unknown and uncalculated maintenance costs or even the crafts' lifetimes.

The challenge of micron-size droplets

Ultimately, to counteract the effects of a doubling of the amount of carbon dioxide in the atmosphere from preindustrial levels, Salter estimates that each of the 1,500 ships must do something no one has ever attempted—transform 30 liters of seawater per second into a uniform spray of micron-size droplets.

According to Latham's calculations, the saltwater droplets sprayed into the atmosphere must be between 0.8 and two microns across. (For reference, two microns is about the size of an Escherichia coli bacterium.) Latham's work also suggests the droplets should all be the same size so that they don't clump together and form larger drops, which could cause clouds above the ship to drop rain and dissipate—the opposite of the intended effect.

"Trying to make these droplets is really the crucial part, and it remains to be seen if it's going to work," says Armand Neukermans, an engineer and serial entrepreneur who is attempting to lead the U.S.-based effort to create a suitable spray system. Neukermans, a veteran of Xerox and Hewlett–Packard, has gathered a team of a dozen engineers who, like him, have expertise in creating micron-size particles for printing and micro-fabrication. The group includes John Vaught, who was the primary inventor of thermal inkjet printing while at HP. Many of the group's members are semi-retired, and all are working on a mostly volunteer basis.

"We're the plumbers," Neukermans says. "It's an eclectic group."

Back to silicon chips

Edinburgh's Salter, for his part, has tested and discarded a number of ideas about how to create the spray, including collisions between two air-saturated jets of water, which make them more likely to explode into tiny droplets; vibrating piezoelectric vaporizers of the kind used for theatrical effects; and a unique machine of Salter's own devising that he describes as the hydraulic equivalent of a photomultiplier—it would consist of a series of electrically charged plates to create an ever-expanding cascade of droplets. Ultimately, astrophysicist Lowell Wood, an early advocate of geoengineering, suggested that Salter could simply force water through an array of tiny holes, like a watering can. Making that work will require drilling 1.5 billion holes 0.8 micron in diameter in a single 20-centimeter-diameter wafer of silicon. (Silicon was the obvious choice for this solution because chip-fabricators have decades of experience in creating very tiny devices with it.)

Tom Stephenson, a collaborator of Salter's who is operations director of the Scottish Microelectronics Center at the University of Edinburgh, has etched comparable shapes into silicon before, such as tiny holes for use in optical pressure sensors, and believes it would be feasible to create, with conventional chip-fabrication technology, the billions of holes required.

"What's not clear is how well silicon wafers will withstand the pressure, and it's not sure how good it will be in presence of defects such as a nick in [the] edge of a hole," Stephenson says. "Silicon, being a crystalline material, has a tendency to fracture along fault lines and crystal planes."

Neukermans and his team have conducted "very preliminary" experiments with seawater forced through micron-size holes, and the initial results have not been encouraging. Using seawater that has been "polished," or filtered many times, Neukermans has tested holes from 25 microns down to one micron.

Salter's spray system design anticipates the issue of clogging—he hopes to solve it by back-flushing his micron-size holes with more water—but what's required now is actual testing of his elaborate designs. That's going to require funding, which has been scarce because the entire field of geoengineering remains suspect to many climate scientists and, until very recently, to scientific funding bodies. The first batch of funding specifically earmarked for geoengineering was announced in September by the Research Council UK's Energy Programme, but it is unclear yet what the scope of this funding will be.

"You can go an awfully long way with brain power and access to the right library," Salter says, "but it's getting to the stage where I can't do very much more."

What about using conventional ships?

But where national science funding sources have failed, Silicon Valley entrepreneurs have stepped in, investing small amounts of money as a philanthropic enterprise—the total is undisclosed, but it includes the Salter's travel expenses—to explore the potential of geoengineering.

"The work we have done, which is not very extensive, is probably a large fraction of geoengineering funding in the world," says Nathan Myhrvold, former Chief Technology Office of Microsoft, founder of Microsoft Research and current head of Intellectual Ventures, a company whose primary product is patents on ideas generated in closed-door brainstorming sessions. When asked whether Latham's and Salter's geoengineering schemes are practical from an engineering perspective, Myhrvold responds that he believes it’s practical, but that "All of these [geoengineering] ideas need a lot more work. Stephen [Salter] and John [Latham] would be the first to say that. I think it needs to be followed up."

Myhrvold points out, however, that Salter's "very elegant" ships with rotating sails are not the only way to accomplish Latham's geoengineering plan. "Why not just put this [spray system] on conventional ships and use a diesel pump?"

Salter and Latham both agree that the next step for evaluation of this scheme by climatologists—large-scale field trials—could use ships of conventional design. And although none of the scientists involved advocates for the deployment of a geoengineering fix right now, they are eager to test and model its potential impacts so that if the world decides it is needed, its consequences are at least known.

"The climate problem is a very difficult problem for mankind," Myhrvold adds. "It's almost perfectly designed to evade our normal policy guidelines. We may need to bridge the gap between the time when we get to a renewable energy infrastructure and where we are today."