Wind Turbine Blades Can’t Be Recycled, So They’re Piling Up in Landfills 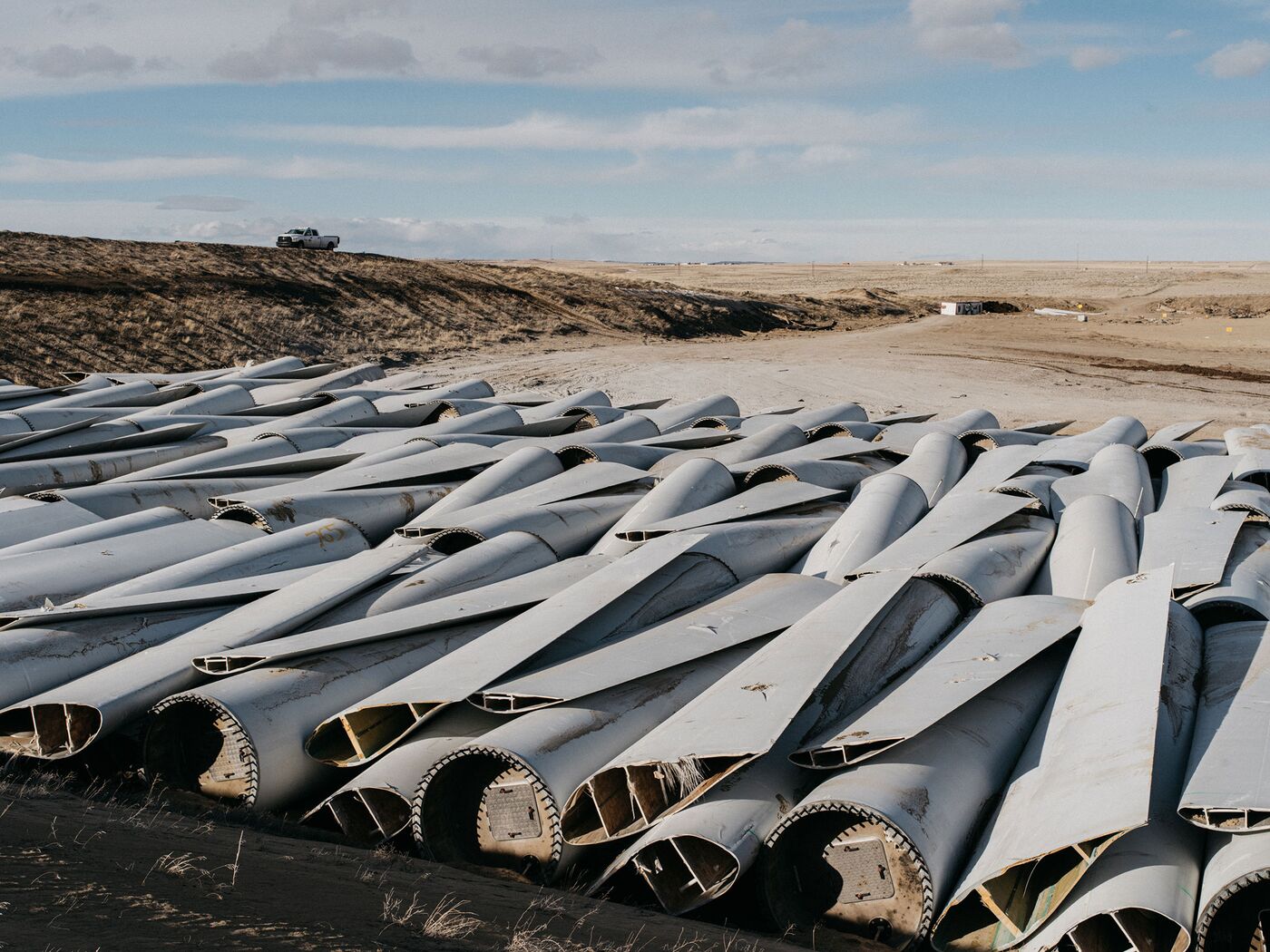 The irony here is just too rich to resist.   We cannot even sink them conveniently into the ocean.  Certainly the cost to break them up is also no small thing.  Worse, they are all made using mostly glass fiber, just like all our sinks and bathtubs.

Destruction demands high heat and the fuel content is scant.  Thus we will need to be really creative here.  Standing them on end in the center of a bowl allowing additional pieces to be added might sort of work.  At least we can produce a burn chimney hot enough to do some good.  But likely not good enough.

An actual burn would at least allow recovery of all the metal.

I am getting so tired of waste management politics.  There is only one real way forward for all waste.  It is to operate what I describe as a double lung incinerator.  The first lung or stage works at 600 C which serves to breakdown all carbon based compounds to produce ash and fuel for the second lung or stage.  Propane is then added to the second stage to jump the temperature to 2000 C in order to reduce all remaining carbon based molecules to CO2.

Such a system frees up all the inorganics in the first stage for easy compaction and recovery, while all organics become CO2.  A third stage can also be added if we have nasties like PCBs.

In this example we need a huge kiln to handle the pieces and a convenient add in waste fuel stream as well to avoid burning a lot of natural gas.  Then at least we can crush and compact the metal and fiber for smelter feed.

Wind Turbine Blades Can’t Be Recycled, So They’re Piling Up in Landfills

Companies are searching for ways to deal with the tens of thousands of blades that have reached the end of their lives.
By
Chris Martin
February 5, 2020, 2:00 AM PST

A wind turbine’s blades can be longer than a Boeing 747 wing, so at the end of their lifespan they can’t just be hauled away. First, you need to saw through the lissome fiberglass using a diamond-encrusted industrial saw to create three pieces small enough to be strapped to a tractor-trailer.

The municipal landfill in Casper, Wyoming, is the final resting place of 870 blades whose days making renewable energy have come to end. The severed fragments look like bleached whale bones nestled against one another.

“That’s the end of it for this winter,” said waste technician Michael Bratvold, watching a bulldozer bury them forever in sand. “We’ll get the rest when the weather breaks this spring.”

Tens of thousands of aging blades are coming down from steel towers around the world and most have nowhere to go but landfills. In the U.S. alone, about 8,000 will be removed in each of the next four years. Europe, which has been dealing with the problem longer, has about 3,800 coming down annually through at least 2022, according to BloombergNEF. It’s going to get worse: Most were built more than a decade ago, when installations were less than a fifth of what they are now.

Built to withstand hurricane-force winds, the blades can’t easily be crushed, recycled or repurposed. That’s created an urgent search for alternatives in places that lack wide-open prairies. In the U.S., they go to the handful of landfills that accept them, in Lake Mills, Iowa; Sioux Falls, South Dakota; and Casper, where they will be interred in stacks that reach 30 feet under.
Explore dynamic updates of the earth’s key data points

“The wind turbine blade will be there, ultimately, forever,” said Bob Cappadona, chief operating officer for the North American unit of Paris-based Veolia Environnement SA, which is searching for better ways to deal with the massive waste. “Most landfills are considered a dry tomb.”

“The last thing we want to do is create even more environmental challenges.”

Each blade is cut into pieces for transport and stacked for efficiency.
Photographer: Benjamin Rasmussen for Bloomberg Green

To prevent catastrophic climate change caused by burning fossil fuels, many governments and corporations have pledged to use only clean energy by 2050. Wind energy is one of the cheapest ways to reach that goal.

The electricity comes from turbines that spin generators. Modern models emerged after the 1973 Arab oil embargo, when shortages compelled western governments to find alternatives to fossil fuels. The first wind farm in the U.S. was installed in New Hampshire in 1980, and California deployed thousands of turbines east of San Francisco across the Altamont Pass.

The first models were expensive and inefficient, spinning fast and low. After 1992, when Congress passed a tax credit, manufacturers invested in taller and more powerful designs. Their steel tubes rose 260 feet and sported swooping fiberglass blades. A decade later, General Electric Co. made its 1.5 megawatt model—enough to supply 1,200 homes in a stiff breeze—an industry standard.

Wind power is carbon-free and about 85% of turbine components, including steel, copper wire, electronics and gearing can be recycled or reused. But the fiberglass blades remain difficult to dispose of. With some as long as a football field, big rigs can only carry one at a time, making transportation costs prohibitive for long-distance hauls. Scientists are trying to find better ways to separate resins from fibers or to give small chunks new life as pellets or boards. 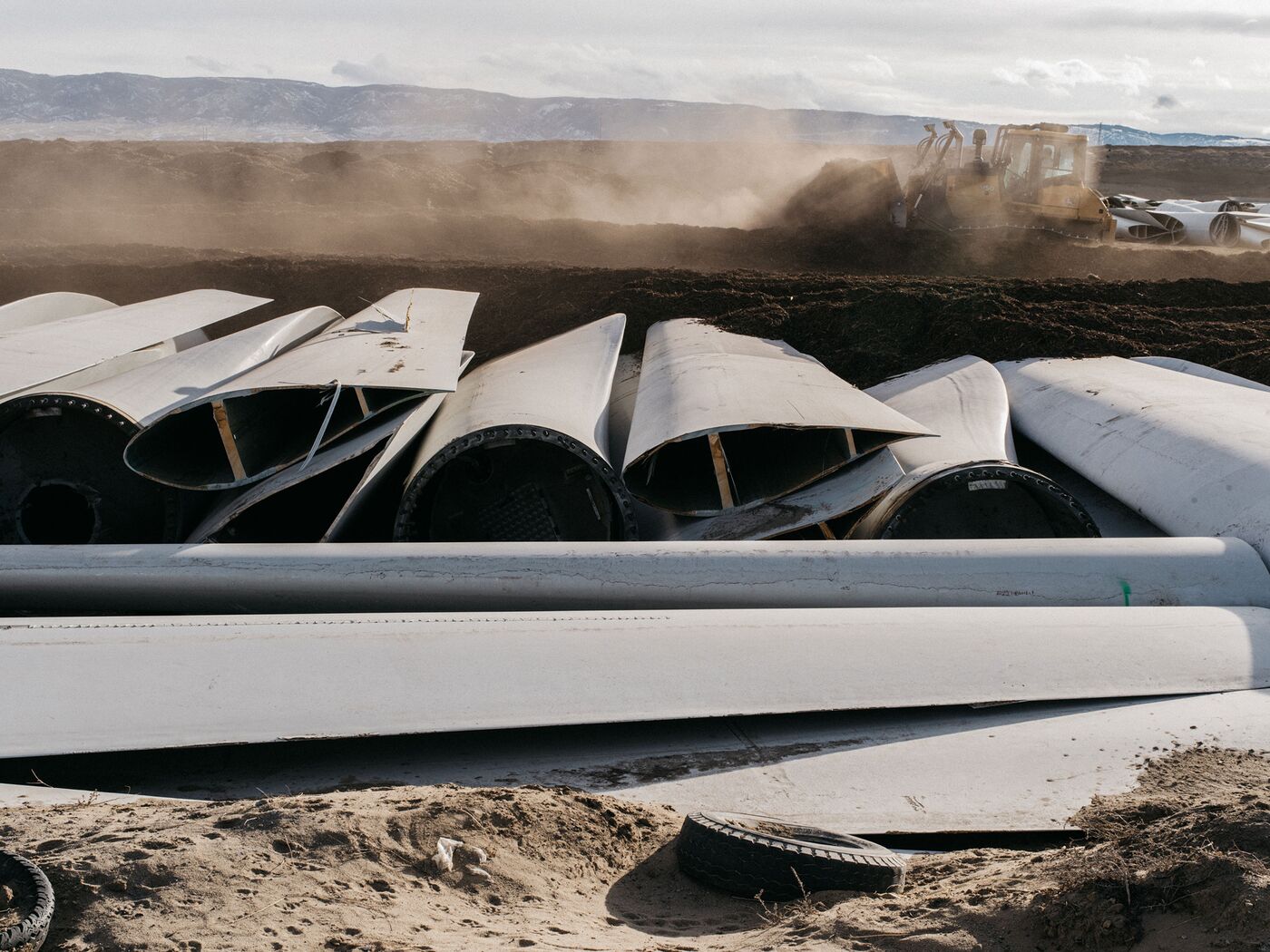 In the European Union, which strictly regulates material that can go into landfills, some blades are burned in kilns that create cement or in power plants. But their energy content is weak and uneven and the burning fiberglass emits pollutants.

In a pilot project last year, Veolia tried grinding them to dust, looking for chemicals to extract. “We came up with some crazy ideas,” Cappadona said. “We want to make it a sustainable business. There’s a lot of interest in this.”

One start-up, Global Fiberglass Solutions, developed a method to break down blades and press them into pellets and fiber boards to be used for flooring and walls. The company started producing samples at a plant in Sweetwater, Texas, near the continent’s largest concentration of wind farms. It plans another operation in Iowa.

“We can process 99.9% of a blade and handle about 6,000 to 7,000 blades a year per plant,” said Chief Executive Officer Don Lilly. The company has accumulated an inventory of about one year’s worth of blades ready to be chopped up and recycled as demand increases, he said. “When we start to sell to more builders, we can take in a lot more of them. We’re just gearing up.” 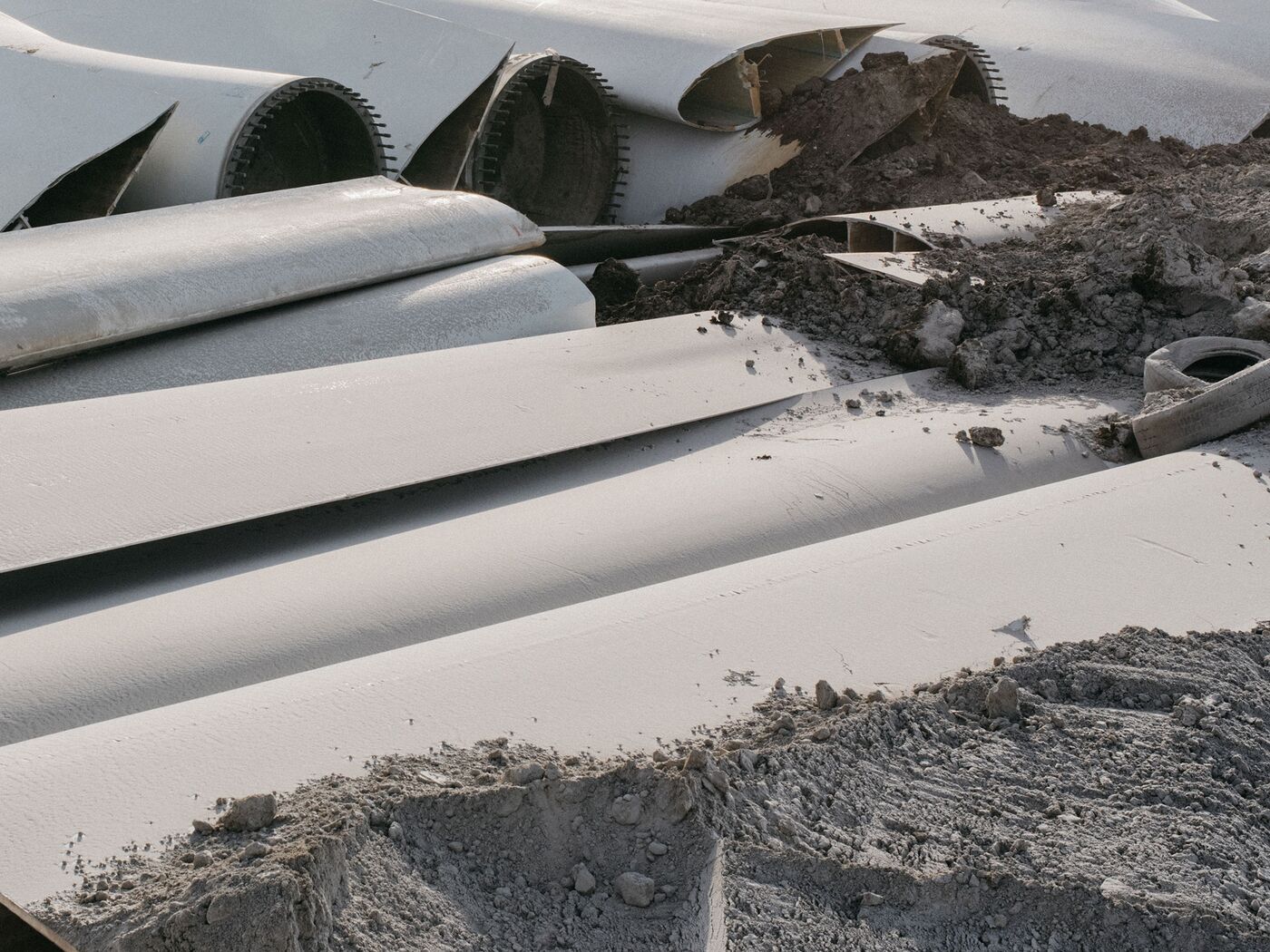 Workers are experimenting with methods to fit more blades in their graves.
Photographer: Benjamin Rasmussen for Bloomberg Green

Until then, municipal and commercial dumps will take most of the waste, which the American Wind Energy Association in Washington says is safest and cheapest.

“Wind turbine blades at the end of their operational life are landfill-safe, unlike the waste from some other energy sources, and represent a small fraction of overall U.S. municipal solid waste,” according to an emailed statement from the group. It pointed to an Electric Power Research Institute study that estimates all blade waste through 2050 would equal roughly .015% of all the municipal solid waste going to landfills in 2015 alone.

In Iowa, Waste Management Inc. “worked closely with renewable energy companies to come up with a solution for wind mill blade processing, recycling and disposal,” said Julie Ketchum, a spokeswoman. The largest U.S. trash hauler gets as many as 10 trucks per day at its Lake Mills landfill.

Back in Wyoming, in the shadow of a snow-capped mountain, lies Casper, where wind farms represent both the possibilities and pitfalls of the shift from fossil fuels. The boom-bust oil town was founded at the turn of the 19th century. On the south side, bars that double as liquor stores welcome cigarette smokers and day drinkers. Up a gentle northern slope, a shooting club boasts of cowboy-action pistol ranges. Down the road, the sprawling landfill bustles and a dozen wind turbines spin gently on the horizon. They tower over pumpjacks known as nodding donkeys that pull oil from wells.

“People around here don’t like change,” said Morgan Morsett, a bartender at Frosty’s Bar & Grill. “They see these wind turbines as something that’s hurting coal and oil.”

But the city gets $675,000 to house turbine blades indefinitely, which can help pay for playground improvements and other services. Landfill manager Cynthia Langston said the blades are much cleaner to store than discarded oil equipment and Casper is happy to take the thousand blades from three in-state wind farms owned by Berkshire Hathaway Inc.’s PacifiCorp. Warren Buffett’s utility has been replacing the original blades and turbines with larger, more powerful models after a decade of operation. 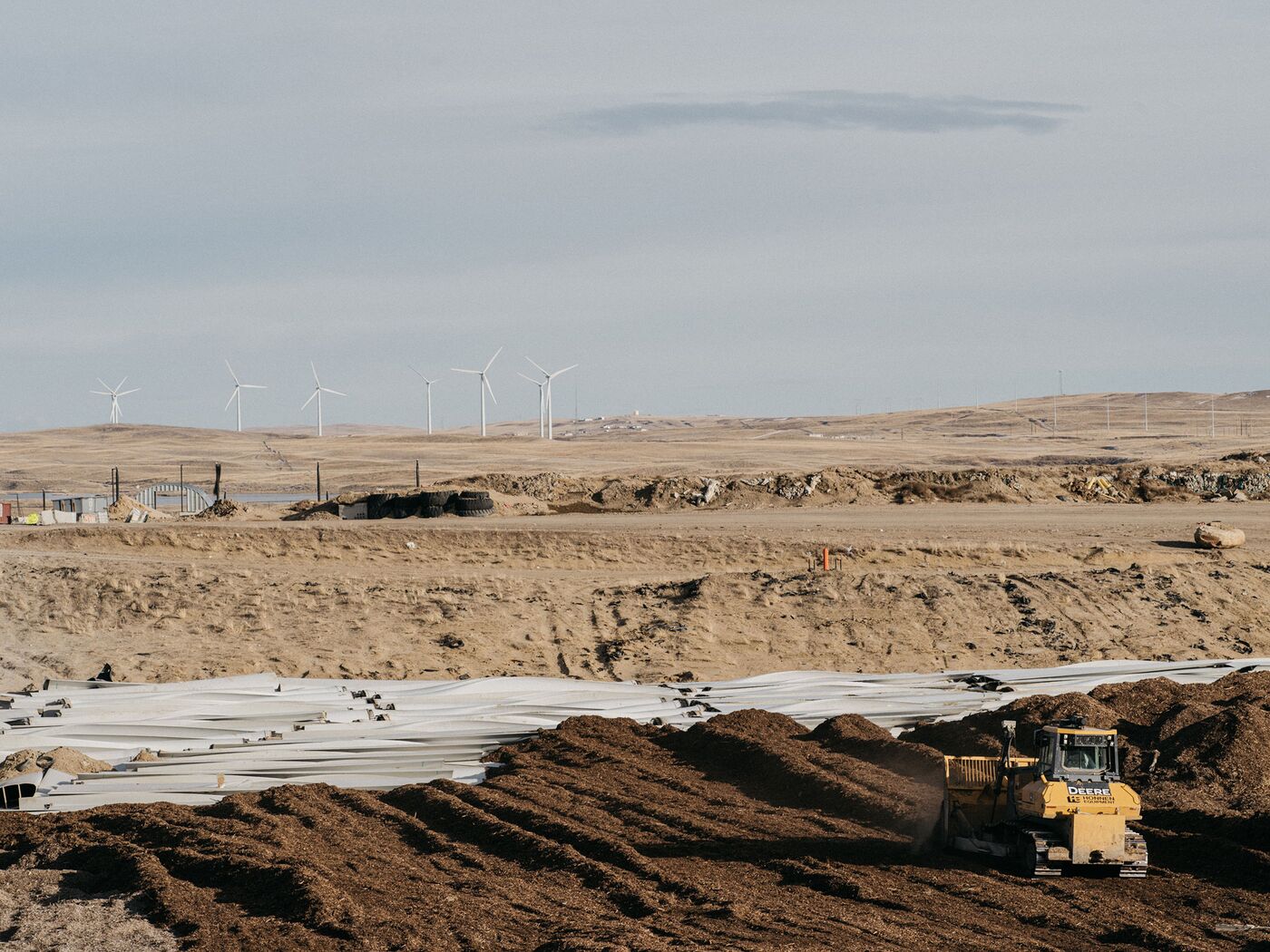 While acknowledging that burying blades in perpetuity isn’t ideal, Bratvold, the special waste technician, was surprised by some of the negative reactions when a photo of some early deliveries went viral last summer. On social media, posters derided the inability to recycle something advertised as good for the planet, and offered suggestions of reusing them as links in a border wall or roofing for a homeless shelter.

“The backlash was instant and uninformed,” Bratvold said. “Critics said they thought wind turbines were supposed to be good for the environment and how can it be sustainable if it ends up in a landfill?”

In the meantime, Bratvold and his co-workers have set aside about a half dozen blades and in coming months, they’ll experiment with methods to squeeze them into smaller footprints. They’ve tried bunkers, berms and even crushing them with the bulldozer, but the tracks kept slipping off the smooth blades. There’s little time to waste. Spring is coming, and when it does, the inexorable march of blades will resume.
Posted by arclein at 12:00 AM