Covid19 - There is no Coincidence 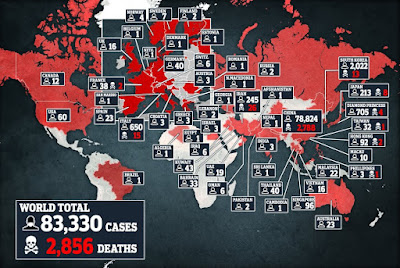 How is it that a level 4 lab in Toronto had a military grade modified virus available to be stolen by CPP scientist spies?

How is that these spies were not retained here for a long stay in prison, but instead sent back to China and the equivalent lab in Wuhan?

How then did it leak out of that Lab?  Then get distributed all through China with effective ease.  Was a large group of CCP leaders exposed?

Pandemic breaks out in China completing the causation narrative.

Decapitation targets that are already well established as useful:

As i have been posting, there is a secret WAR underway and it is global and certainly  involves taking down all aspects of the DEEP STATE and by extension the NWO.  Those 160,000 sealed indictments may well turn out to be mostly against Chinese espionage.  The extent of the threat is becoming better known.


One of the military options for the replacement of the Iranian Mullahs has been decapitation.  Unfortunately a direct strike was always going to be chancy and uncontrollable.  Suddenly one has died telling us that others have been exposed.  Just how did this occur?  It is low probability.  It screams directed delivery at the ambassadorial level.


Now the good news is that the disease appears to be somewhat stalled.  Normal social distance is keeping it at bay so far outside China.  All this tells us that this may well have been a Mil Intel operation top to bottom.  Those dying are those already deeply compromised as in elderly or seriously sick or seriously over exposed.  Thirty percent of medical staff do catch it.


Of course this is all coincidence.