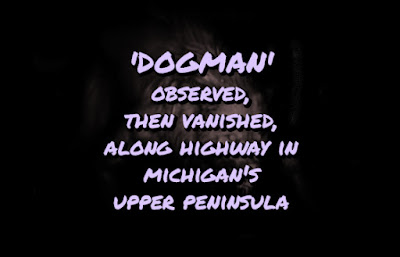 this is extremely interesting as it addresses problem of mobility.  The actual work on the fossils of the Giant Sloth certainly begs that exact question.  Now we get the best possible information.

I am surprised to discover just how fast they are.  They are clearly faster than any of their niche sharers and over a very decent distance as well.  I already understand that they can also leap through trees at serious speed.  Up to this report, i had presumed that they were likely slower. not so lucky.

We know also that they are also skilled stalkers as well, making them the likeliest source of human casualties.

Way more important is that we observed the moment the creature is able to block the observer seeing it.  The observer did not even blink here.  We ahve already posted often on this ability and now it has been seen outright.
.


'Dogman' Observed, Then Vanished, Along Highway in Michigan's Upper Peninsula


“My daughter and I were driving home in rural Michigan Upper Peninsula during the summer of 2018. We were almost home when we saw this strange black being that was running faster than animal I’ve ever seen. At first she said, 'What is that?' Then she said, 'It looks like a werewolf'. Then I paused and said, 'That may be a Dogman!'


It ran on all fours and had a long body that was very muscular. The face looked like that of a wolf in a way, but also something about it looked human. It’s hard to put in words. I kept my eyes on it the whole time. Its body seemed to be running in, like, glitches. It ran so fast, but it was also looking in our direction. My daughter was so freaked out by it! I was just kind of amazed and kept saying that was either a Werewolf or a Dogman. I could see its teeth for a second, which were that of a wolf. But the face was half-human and animal. It ran so amazingly fast, faster than any animal I’ve ever seen. The darkness of its color was also kind of strange because it was so deep black. Once it was past us, it disappeared. I never took my eyes off it once. It just vanished! This is hard to put into words what we saw and how it happened but I’m telling you, it’s the truth!


I’m 61 years old and my daughter is 41 years old. I’m not telling this for entertainment. I’m telling it because it’s the truth! It wasn’t the size of a dog because of the strange length of its body being so long compared to a normal dog. The face was bizarre being half human and half wolf. I go by this area daily and often when I’m with my daughter I ask her if she believes what we saw. She doesn’t like to even talk about it amongst just ourselves because she is still so freaked out about it and there is no one who can actually say for certain, 'yes, that is what you saw.' My first thought was Werewolf, but I’ve read stories of others in Michigan who have had these strange experiences with what is called a Dogman, so I’ll never know 100% what I saw. All I know is that it was something very strange and not normal. The reason I didn’t have that fear probably was because I was in a car. It was still very light out and it ran across the road in front of us. Although I do have to say, later on, I thought I hope it didn’t follow us home.


I think about this experience almost daily. The way it ran was so bizarre. It happened so fast, though I wish I could have captured a picture. My daughter is so spooked out about it that she still gets shaken talking about it. I believe there is lots of things out there that we just don’t know about yet!” CF
Posted by arclein at 12:00 AM