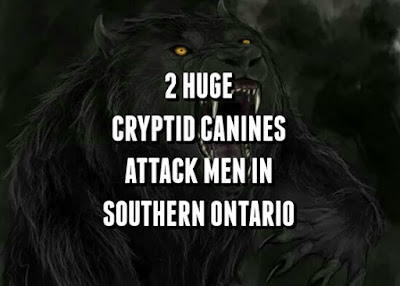 These were Giant Sloths and close by a famous historic cemetery.  The location is within fifty mile of the Boreal forest between Georgian Bay and Orillia in Ontario.  I grew up around seventy miles southwest of this.  All of it is farm country interpersed with woodlots and river bottoms providing cover for game.

What is important is the blue flash of light seen twice and associated with each creature.  We can presume both were holed up in the cemetery and this also conforms to other reports a well.  Likely a relic of past practice.  What happened is that they were maintaining a field of invisibility to avoid discovery.  This suggests that they can turn that on and even go to sleep.  Turning it off triggers a blue flash.

They then engaged in confrontation charging in order to run the interlopers off.  This common for any animal.  They then backed of when they determined that the purpose was simple gathering.  We have indication that they also read the minds of their interlopers as shown by the response to prayer.  I expected this.

A string mind to mind signal can chase them off.  Another reason for ambush hunting of larger targets.

https://www.phantomsandmonsters.com/2020/02/2-huge-cryptid-canines-attack-men-in.html?
It's the middle of the night in a secluded cornfield in southern Ontario. Four men are attempting to harvest an illegal marijuana crop, when suddenly they become a part of an incredible nightmare!

I recently received a telephone call from a nervous man who I will identify as 'RM.' He was hoping to find someone willing to listen and to consider his remarkable encounter.
+
RM and 3 other men were attempting to harvest a marijuana crop that had been planted in a cornfield. This occurred at night in October 2017. The silage corn had been tall that year, standing at 8-10 ft. But the feed corn harvest was about to take place and it was time to pull the cash crop.

I asked RM to write down what they had experienced:
+
"We got into the field and fanned out. I was farthest to the right. Straight ahead in the distance, was a blue flash of light that originated in the cemetery. It looked like it was 10-15 feet off the ground. Then a loud crashing thump, like something heavy fell. Then a few hundred feet to the left the exact same thing happened, like a blue ring-shaped flash of light.
+
These 'things' tore out of the trees and into the corn at an incredible speed. Faster than any live creature I'd ever seen move. Supernatural fast. Whatever they were then began to bluff charge me and my friends; running at me 3 or 4 times and stopping just outside of the range of direct sight, maybe 2 or 3 rows of corn away. They were as big as Grizzly Bears, and fast as race cars. They were going between me and my buddies. Then I saw the head and shoulders of the one. A large wolf-like head with pointed ears and broad shoulders. The head had no neck and was situated directly on the shoulders. It was a terrifying sight!
+
There was zero doubt in my mind as to what I had just seen. It was 10 feet away at the max! Just then it charged me from the front, and left, and then my buddie's dog came in from the right! I thought I had been flanked and almost shot the dog, who was losing her mind at the time; whining and whimpering and shaking profusely nonstop.
+
At that point I started praying to Jesus Christ, and the 2 dog creatures or whatever they were, instantly turned and high tailed it out of the cornfield back towards the cemetery.
+
So my buddies and I found each other, and the guys said that they had been being charged too. The guy who had driven us there said he had seen it. I told him I did also. I continued to pray as I looked in the direction were I saw them run off to. We had a serious job still to do. There were thousands of dollars sitting in the field. We got things harvested and wrapped up, ready to move out of there.

Well they doubled back around on us, because when my friend and I were struggling with dragging the big blue tarp full back along the tractor access route, we passed a large bush. One of these creatures was right there! My friend screams out, "There's a wolf!" As I looked up, it was running like a man on 2 legs. The creature only ran about 10 feet into the woods and stopped dead in its tracks. My friend and I were ready to go, and he says to me, "Is it coming back to get us?" I just started praying out loud again. Nothing else happened.

We dragged everything to the car. Because it's a little hatchback, someone had to stay behind. So I thought, 'well this is great!' 'There's something seriously messed up going on here, that only seems to be kept at bay by prayer.' These guys don't know I've been praying, so one of them is going to get killed if I don't stay. I think that it was the Holy Spirit protecting me. I strongly felt it.

So the Dog and I stayed behind and spent the next hour on the road, as she whined and cried and freaked out. I was praying and holding my ground. I did notice that one creature came up behind the embankment that was along the entrance to the field and stood there, pacing back and forth. I then saw other creature was now on the other side of the entrance road, behind a huge blackberry bush that hangs over the ditch. It was not more than 10 feet from us!

The dog was freaking out so badly that it almost got to me. I thought she might just drop from a heart attack. Everytime I see the dog now, I know she is remembering it too. She just gives me a look and starts shaking. She has strongly bonded to me since that day.

I was never so happy as when those headlights came back over that hill, and my friend pulled up to get us. It seemed like forever we were on that road. But in reality it may have been one hour tops.
When we got back my friend said, "Did you see the size of that dog bro?" I just said I didn't want to talk about it."

NOTE: I believe that this incident occurred because of something related to the cemetery. The cemetery was established in 1855. It was considered one of the only integrated cemeteries of its time, with black, white and aboriginal peoples all buried in it. It remained an active cemetery until 1940 and ended up falling into a state of disrepair by the 1960’s. Prison inmates were used to clear away the surrounding debris of the site however; it fell into disrepair again by the 70’s. It continued to remain in a woeful state until 1997 when a group of volunteers secured permission from the Township of Clearview to restore and maintain the site. I'd be interested to find out if other strange activity has been reported in the area. I have asked a local paranormal investigator to look into the location. Cemetery honours the early multi-racial pioneers of Sunnidale Township. Lon