How the universe could possibly have more dimensions 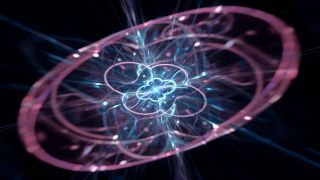 My key take home from my own work is that I can describe is all using only a 3D manifold  to imagine the Space Time Pendulum which upon creation naturally creates TIME itself.  We can nicely discard the mathematics of n dimension and rely solely upon 3D space.  My published paper provides the 3rd and 4th  order metric and by natural extension the n metric able to handle 2n vertices produced by n fundamental particles modeled by the Space Time Pendulum.

What is amazing is that ample cultural reports fully support my cosmology.

How the universe could possibly have more dimensions

By Paul Sutter a day ago

Could the universe have more dimensions than we realize?

String theory is a purported theory of everything that physicists hope will one day explain … everything.

All the forces, all the particles, all the constants, all the things under a single theoretical roof, where everything that we see is the result of tiny, vibrating strings. Theorists have been working on the idea since the 1960s, and one of the first things they realized is that for the theory to work, there have to be more dimensions than the four we're used to.

But that idea isn't as crazy as it sounds.

In string theory, little loops of vibrating stringiness (in the theory, they are the fundamental object of reality) manifest as the different particles (electrons, quarks, neutrinos, etc.) and as the force-carriers of nature (photons, gluons, gravitons, etc.). The way they do this is through their vibrations. Each string is so tiny that it appears to us as nothing more than a point-like particle, but each string can vibrate with different modes, the same way you can get different notes out of a guitar string.

But for the math to work, there have to be more than four dimensions in our universe. This is because our usual space-time doesn't give the strings enough "room" to vibrate in all the ways they need to in order to fully express themselves as all the varieties of particles in the world. They're just too constrained.

In other words, the strings don't just wiggle, they wiggle hyperdimensionally.

How can the string theory's requirement for extra dimensions possibly be reconciled with our everyday experiences in the universe?
Curled up and compact

Thankfully, string theorists were able to point to a historical antecedent for this seemingly radical notion.

Back in 1919, shortly after Albert Einstein published his theory of general relativity, the mathematician and physicist Theodor Kaluza was playing around with the equations, just for fun. And he found something especially interesting when he added a fifth dimension to the equations — nothing happened. The equations of relativity don't really care about the number of dimensions; it's something you have to add in to make the theory applicable to our universe.

But then Kaluza added a special twist to that fifth dimension, making it wrap around itself in what he called the "cylinder condition." This requirement made something new pop out: Kaluza recovered the usual equations of general relativity in the usual four dimensions, plus a new equation that replicated the expressions of electromagnetism.

It looked like adding dimensions could potentially unify physics.

In retrospect, this was a bit of a red herring.

Still, a couple of decades later another physicist, Oskar Klein, tried to give Kaluza's idea an interpretation in terms of quantum mechanics. He found that if this fifth dimension existed and was responsible in some way for electromagnetism, that dimension had to be scrunched down, wrapping back around itself (just like in Kaluza’s original idea), but way smaller, down to a bare 10^-35 meters.

The many manifolds of string theory

If an extra dimension (or dimensions) is really that small, we wouldn't have noticed by now. It's so small that we couldn't possibly hope to directly probe it with our high-energy experiments. And if those dimensions are wrapped up on themselves, then every time you move around in four-dimensional space, you're really circumnavigating those extra dimensions billions upon billions of times.

And those are the dimensions where the strings of string theory live.

With further mathematical insight, it was found that the extra six spatial dimensions needed in string theory have to be wrapped up in a particular set of configurations, known as Calabi-Yao manifolds after two prominent physicists. But there isn't one unique manifold that's allowed by sting theory.


It turns out that when you need six dimensions to curl up on themselves, and give them almost any possible way to do it, it … adds up.

That's a lot of different ways to wrap those extra dimensions in on themselves. And each possible configuration will affect the ways the strings inside them vibrate. Since the ways that strings vibrate determine how they behave up here in the macroscopic world, each choice of manifold leads to a distinct universe with its own set of physics.

So only one manifold can give rise to the world as we experience it. But which one?

Unfortunately, string theory can't give us an answer, at least not yet. The trouble is that string theory isn't done — we only have various approximation methods that we hope get close to the real thing, but right now we have no idea how right we are. So we have no mathematical technology for following the chain, from specific manifold to specific string vibration to the physics of the universe.

The response from string theorists is something called the Landscape, a multiverse of all possible universes predicted by the various manifolds, with our universe as just one point among many.

And that's where string theory sits today, somewhere on the Landscape.
Posted by arclein at 12:00 AM