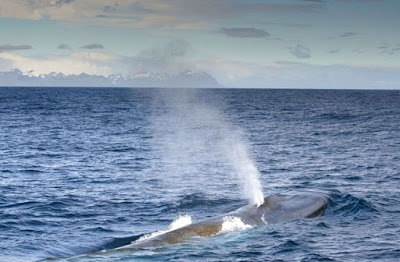 We are watching the full and steady rebound of global whale populations.  Ultimately we will also see the whole global fishery reach and surpass  historical levels as we apply our knowledge.

It is all good news generally although there is much to be done.  Not least we need to implement iron fertilization in known ocean gyres in particular to stimulate food production.  This is not even a difficult trick and compares to the natural process of using volcanic ash falls..

Gyres are important because they anchor fish migration and maturation.  Thus fertilization can stimulate a sharp increase in fish biomass.  Of course, this little bit of science continues to be ignored.

Scientists say they have seen a remarkable collection of blue whales in the coastal waters around the UK sub-Antarctic island of South Georgia.

Their 23-day survey counted 55 animals - a total that is unprecedented in the decades since commercial whaling ended.

South Georgia was the epicentre for hunting in the early 20th Century.

The territory's boats with their steam-powered harpoons were pivotal in reducing Antarctic blues to just a few hundred individuals.

To witness 55 of them now return to what was once a pre-eminent feeding ground for the population has been described as "truly, truly amazing" by cetacean specialist Dr Trevor Branch from the University of Washington, Seattle.

"To think that in a period of 40 or 50 years, I only had records for two sightings of blue whales around South Georgia. Since 2007, there have been maybe a couple more isolated sightings. So to go from basically nothing to 55 in one year is astonishing," he told BBC News.

"It's such good news to see that they might be further rebounding and coming back to places where they were formerly extremely abundant."

Dr Branch was commenting on the survey which was led by the British Antarctic Survey (BAS) with the support of the University of Auckland.

Image caption South Georgia's wildlife feeds on the train of krill moving up from the Antarctic
The institutions put together an expert team that toured the island's near-shore waters in the Research Vessel Braveheart.

The scientists identified whales of various species both visually and acoustically through their song repertoires.

In a number of cases, they even managed to retrieve skin and breath samples to understand more about the health of the various animals they encountered. Image copyright P.Ensor/BAS South Georgia Whale Project Image caption Whale science: Not just counting but getting health data as well

Blue whales are the most massive creatures ever to roam the Earth, and the Antarctic sub-species contained the very biggest of the big at over 30m.

This population was also the most numerous of the 10 or so discrete populations across the globe, carrying perhaps 239,000 individuals prior to the onset of industrial exploitation.

But the marine mammals' physical size made them a profitable catch, and around South Georgia more than 33,000 Antarctic blues were documented to have been caught and butchered, most of them between 1904 and 1925.

By the time a ban was introduced in 1966, a sighting anywhere in Southern Ocean waters would have been extremely rare indeed.

The last official estimate of abundance was made in 1997 and suggested Antarctic blues could have recovered to about 2,280 individuals. When the next assessment is released, probably at the end of 2021, it should show a further increase - as reflected in the encouraging activity at South Georgia in recent weeks.

"The exception is Antarctic minke whales; we do think they've gone down quite a bit."

What is clear however is that the moratorium on commercial whaling is working. And whatever other pressures these whale species may face today, they are gradually edging back from the brink.

South Georgia is a place they should congregate.

The territory sits in a highly bio-productive zone that is supported by a copious train of krill drifting up from the Antarctic on strong currents.

These crustaceans are the favoured diet not just of the big whales but also of the island's many penguins and seals.

Some might question whether the growth in numbers of blue, humpback and other whales around South Georgia is simply a bump that's been driven either by a short-term bounty of krill at the island or maybe by a paucity of the prey elsewhere.

"The preliminary data does not suggest it has been a particularly unusual krill year. Not this year, nor last year. It seems quite normal," she said.

"So, I think this is positive. We know that 100 years ago, South Georgia was a good place for blue whales and now, after decades of protection, it seems the territory's waters are a good place for them once again," she told BBC News.

The RV Braveheart voyage this year was funded by the Darwin Plus programme, the South Georgia Heritage Trust and the Friends of South Georgia Island. It was dedicated to the memory of the late Prof Peter Best, an English marine biologist who pioneered whale study in South African waters.

Dr Branch tracks all science on blue whales whenever it is published on the Twitter account @BlueWhaleNews. Image copyright M.Collins/BAS South Georgia Whale Project Image caption Southern right whale: Most populations' numbers seem to be moving in the right direction
Jonathan.Amos-INTERNET@bbc.co.uk and follow me on Twitter: @BBCAmos
Posted by arclein at 12:00 AM