The Age of Entitlement: The Legacy of Anti-Discrimination Laws 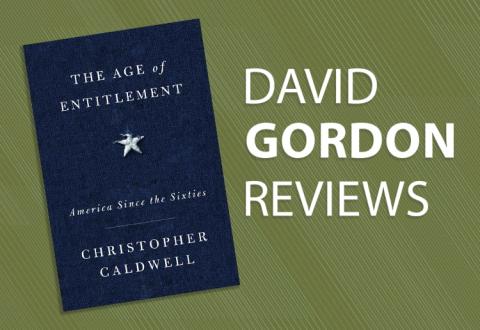 The real shock for whites were the riots in Detroit and curiously the problem was never about racism but the appearance of racial poverty.   I will go much further than that.  Northern whites and increasingly european whites have chosen to educate their children away from any form of racial MEME.

It is just that alone did not bring about social and economic assimilation right away and we still had the abhorrent institutional problems of the South to grate.  The sixties and the civil rights laws eliminated the institutional problem and made assimilation at least possible and also plausible.  All that still took time and we are now a full two generations on.  Assimilation is well established everywhere for the prospering black middle class and white resistance is simply becoming less and less.

The childish MEME of racism is by its nature difficult to eradicate as it learned early.  Yet it is also dying out i do believe.  The real problem is that it is alive and well in all other cultures and that also needs to be actively addressed.  Yet i do think that we will soon enough have our own house in order....

The real shock though is that all this leads to the MEME of the humanitarian WAR.  That is obviously crazy as we have discovered for ourselves.  The future must be about the Humanitarian CONFRONTATION instead by understanding that it is a process that can even be generational and that WAR actually reverses such processes.
.

The Age of Entitlement: The Legacy of Anti-Discrimination Laws

[The Age of Entitlement: America Since the Sixties. By Christopher Caldwell Simon & Schuster, 2020, 342 pages.]

Christopher Caldwell has written an outstanding book, although it will win him few friends in the elite journals such as the New York Times for which he often writes. He addresses a question that many have asked: why did Donald Trump, in a shock to mainstream opinion, win the Republican nomination for president in 2016 and, even more of a shock, go on to win the election?

The standard response is that enough of those Hillary Clinton called the “deplorables” turned in rage against the liberal establishment to swing first the nomination and then the election to the populist Trump. With that answer Caldwell agrees, but what are the roots of this rage? Caldwell’s analysis of this phenomenon is deep and surprising.

He traces it to the civil rights legislation of the 1960s. By forbidding private discrimination on grounds of race, the Civil Rights Act of 1964 took the first step toward the destruction of what Caldwell calls the “old constitution” by which America had been governed. As he puts it,


The changes of the 1960s, with civil rights as their core, were not just a major new element in the Constitution. They were a rival constitution, with which the original one was frequently incompatible—and the incompatibility would worsen as the civil rights regime was built out. (p. 6)

Caldwell must confront an objection. Weren’t blacks oppressed under the old system? Shouldn’t we recognize that the new legislation was needed to remedy injustice? Caldwell acknowledges that most people outside the South opposed the state-mandated segregation that prevailed there. But, and this is his crucial point, majority opinion among whites went no further. Most of them thought their own relations with blacks were fine:


Most Americans, liberal as well as conservative, saw the race problem as something distant. It had to do only, or mainly, with the exotic culture of the South, where segregation was legal….As white people in the northern and western states saw it, racial harmony had arrived long ago….As a practical matter, whites did not suspect they would see the vast increase in federal government oversight that would become the sine qua non of civil rights. (pp. 31–32)

Blacks did not view the situation in this way:


Victims see racial discrimination as a system of corruption that burdens them in a variety of practical, measurable ways—with "lack of jobs, lack of money, lack of housing." They are unlikely to view the system as repaired until those practical burdens are removed. (p. 24)

Caldwell does not condemn them for this. In fact, in thinking that ending legal discrimination would not suffice for racial harmony, they were correct. His point is a different one. Whites never "signed on" to the radically disruptive measures that blacks and government elites wanted.


Governments could now disrupt and steer interactions that had been considered the private affairs of private citizens—their roles as businessmen or landlords or members of college admission boards….[T]he government was now authorized to act against racism even if there was no evidence of any racist intent. This was an opening to arbitrary power. And once arbitrary power is conferred, it matters little what it was conferred for. (p. 33)

Other groups of the disaffected, including feminists and homosexuals, followed the path laid down by blacks. They too demanded that the government reconstruct social institutions to remove discrimination against them. Caldwell by no means denies that these groups had genuine grievances. He aims instead to stress the upheaval in the legal order that was required to satisfy these grievances, an upheaval that greatly enhanced the arbitrary power of the federal government. For example, he says of the movement for "same-sex" marriage:


It was clear that gay marriage did carry a threat, because…it overturned the understanding that marriage was something antecedent to government. On that antecedence rested the inviolability of marriages and families, the convention that what they did, how they built their little micro-community of love, was none of the government’s business. Overturning this understanding did not immediately damage any heterosexual marriages. But it diminished and threatened marriage as an institution. (pp. 121–22)

It did so by leaving it to the federal government to define marriage and parental rights.

Someone might object to Caldwell along these lines. "It is true that under the new dispensation, old rights have been curtailed. People cannot use their right of freedom of association to discriminate against 'protected' groups, nor does their right of free speech override the 'political correctness' that dominates universities. But this does not give us good reason to return to the past. We need to ask, what really are the rights that people have?"

Caldwell’s answer to this objection is not altogether satisfactory. He seems to say that questions of right and wrong cannot be settled objectively:


These are matters of perspective. There is no point in describing one interpretation as morally "right" or "wrong." (p. 25)

Instead, Caldwell largely confines himself to alerting us to what has been given up. Besides restrictions on freedom of association and speech, people no longer live in a stable constitutional order. No fixed principles of constitutional interpretation limit the federal government. Further, aggrieved groups act undemocratically in seeking to alter customary ways of doing things.

Caldwell is right to stress the costs of what has been given up, but a convincing reply to those who think the price worth paying must appeal to the moral truth of the matter. To deny that moral truth is accessible to us is itself a moral position that needs to be supported by argument. I do not doubt that Caldwell would have valuable things to say, were he to give us his own account of morality, but he does not do so here. This weakens the normative weight of what he says, though it leaves intact his descriptive account of the populist backlash against the new constitutional order that led to Trump’s victory. A correct account of the scope and limits of freedom of association would to my mind largely vindicate his understanding of the matter. Caldwell’s emphasis on freedom of association merits our applause, but one wonders what happened to this right when Caldwell bemoans the fate of American workers who have lost their jobs through "outsourcing." If workers are free to accept or reject an offer of employment, why are not employers equally free to make or refuse such an offer?+


The book is filled with insights, and I shall end with one that is especially valuable. Caldwell notes that the spread of the elitist anti-discrimination system throughout the world has become a dominant motif of American foreign policy.


The task that civil rights laws were meant to carry out—the top-down management of various ethnic, regional, and social groups—had always been the main task of empires. At the turn of the twenty-first century, the real place of the Vietnam War in the history of American diplomacy became much clearer….[I]t had merely been one of the less successful of the experiments in global "governance"that the United States was doomed by its imperial position to make. It laid the groundwork for the "humanitarian invasions" of the 1990s and beyond. (pp. 161–62)

Caldwell has braved the perils of conformity, and his outstanding intelligence in doing so matches his courage.

Author:
Contact David Gordon
Posted by arclein at 12:00 AM