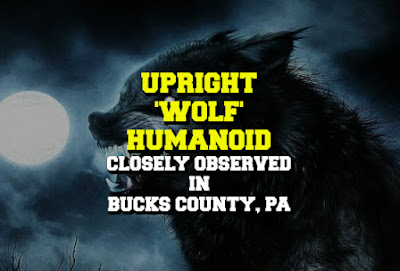 What makes the giant sloth so compelling is that it has long powerful limbs and the ability to grab a large tree limb with either foot or hand with its three large claws. Just as obviously, any creature so armed can readily tear you apart.  Yet it is also an ambush hunter and is able to block your mind as well.

Worse, they do hunt us.

Here we get a great view of one moving rapidly and performing to its limits.
.

I recently received the following report:

My boyfriend at the time and I were driving in Doylestown, PA in 2016 when we saw a upright arched back dog or wolf-like creature run across the road. It had long arms but was on two feet and it jumped up with both feet/legs at the same time like a hop, but it jumped high onto the wall on the other side of road then jumped straight up and out into the woods beyond the wall. We both saw this and couldn’t figure out what it could be. It was dark out so we couldn’t see where it went and didn’t really want to. It was a creature that neither of us ever seen or knew to exist. CM

I replied back to CM and received the following:

Absolutely I will talk with you. I never questioned what I saw. My ex-boyfriend, whom I am good friends with still, can verify this experience. When I decided to Google wolfman or dogman creature/entity to see if it was possible that someone else may have seen something similar, I found a few sites including your website. It’s validating to see others in Pennsylvania have seen similar creatures. I never minded telling people what I saw that night, I am sure some thought I was little crazy, but I don’t care I knew what I saw.

The exact spot I saw this in screenshots provided. Old Easton Rd, next to the Water Wheel Tavern in Doylestown PA. It was seen on the bridge that is now being restored and under construction right next to restaurant. The red x’s are where the creature ran from left to right with incredible speed and the the red swoops are where it jumped like a kangaroo straight up with its two legs, paused very briefly and then jumped into a wooded area like it was a monkey that could swing from whatever it landed on. Like I said it was dark and I couldn’t see where it landed. Talk to you soon. CM

NOTE: I talked to CM the next day. This incident occurred in mid-June 2016 at approximately 1 am local time. CM and her boyfriend were on their way home, driving north on Old Easton Rd. in Doylestown, PA in Bucks County. The creature crossed in front of them on the bridge crossing at Pine Run at approximately 50-60 ft. They had a very good look at the beast which was illuminated by the headlights.

They both described it as 4 1/2 - 5 ft in height with muscular dog-like legs (biped) with human-like feet. The body was humanoid in shape, though there was a distinct arched back. The arms were very long reaching near mid-leg and muscular with prominent human-like hands. The head was canine and looked like that of a wolf with a dark heavy mane that extended down the back. It looked at the couple exhibited eyeshine. No discernable eye color. It also had a tail and was covered in dark grayish fur. This may have been a juvenile since the height is significantly shorter that most other sightings.

Below are the map images provided to me. I have included images of the tavern and the wall on the bridge.

This report will be added to the PA Upright Canine/Dogman Witness Sightings Map. Lon 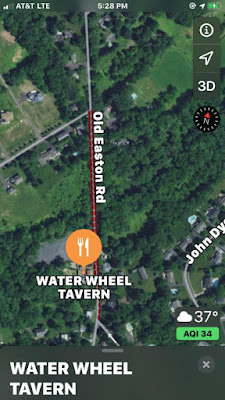 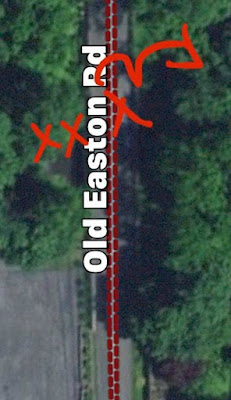 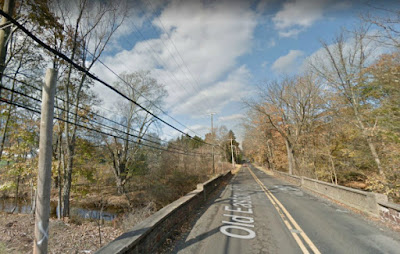