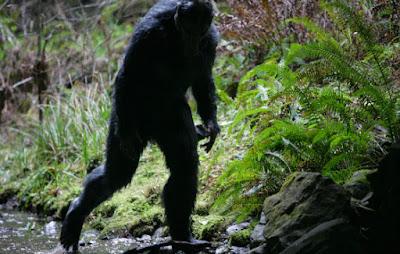 This is hilarious.  It is also about as close as we have ever come to striking up a conversation.

I do think that the way forward with the Sasquatch in particualr is to strike up trade with them .  They clearly enjoy apples and may even enjoy using a nearby logbhut to take cover in or even den up in.  All these can show good will.

If we finally start grooming the forests, their help would be great.  after all we  do want to take of  limbs up to fifteen feet at least in most forests and ultimately up to even forty feet for future clean saw logs.


Monday, February 03, 2020
I received the following email many years ago:

My question to you is 'have I seen something unusual?'

In August of 2006, I was working in Northern California and was interested in finding Bigfoot prints. I have a friend who is a member of the Hoopa First Nation. I contacted him and then spoke to an elder. I was taken to an area where some footprints had just been found. Being skeptical, I took my right boot off and stepped down next to the foot print. I am 7' 1" tall and weigh 395 pounds and wear a size 17 street shoe or a size 19 boot (as boot sizes are often mislabelled). I am of Lakota Sioux lineage and speak a number of First Nation languages.

After putting on my boots, we heard a screaming howl. My friends started saying Oh-mah was coming and we had to leave. My friend Dave told his elder about what I had done and we went back to the site three hours later. There were numerous large footprints surrounding mine and what I believe to be a large finger hole in the middle of my footprint.

I was contacted a couple of weeks later and invited back to the reservation as they normally lose a good portion of their apple crop to Oh-mah but in 2006 they didn't lose anything. They wanted to know if I could come back every year and walk around barefoot to intimidate Oh-mah and if I have any big friends my size.


Oh-mah either saw me with the much shorter native people and thought I was another Oh-mah or recognized the footprint as a threat. The elder thought Oh-mah didn't want a confrontation with something almost as big as he and left the area.


I have spoken with some so-called experts from the BFRO and from the Bigfoot Discovery Project and got laughed at but then they wanted me to come with them and speak to the Bigfoot via bull horn in either native language. I rather not be used by someone who is too narrow minded for me to speak to the kononpaiochis (literally the people of the north who don't comb their hair -- Bigfoot).

NOTE: I have been told that the native tribes in this area (Hupa and Yurok) both use the name 'Omah' or 'Oh-mah' translated as 'boss of the woods.' Lon
Posted by arclein at 12:00 AM