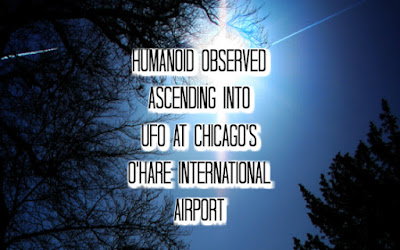 The airport is the perfect place to handle a retrieval..  All transport gets us into what is a nexus.  The actual pick up point can be planned out and all the traffic allows you to join a radar cloud as well.  All this before you just happen to have the correct codes as well to communicate.

In short, you can handle common enough retrievals in plain sight.  I actually expected this to be going on and this is direct confirmation.  It was the obvious thing to do once you understand that disguised visitors are out and about.

Recall that black eyed children could easily be disguised Greys, well known to UFO lore.  Then there is the other seventy or so known types reported by Hillyer. Quite a number are easily able to pass with a modest effort well within our own expectations.  Just so long as they avoid long interviews.  And who is looking?

Besides, a lot of sightings are touristy..

The following report was forwarded to me by Manuel Navarette at UFO Clearinghouse:

Date of the sighting: January 23, 2020
Time of the sighting: It was about 1 in the morning.
Weather Conditions: Cold and Clear
Shape of the object: Egg Shaped
Distance from the object (In Feet): 301-500
Approximately how large was the object? (in Feet): 20-30
Were any entities seen during this sighting?: Yes

I was outside taking a smoke break and was on the phone with my girlfriend when I saw this thing pass over me. It was completely silent but it was also extremely bright. As it passed over shafts of light were coming from this thing and going to the ground. It was moving very, very fast and then stopped right above that old cemetery that sits inside the airport. Then a brilliant blue light come from this thing toward the ground. It looked like someone was shining a super-bright spotlight down from the sky toward the ground.

It was then that I saw something rising up toward the object and it disappeared after about 5 seconds. It looked like it was a person but I was standing too far away to get a good look at it. I can tell you that it looked a lot like a person getting sucked up into this thing. This object then rotated in place and within 3 seconds, this thing flew up toward the north and was gone within a second. I’m telling you man, it was the strangest thing I have ever seen in my entire life!

I stood there looking as it faded out and stayed out there for a few minutes before coming back to my senses and going to back inside. I work over at the *redacted* and this thing looked like it was over by the cemetery. If you want to, I will show you where it is. A lot of people don’t even know this place is out there.

This is not the first time I have ever seen things in the sky and I know that a lot of the people I work with here during the night shift have seen lots of strange things here at this airport. It seems to attract a lot of weird things.

I spoke with the gentleman who submitted the report via phone and he explained that he worked the night shift and during downtime, he would walk outside to take a smoke break. It was during one of these smoke breaks as he was talking on his phone that he first noticed the lights from the object that he claimed flew overhead. He claimed the object was egg-shaped and he estimated that the object was about 40 feet in diameter and about 10-15 feet high. The witness claimed the object was silent and was shooting rays of light toward the ground. He says he watched as it flew overhead and stopped above the Resthaven Cemetery.

The witness went on to tell how the humanoid that was taken aloft disappeared in the brilliance of the light and that within a second or two, the light ceased and the object began to rotate in place in a clockwise motion. The object then shot off in a northerly direction and was out of sight within a few seconds. The witness stated that he walked back into the building, not wanting to be outside anymore. The witness stated that he did not venture outside again until the sun had begun to rise. The witness stated that many of his colleagues have seen many strange things during the overnight hours around the facility where he works including strange orbs, lights in the sky not associated with airport activities. When asked if he had seen or had heard about any flying humanoid sightings, he advised he had not.

The witness seemed genuine and when asked further questions did not stray from his original sighting.
Posted by arclein at 12:00 AM