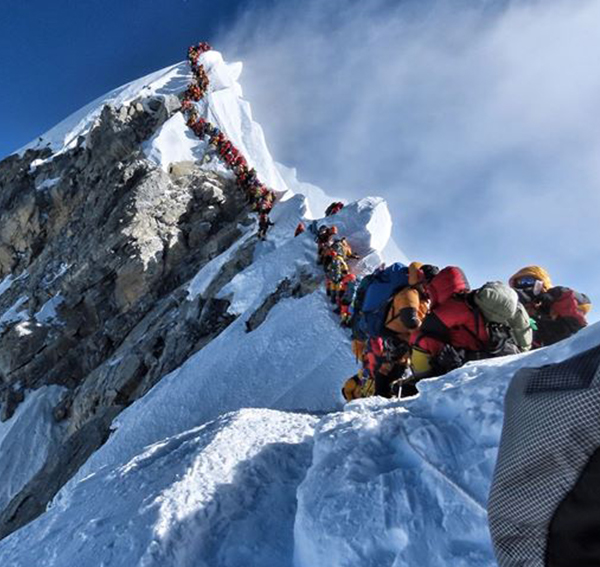 Yikes.  This is obviously becoming far too much.  Cleaning up the mess is the least that needs to be done.  All forms of mountaineering is prone to sudden death.  A simple misstep caused by dropping your guard when you appear to be safe.  It is all so unforgiving.

What is worse, on the summit you are in extremis as well which makes enjoying the experience difficult.  And of course the actual retreat is as difficult as the ascent.

Yet there is real merit in driving an access adit well down the mountain and rising an elevator shaft up to the peak itself.  All this is well within our engineering capability.  Then establish additional access points from the shaft to produce condo complexes on the mountain slopes where it is safe to do so.

All crazy, but this is now crazier.  There is actually huge demand for alpine residences if it could be properly achieved without massively expensive roads access that only provides limited access. .

Growing crowds have turned the world’s tallest mountain into a valuable commercial asset. But where’s all the money going?

It is said that from the 29,029-foot summit of Mount Everest, you can see the curvature of the Earth. But for the hundreds of climbers who vie to scale it, there’s another curve at play: that of supply and demand.

In a relatively short period of time, the world’s tallest mountain has been transformed from a jagged, inhospitable beast into a valuable commercial asset.

For the impoverished country of Nepal, Everest is now a multimillion-dollar industry, fueled by Westerners with a thirst for conquest and $100k to burn. What was once a desolate landscape is now littered with $550 oxygen tanks, thousands of pounds of frozen excrement, and 200+ dead bodies.
In the last 20 years, Everest has seen nearly a 10x increase in traffic — with more than half of all 10,055 summits coming in the last decade. In 2019 alone, a record-setting 876 summiteers caused a traffic jam that contributed to 11 fatalities

How did Mount Everest get so crowded? Why is it so expensive to climb? And where exactly does the money go?

To find out, we spoke to nearly a dozen Everest historians, mountaineers, and top guides — many of whom are preparing for the climbing season in May.

The commercialization of Mount Everest

When Tenzing Norgay and Edmund Hillary first reached the summit of Everest in 1953, mountaineering was a sport reserved for alpine clubs, national expeditions, and scientific pursuits.

For decades, the governments of Nepal and Tibet (which share access to Everest) denied access to most foreign climbers. Throughout the 1980s, access was limited to one Everest permit per season.
But in the early 1990s, everything changed.

Realizing that there was a business opportunity in leading Western adventure seekers up Everest, climbers like Rob Hall (Adventure Consultants) and Scott Fischer (Mountain Madness) convinced Nepalese officials to expand foreign access. John Krakauer’s 1997 bestseller Into Thin Air, which chronicled the death of 8 climbers (including Hall and Fischer) on one of these early expeditions, only further stoked demand.

“All of a sudden, people with money discovered they could hire a professional mountain guide with sherpa support and go have a chance to summit the world’s tallest peak,“ says Alan Arnette, a mountaineering coach and Everest expert.

By the mid-2000s, dozens of Western guides had set up expedition companies. Soon, traffic ballooned from 50-60 to 500+ climbers per year.

One of the poorest countries in the world, Nepal now earns tens of millions of dollars from Everest. Its tourism industry, largely driven by Himalayan treks, accounts for ~10% of its $24B GDP.

And despite a growing number of overcrowding concerns, the government, eager to maximize revenue, has refused to put a cap on the number of permits ($11k per climber) it issues each year.

How much does it cost to climb Everest?

An Everest journey begins with a flight from Nepal’s capital, Kathmandu, to the small village of Lukla. Over the course of 6 to 8 weeks, climbers make their way up the mountain via a series of high-altitude camps, then wait for a short window of good weather to push for the summit.

To make the trek, a prospective climber must book a trip with one of the 50+ companies that offer guided tours up the mountain. The cost of this trip can wildly vary, but Arnette says “it costs at least as much as a car.”

An analysis of the market shows that Everest packages run anywhere from $35k to $160k, but the average Western operator charges $66k.

This price includes all of the Everest-associated fees levied by the Nepalese government: $11k per climber for a permit, $3k for a liaison officer (who certifies each climb), $2.5k for icefall doctors (Nepalese climbers who secure the route), a $2.5k facilitation fee, and a $4k garbage deposit.

In addition to the $66k guide fee, most climbers spend another $10-15k on gear (full down suit, mountaineering boots, crampons, sleeping bag), airfare, evacuation insurance, satellite phone service, and the 18 months or so of training required to make a summit bid.

The supported nature of the modern Everest climb — extra oxygen, Sherpas to carry gear, and top-of-the-line equipment — has made the peak “more attainable,” says Arnette. Today, 29% of all Everest hopefuls successfully summit. Around 4% die.

For guides, all these extra safety precautions take a toll on the bottom line.

“From a business perspective, Everest is not one of our more profitable trips,” says Gordon Janow, director of programs at Seattle-based Alpine Ascents.

This year, Janow and his team expect to take 8 climbers up Everest. The trip will require 2 guides ($35k each), 8 sherpas ($5k each), and a camp cook ($6k), in addition to other expenses like permits, oxygen, and equipment.

Janow estimates that Alpine Ascents only makes $7k-14k on the $70k each climber pays — a 10%-20% margin — before taxes and administrative expenses.

But recently, a new “threat” has cropped up for Western guides: a groundswell of much cheaper trips offered by local Nepali companies.

A trend: Everest for half the price

Sherpas, the legendary elite mountaineers native to the Himalayas, are hired by Western guides to accompany expeditions — usually at a 1:1 Sherpa-climber ratio.

Their jobs are especially risky, as they are tasked with climbing up ahead of the group, installing ladders in place over crevasses, and carting up to 60 pounds of gear up the mountain with little supplemental oxygen.

Of the 304 total deaths on Everest, 119 (39%) have been Sherpas, far more than any other nationality. In 2014 alone, 16 Sherpas were killed by an avalanche while fixing ropes in the notorious Khumbu Icefall.

For a season of work, they are paid around $5k— considerably more than the $700/year average salary in Nepal, but far less than Western guides.

But in the last 5 years, a young generation of Sherpas, tired of playing the middlemen, have launched their own expedition companies and undercut the Western guides.

“They stood up and said, ‘Why are we working for the man? We have the ability to do all of this for ourselves,’” says Arnette. “And they blew up the business model.”

These Nepali-run companies charge around $38k (40% less than a Western guide). This lower price point has attracted a whole new market: emerging middle-class climbers in China and India.

According to some Western guides, there is a serious issue with this new crop of guides: They’ll take absolutely anyone up the mountain, regardless of experience, and cut corners on safety standards.

“They have the attitude of, ‘I can teach you all you need to know on the climb; just give me your money,’” says Janow. “They don’t care at all about skill level.”

One such guide, Seven Summit Treks, which offers tours for as little as $35k, writes on its website that it will take anyone with a “strong economic background to compensate for [old age and fear of risks].”

While other companies generally cap their groups at around 20 climbers, Seven Summit Treks is known to take as many as 100 climbers up the mountain — many of whom are unprepared for the altitude and physical exertion.

Furtenbach, a European guide, says that much of the congestion on Everest in recent years can be attributed to “inexperienced clients and unprofessional operators who cut corners to make more profit.”

Of the 11 deaths on Everest in 2019, 7 were climbers with lower-cost guides. Arnette says that the majority of these fatalities were due to “avoidable” causes like exhaustion and altitude sickness.

On Everest, even these deaths come at a premium. Retrieving a body is an extremely challenging endeavor that requires as many as 10 Sherpas and can cost up to $70k. Most corpses are left on the mountain; some, like “Green Boots,” become immortalized as trail markers.

The inherent risk in scaling a 29,029-foot mountain has not detracted from the mountain’s allure. On the contrary, in the wake of especially disastrous years — like 2006 (11 deaths) or 2012 (10) — the mountain has attracted more climbers.

“Everest is like a light to a moth,” says Arnette. “The more dangerous it is, the more allure it has for aspiring mountaineers.”

In particular, Everest seems to have found a special place in the hearts of thrill-seeking business executives, who some say “pay their way up the mountain” then “turn their journeys into keynote speeches.”

In May of 2018, Greg Penner, the chairman of the board at Walmart, summited Mount Everest donning a company flag. “Going big, taking risks, never giving up and succeeding,” he told shareholders 10 days later. “That’s what Walmart –– that’s what you, our associates –– are all about.”

Business school case studies often champion mountaineering as the ultimate teamwork exercise. “[Mountaineering] looks a lot like, say, a startup, where you’re trying to maximize to become a unicorn while at the same time trying to make sure the small details don’t pull you under,” a 2019 Stanford report concluded.

But the old-school climbers aren’t sold on the metaphor.

From afar, they’ve watched Everest devolve into a chaotic queue line, clogged with “bucket listers” who have no interest in the romance or history of the mountain. Once among the moths, many of them have moved on to brighter lights.

“Most professional climbers thumb their noses at Everest and call it a tourist route,” says Arnette. “It’s now the mountain that people love to hate.”