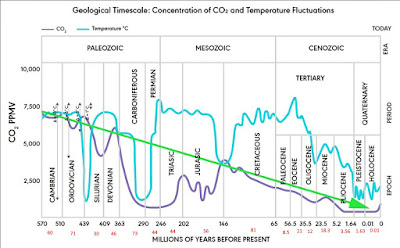 I have to thank Dr Patrick Watson for reminding me about this and how amazing important it all is.  It also elucidates the genesis of human produced Pleistocene nonconformity.

When life first began on Earth, the atmospheric carbon content was over 7500 ppm.  That is a full twenty time greater than the present 400 ppm.  We also know where all of it went.  The vast majority is tied up in carbonate rocks along with a little in coal and oil.

The geological trend is toward a zero atmospheric carbon world.  And yes folks this is settled science in every way possible.

Now for the really bad news.  It hit 280 during the ICE Age and that just happens to be the level in which plants start to fully die off.  It is completely plausible that all plant life would be largely extinct if this state of affairs were to continue for even another million years.  At the least the ICE Age had to be ended.  This drove a LIFE decision to impact the Pole and shift the crust south through Hudson Bay with a comet impactor we are now discovering and which i call the Pleistocene Nonconformity which i first developed before 2005, but published here when i launched this blog in 2007..


I already knew full well that it was deliberate, timed and targeted.  I did not understand that we had a compelling motive.  Now we know why and more completely understand the human role in Terra-forming Terra itself.  Warming the Northern Hemisphere has released plenty of CO2 and we have now recovered to 400 ppm.

Before we are finished, we will be reforesting all the deserts.  That will take a lot of Carbon.  it will also warm the Earth a little more.  So that is coming.   It also makes plenty of sense, knowing all this to keep the hydrocarbons burning, particularly as a cheap convenient heating source for our future population of 100,000,000,000 on land.  Long term we will continue a program of liberating a lot of geological carbon in order to bring it all back to 1000 ppm..