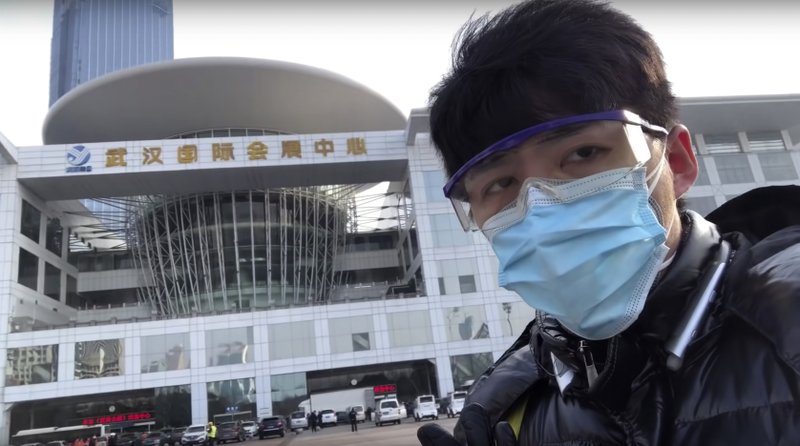 I am slightly optimistic this 15 Feb 2020.  The lock down that has taken place on travel has been in effect for some time and the next two weeks should resolve the whole picture. Yet the actual apparent numbers are disturbing, but may well reflect the reaction of the authorities themselves.


If the virus were in fact as dangerous as has been claimed, no one in the security system would stick their heads out of their station.  Yet here they are chasing after a reporter who is likely infected.

The other good news is that if the infection does hit, if opens observable voids in the lungs which can be obviously detected and focus treatment.  Still nasty but also helpful in judging a response.

With a fifteen day apparent incubation period we know that the next two weeks should tell us if we have hot spots globally.  Let us hope it simply fades now.

By JOHN LEICESTER and DAKE KANGtoday

In this image from video taken Feb. 4, 2020 and released by Chen Qiushi, Chinese citizen journalist Chen Qiushi speaks in front of a convention center-turned makeshift hospital amid a viral epidemic in Wuhan in central China's Hubei province. Armed with smart phones and social media accounts, Chen and other citizen journalists in China are telling stories from the deadly epidemic in their own words, defying the ruling Communist Party's monopoly on information. Chen disappeared last week after garnering millions of views online. (Courtesy of Chen Qiushi via AP)

BEIJING (AP) — After nearly a week of roaming China’s epidemic-struck city, filming the dead and the sickened in overwhelmed hospitals, the strain of being hounded by both the new virus and the country’s dissent-quelling police started to tell.


Chen Qiushi looked haggard and disheveled in his online posts, an almost unrecognizable shadow of the energetic young man who had rolled into Wuhan on a self-assigned mission to tell its inhabitants’ stories, just as authorities locked the city down almost three weeks ago.


Until he disappeared last week, the 34-year-old lawyer-turned-video blogger was one of the most visible pioneers in a small but dogged movement that is defying the ruling Communist Party’s tightly policed monopoly on information.


Armed with smart phones and social media accounts, these citizen-journalists are telling their stories and those of others from Wuhan and other locked-down virus zones in Hubei province. The scale of this non-sanctioned storytelling is unprecedented in any previous major outbreak or disaster in China. It presents a challenge to the Communist Party, which wants to control the narrative of China, as it always has since taking power in 1949.


“It’s very different from anything we have witnessed,” said Maria Repnikova, a communications professor at Georgia State University who researches Chinese media.


Never have so many Chinese, including victims and health care workers, used their phones to televise their experiences of a disaster, she said. That’s partly because the more than 50 million people locked down in cities under quarantine are “really anxious and bored and their lives have pretty much stopped.”


Official state media extol the Communist Party’s massive efforts to build new hospitals in a flash, send in thousands of medical workers and ramp up production of face masks without detailing the underlying conditions that are driving these efforts.


Chen did just that in more than 100 posts from Wuhan over two weeks. He showed the sick crammed into hospital corridors and the struggles of residents to get treatment.


“Why am I here? I have stated that it’s my duty to be a citizen-journalist,” he said, filming himself with a selfie stick outside a train station. “What sort of a journalist are you if you don’t dare rush to the front line in a disaster?”


A video posted Jan. 25 showed what Chen said was a body left under a blanket outside an emergency ward. Inside another hospital, he filmed a dead man propped up on a wheelchair, head hanging down and face deathly pale.


“What’s wrong with him?” he asked a woman holding the man up with an arm across the chest.


“He has already passed,” she said.


In an anguished video post near the end of his first week in Wuhan, he said police had called him, wanting to know where he was, and questioned his parents.


“I am scared,” he said. “I have the virus in front of me, and on my back, I have the legal and administrative power of China.”


His voice trembling with emotion and tears welling in his eyes, he vowed to continue “as long as I am alive in this city.”


“Even death doesn’t scare me!” he said. “So you think I’m scared of the Communist Party?”


Last week, Chen’s posts dried up. His mother broke the silence with a video post in the small hours of Friday. She said Chen was unreachable and appealed for help in finding him.

Later that evening, his friend and well-known mixed martial artist Xu Xiaodong said in a live broadcast on YouTube that Chen had been forcibly quarantined for 14 days, considered the maximum incubation period for the virus. He said Chen had been healthy and showed no signs of infection.


On Sunday, Xu tweeted that despite pleading with authorities for a call with Chen, he and others haven’t been able to get in touch.


Police also came knocking last week for Fang Bin, who has been posting videos from Wuhan hospitals, including footage of body bags piled in a minibus, waiting to be carted to a crematorium.


Fang, a seller of traditional Chinese clothing, filmed a testy exchange through the metal grill of his door with a group of four or five officers. The footage posted on YouTube offered a glimpse into how the security apparatus is working overtime to keep a lid on public anger about the spread of the virus.


Chen re-posted that video on his Twitter feed — one of his last tweets before his disappearance.


The death of a Wuhan doctor last week focused attention on earlier attempts to suppress speech, and its consequences. Police had accused Dr. Li Wenliang of spreading rumors after he raised alarm in December about the outbreak. He succumbed to the virus, bringing an outpouring of grief, along with anger at authorities for how he had been treated.


For Gao Fei, a migrant worker detained after criticizing Chinese President Xi Jinping over the virus outbreak, the doctor’s death and Chen’s disappearance are “a wake-up call for the Chinese people.”


“The number one reason our government couldn’t control this is because they always conceal the truth and block information from citizens,” he said from his hometown in Hubei.


Gao, a welder who had rushed home from southern China right before the lockdown, went to hospitals and drugstores and shared what he saw online. After tweeting that Xi’s measures were against humanity, he was detained with drug users and a “rumormonger” who pointed out overcrowded hospitals.


He admires Chen’s bravery and push for social progress. “He’s the spine, the backbone of China,” Gao said.


Since graduating from law school in 2007, Chen has worked as a waiter, hotel cleaner, voice actor, police reporter, and eventually, a TV host, launching a budding media career. He passed the bar in 2014 and began practicing in Beijing,


In 2018, Chen started a video blog on Douyin, the Chinese version of TikTok, and quickly amassed over a million fans for his legal commentary.


He ran into trouble last year after posting videos of pro-democracy protests in Hong Kong. Traveling to the semi-autonomous Chinese city, he attended both a patriotic pro-Beijing rally and a protest march, showing both sides to give his mainland audience a balanced perspective. In response, authorities shut down his Chinese social media accounts and called him back to the mainland.


From Wuhan, Chen has broadcast on YouTube and Twitter, which are blocked in China. Only people who use a virtual private network, or VPN, can see the videos. His YouTube page sports the motto: “Don’t sing the praises of the wealthy and powerful, speak only for the common people.”


Some of his posts were tinged with dark humor. Chen posed in a plastic bottle with its bottom cut off over his head, looking like a spaceman. He showed two men, one wearing a sanitary towel, the other incontinence pants, in lieu of sold-out face masks.


Leicester reported from Paris.
Posted by arclein at 12:00 AM