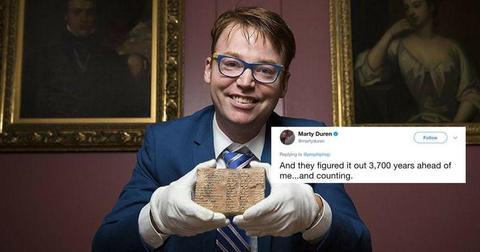 Firstly, around forty years ago, i sat down and recontructed Bronze Age mathematics in order to replicate the known results showing up in the archeology.  It made two chapters in my unpublished manuscript 'Paradigms Shift'.
Without the use of zero, you rely totally on ratios and known relationships.  Larger numbers are built by doubling and tripling.  Smaller numbers demanding halving a lot.  All this is practical and was used by everyone.

Clearly a chart of ratios with associated angles become useful.  Thus none of this is even a surprise.  In fact i had finished my efforts on this just before the 1986 Expo in Vancouver.  I went to the Egyptian display and found that they had an ancient measuring 'yard' stick.  I was literally able to confirm my own work by walking around to the back and observing the necessary marks on the back

Dr. Daniel Mansfield and his team at the University of New South Wales in Australia have just made an incredible discovery. While studying a 3,700-year-old tablet from the ancient civilization of Babylon, they found evidence that the Babylonians were doing something astounding: trigonometry!


Most historians have credited the Greeks with creating the study of triangles' sides and angles, but this tablet presents indisputable evidence that the Babylonians were using the technique 1,500 years before the Greeks ever were.


Mansfield and his team are, understandably, incredibly proud. 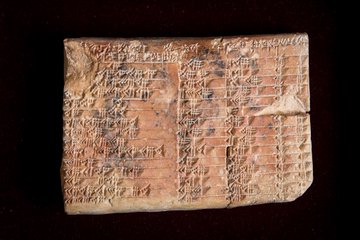 What they discovered is that the tablet is actually an ancient trigonometry table.


“The huge mystery, until now, was its purpose – why the ancient scribes carried out the complex task of generating and sorting the numbers on the tablet. Our research reveals that Plimpton 322 describes the shapes of right-angle triangles using a novel kind of trigonometry based on ratios, not angles and circles. It is a fascinating mathematical work that demonstrates undoubted genius."


“The tablet not only contains the world’s oldest trigonometric table; it is also the only completely accurate trigonometric table, because of the very different Babylonian approach to arithmetic and geometry. This means it has great relevance for our modern world. Babylonian mathematics may have been out of fashion for more than 3,000 years, but it has possible practical applications in surveying, computer graphics and education. This is a rare example of the ancient world teaching us something new.”


The tablet predates Greek astronomer Hipparchus, who has long been regarded as the father of trigonometry. Mansfield's colleague, Norman Widberger, added:


“Plimpton 322 predates Hipparchus by more than 1,000 years. It opens up new possibilities not just for modern mathematics research, but also for mathematics education. With Plimpton 322 we see a simpler, more accurate trigonometry that has clear advantages over our own.”


"A treasure trove of Babylonian tablets exists, but only a fraction of them have been studied yet. The mathematical world is only waking up to the fact that this ancient but very sophisticated mathematical culture has much to teach us.”


People were understandably excited by the news.
Posted by arclein at 12:00 AM