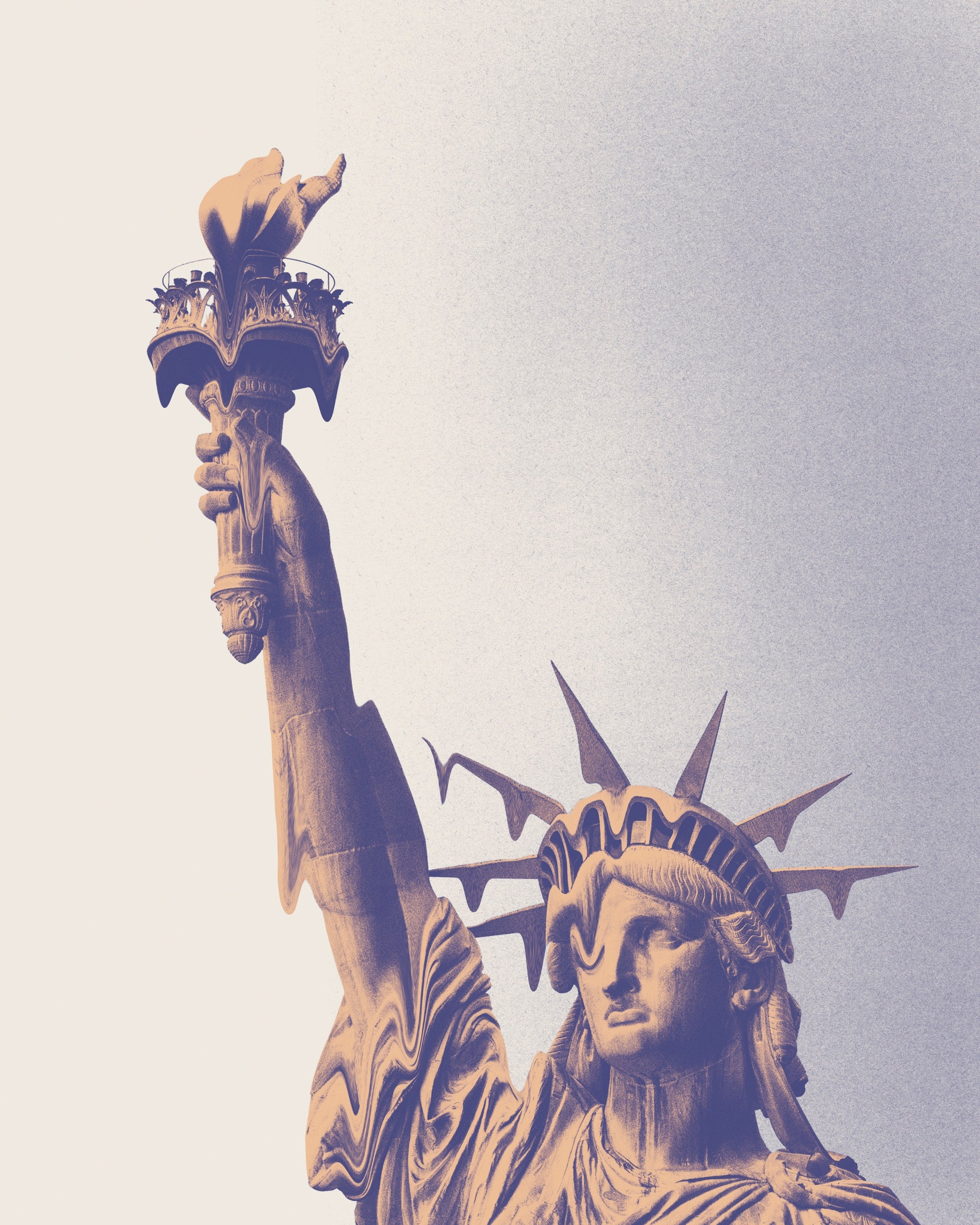 The degree to which all political dispensations were under attack during the Great Depressionm is almost forgotten, even by my generation which expereinced none of it either.

This matters of course not least because then  there were serious antagonists at war with the idea in the form of the Reds and the Fascists.  Both were initially Successful in creating command economies that sort of employed the population and it took time for the political overhead to bite deep.

Today we do have an underground political movement that is communist inspired that is been routed out.  It is just as opposed to any form of democracy and has meddled accordingly.  I do not expect it to prevail because the Demos is now awakened.

Viva WE THE PEOPLE.

Learning from the upheaval of the nineteen-thirties.

It’s a paradox of democracy that the best way to defend it is to argue about it.
Illustration by Joan Wong; photograph by Massimo Lama / Getty
The more argument the better is what the North Carolina-born George V. Denny, Jr., was banking on, anyway, after a neighbor of his, in Scarsdale, declared that he so strongly disagreed with F.D.R. that he never listened to him. Denny, who helped run something called the League for Political Education, thought that was nuts. In 1935, he launched “America’s Town Meeting of the Air,” an hour-long debate program, broadcast nationally on NBC’s Blue Network. Each episode opened with a town crier ringing a bell and hollering, “Town meeting tonight! Town meeting tonight!” Then Denny moderated a debate, usually among three or four panelists, on a controversial subject (Does the U.S. have a truly free press? Should schools teach politics?), before opening the discussion up to questions from an audience of more than a thousand people. The debates were conducted at a lecture hall, usually in New York, and broadcast to listeners gathered in public libraries all over the country, so that they could hold their own debates once the show ended. “We are living today on the thin edge of history,” Max Lerner, the editor of The Nation, said in 1938, during a “Town Meeting of the Air” debate on the meaning of democracy. His panel included a Communist, an exile from the Spanish Civil War, a conservative American political economist, and a Russian columnist. “We didn’t expect to settle anything, and therefore we succeeded,” the Spanish exile said at the end of the hour, offering this definition: “A democracy is a place where a ‘Town Meeting of the Air’ can take place.”

No one expected anyone to come up with an undisputable definition of democracy, since the point was disputation. Asking people about the meaning and the future of democracy and listening to them argue it out was really only a way to get people to stretch their civic muscles. “Democracy can only be saved by democratic men and women,” Dorothy Thompson once said. “The war against democracy begins by the destruction of the democratic temper, the democratic method and the democratic heart. If the democratic temper be exacerbated into wanton unreasonableness, which is the essence of the evil, then a victory has been won for the evil we despise and prepare to defend ourselves against, even though it’s 3,000 miles away and has never moved.”


The most ambitious plan to get Americans to show up in the same room and argue with one another in the nineteen-thirties came out of Des Moines, Iowa, from a one-eyed former bricklayer named John W. Studebaker, who had become the superintendent of the city’s schools. Studebaker, who after the Second World War helped create the G.I. Bill, had the idea of opening those schools up at night, so that citizens could hold debates. In 1933, with a grant from the Carnegie Corporation and support from the American Association for Adult Education, he started a five-year experiment in civic education.


The meetings began at a quarter to eight, with a fifteen-minute news update, followed by a forty-five-minute lecture, and thirty minutes of debate. The idea was that “the people of the community of every political affiliation, creed, and economic view have an opportunity to participate freely.” When Senator Guy Gillette, a Democrat from Iowa, talked about “Why I Support the New Deal,” Senator Lester Dickinson, a Republican from Iowa, talked about “Why I Oppose the New Deal.” Speakers defended Fascism. They attacked capitalism. They attacked Fascism. They defended capitalism. Within the first nine months of the program, thirteen thousand of Des Moines’s seventy-six thousand adults had attended a forum. The program got so popular that in 1934 F.D.R. appointed Studebaker the U.S. Commissioner of Education and, with the eventual help of Eleanor Roosevelt, the program became a part of the New Deal, and received federal funding. The federal forum program started out in ten test sites—from Orange County, California, to Sedgwick County, Kansas, and Pulaski County, Arkansas. It came to include almost five hundred forums in forty-three states and involved two and a half million Americans. Even people who had steadfastly predicted the demise of democracy participated. “It seems to me the only method by which we are going to achieve democracy in the United States,” Du Bois wrote, in 1937.


The federal government paid for it, but everything else fell under local control, and ordinary people made it work, by showing up and participating. Usually, school districts found the speakers and decided on the topics after collecting ballots from the community. In some parts of the country, even in rural areas, meetings were held four and five times a week. They started in schools and spread to Y.M.C.A.s and Y.W.C.A.s, labor halls, libraries, settlement houses, and businesses, during lunch hours. Many of the meetings were broadcast by radio. People who went to those meetings debated all sorts of things:


Should the Power of the Supreme Court Be Altered?
Do Company Unions Help Labor?
Do Machines Oust Men?
Must the West Get Out of the East?
Can We Conquer Poverty?
Should Capital Punishment Be Abolished?
Is Propaganda a Menace?
Do We Need a New Constitution?
Should Women Work?
Is America a Good Neighbor?
Can It Happen Here?


These efforts don’t always work. Still, trying them is better than talking about the weather, and waiting for someone to hand you an umbrella.

When a terrible hurricane hit New England in 1938, Dr. Lorine Pruette, a Tennessee-born psychologist who had written an essay called “Why Women Fail,” and who had urged F.D.R. to name only women to his Cabinet, found herself marooned at a farm in New Hampshire with a young neighbor, sixteen-year-old Alice Hooper, a high-school sophomore. Waiting out the storm, they had nothing to do except listen to the news, which, needless to say, concerned the future of democracy. Alice asked Pruette a question: “What is it everyone on the radio is talking about—what is this democracy—what does it mean?” Somehow, in the end, NBC arranged a coast-to-coast broadcast, in which eight prominent thinkers—two ministers, three professors, a former ambassador, a poet, and a journalist—tried to explain to Alice the meaning of democracy. American democracy had found its “Yes, Virginia, there is a Santa Claus” moment, except that it was messier, and more interesting, because those eight people didn’t agree on the answer. Democracy, Alice, is the darnedest thing.


That broadcast was made possible by the workers who brought electricity to rural New Hampshire; the legislators who signed the 1934 federal Communications Act, mandating public-interest broadcasting; the executives at NBC who decided that it was important to run this program; the two ministers, the three professors, the former ambassador, the poet, and the journalist who gave their time, for free, to a public forum, and agreed to disagree without acting like asses; and a whole lot of Americans who took the time to listen, carefully, even though they had plenty of other things to do. Getting out of our current jam will likely require something different, but not entirely different. And it will be worth doing.


A decade-long debate about the future of democracy came to a close at the end of the nineteen-thirties—but not because it had been settled. In 1939, the World’s Fair opened in Queens, with a main exhibit featuring the saga of democracy and a chipper motto: “The World of Tomorrow.” The fairgrounds included a Court of Peace, with pavilions for every nation. By the time the fair opened, Czechoslovakia had fallen to Germany, though, and its pavilion couldn’t open. Shortly afterward, Edvard Beneš, the exiled President of Czechoslovakia, delivered a series of lectures at the University of Chicago on, yes, the future of democracy, though he spoke less about the future than about the past, and especially about the terrible present, a time of violently unmoored traditions and laws and agreements, a time “of moral and intellectual crisis and chaos.” Soon, more funereal bunting was brought to the World’s Fair, to cover Poland, Belgium, Denmark, France, Luxembourg, and the Netherlands. By the time the World of Tomorrow closed, in 1940, half the European hall lay under a shroud of black.


The federal government stopped funding the forum program in 1941. Americans would take up their debate about the future of democracy, in a different form, only after the defeat of the Axis. For now, there was a war to fight. And there were still essays to publish, if not about the future, then about the present. In 1943, E. B. White got a letter in the mail, from the Writers’ War Board, asking him to write a statement about “The Meaning of Democracy.” He was a little weary of these pieces, but he knew how much they mattered. He wrote back, “Democracy is a request from a War Board, in the middle of a morning in the middle of a war, wanting to know what democracy is.” It meant something once. And, the thing is, it still does. ♦
Posted by arclein at 12:00 AM