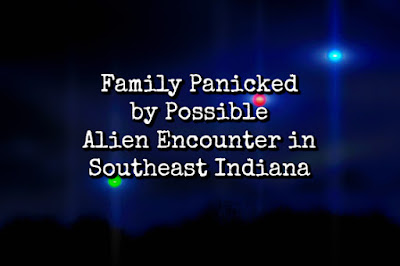 Once again we observe evidence of vision blocking.  Thirty fuzzy coyotes almost sounds like a sooner of pigs but that would also have been easily identified as well.  The offset is tall and thin and the complete lack of identification.
Then we have those lights which can only be technology.  So the alien explanation is good enough for now. What is good is that they did not disturb the situation and the dogs stood off on guard as well.

The vision blocking has prevented us from developing image definition but did not stop us observing evidence of transportation here.


This incident isn’t recent. It actually makes me cry thinking about and I will probably cry while writing it. Anyway I’m 19 now but this experience took place when I was 12. The night this encounter happened everything was pretty normal. I was going back to school the next morning after summer break so I had to be in bed earlier than I would have liked. I remember falling asleep to the movie 'Meet the Robinsons' playing at probably around 10:30 PM. And then I woke up and I knew it had to be late, but the first thing I registered was the TV and it was completely scrambled. The image I mean, almost like a DVD that doesn’t want to play so it skips. But it was frozen so the image was warped and boxy. Except the 'Meet the Robinsons' movie DVD wasn’t damaged. At this point I guessed it was around 2:00 or 3:00 AM.


The second thing I registered were the voices coming from the kitchen. I got out of bed to see what was going on because the voices were talking pretty loud and they sounded kind of panicked. When I got to the kitchen I realized that it was my mom and older sister, who was 18 at the time, and they were arguing. The first thing I actually picked up and comprehended in the conversation was my mom saying “those are definitely aliens. What the f--k else could they be?” She was almost hysterical. Neither of them saw me enter the kitchen but I asked what was going on and my mom looked at me and I knew that she was scared and shaken. She literally had tears in her eyes. She told me in an almost sad voice that there were aliens outside.


At this point we were all standing in the kitchen in front of our sliding glass door that looked out to our yard and the field across the road. I was confused so she pulled back the curtain to the kitchen door and I didn’t see anything initially because I didn’t look hard enough. But I saw my German Shepherd / Great Dane mix sitting in the middle of the yard, in the direction of the neighbors, which was to the right side. I asked my mom why he wasn’t on the porch like normal and why he was sitting so still. To that she slid open the door very slowly, to not make much noise I assume. And usually when the door to the house opens my dog will look towards the sound of it if he is around the yard, which he was, but he didn’t even look at us, his gaze remained undeterred. I didn’t realize what was going on but I was scared because my mom was clearly scared as was my older sister. My mom signalled my sister and I to be quiet. And we were.


You could, on a normal night, hear the animals in the woods or the trees in the wind and crickets chirping because it was summer, but that night we couldn’t hear anything. It was completely silent outside, not even a breeze. This gave me chills that made me shake. Something was terribly off. My mom shut the door. And my sister and I followed her to her bedroom, where my dad was asleep and the window was open. There she explained to me what was going on. She told me that my sister was in my room looking for something and peaked out the window. My room is in the back of the house and my window looks out to the trees behind the house. She saw what she thought was a pack of coyotes but there were about 30 of them and the closer she looked she started to see distinguishable features and that’s when she dipped out of my room and went and told my mom. My mom told me that they walked outside, before my sister came to her about what she saw, and saw a tall dark and slender figure walking down the neighbor's driveway towards our house. She thought it was the neighbor coming over for some reason. But then she got scared suddenly and felt like it would be best to pretend to be asleep so she wouldn’t have to talk to the “neighbor”. And those events lead us to go to the kitchen window that overlooked the two neighboring houses right next to each other. It was dark. But we were looking very hard. And we could start to make out shadowy figures. Most of them were small and moved super fast. So fast that if you weren’t paying attention you wouldn’t have noticed. And if you paid even more attention, you could see the slower taller ones. They moved slow and their silhouettes were darker than their background but they were almost fluid looking. It just did not look real at all. And this sucks but we didn’t even think about grabbing a camera and trying to catch pictures. Which I regret just thinking back.


Another thing I noticed and is worth mentioning I think, was that behind the neighbor's house they had woods too. Well, within the trees and very low to the ground, there were three evenly spaced lights. One was green, the other red, and another blue I think. The lights were pretty dim but they were never there before. We watched out the window for about ten minutes freaking out. My mom was almost wheezing at this point, she was so shocked. After that she took us into her room and opened the window more, which I didn’t like, it made me nervous. She told us to be quiet. And since we couldn’t hear anything at all coming from outside we sat in silence. Until we heard what sounded like a car passing on the road. there was engine sound but we could see the road from my mom's window and there were no cars, no headlights, nothing. But the engine buzz was loud and turned into sounding like a plane was passing over the house, that’s how loud it got. This lasted about a minute or so then it went completely silent again. After a few minutes, it would repeat the engine sound.


After all of these happened, my mom shut the window and closed the curtains. And we sat in her room, all of us basically shaking. Anyway another thing to point out was, I did eventually work up the courage to go back to my room. But that was a few hours later and was starting to get light out. The TV was still scrambled so I tried to eject the disc and it wasn’t working. So I ended up having to unplug the DVD player to get the scramble off the TV. That’s about all that happened that night. But it freaked me out terribly. I don’t mention it to anyone except the people I trust with my life. And even then they sometimes don’t get to hear the full story. But I want to know your thoughts on this. Is there any rational explanation for things I saw? The year was probably 2013. I don’t remember the day. It might have been a Sunday evening into Monday morning? It was at the house that I still live in currently, in southeast Indiana. Probably August since I was starting school. So summer. Which would definitely make the year 2013 now that I’m thinking about it.” LJ
Posted by arclein at 12:00 AM