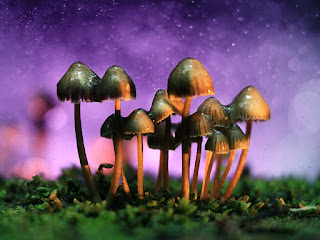 Michael Pollen weighs in with an odd book that tracks several emergent communities of engagement with the development of scientific mind therapy using magic mushrooms and also LSD in particular.  for now he avoids ayahuasca and its DMT component and also ecstasy.  Critically he finally experiments with the drugs themselves while properly guided.

If there is a take home, it is that the administration of all these drugs needs to be done in concert with an experienced coach.  Bad trips are not recommended and this deals with that.

Otherwise, recreational use is just that.  Why?  What does work is micro-dosing generally with all of these drugs as there can be real benefits to tap.  In fact I suspect that micro dosing is recommended for everyone along with training in meditation and prayer which is first the repetition of a sacred mantra.  If we can do either, then we also need to work in occasional micro - dosing.

When Michael Pollan tripped on magic mushrooms for the first time, he saw himself spread out across an expansive outdoor landscape like paint.

It was the best-selling author's second stop on a three-part tour of psychedelic drugs, which Pollan describes in vivid detail in the book "How to Change Your Mind: What the New Science of Psychedelics Teaches Us About Consciousness, Dying, Addiction, Depression, and Transcendence."
He writes in the book that under the consecutive influences of acid, magic mushrooms, and a form of DMT from the venom of a toad, he felt his sense of self dissolve like butter, blow away like a sheaf of Post-it notes in the wind, and then explode.

Pollan is best known for writing about food and farming; he's the author of the best-seller "The Omnivore's Dilemma." But he embarked on this recent journey to learn why hallucinogens appear uniquely suited to provide relief to people with psychiatric diseases such as depression and anxiety.

For Pollan, the topic is familiar but long-ignored terrain: In the 1990s, he wrote several works about drugs and drug culture, including a 1997 essay in Harper's called "Opium Made Easy."

His new book comes on the heels of a recent resurgence of interest in psychedelics' therapeutic potential. The drugs appear to fundamentally reorganize the brain, freeing up space where none previously existed and redirecting congested thoughts to more open highways of consciousness. By doing so, the drugs can curb feelings of dread and panic.

Researchers are studying 'shrooms (whose active ingredient is psilocybin), LSD (commonly known as acid), ecstasy or MDMA, ayahuasca, DMT, and even the pseudo-psychedelic drug ketamine. The results are promising.

Last year, scientists studying psilocybin likened its quick effects on cancer patients with anxiety and depression to a "surgical intervention" for the mental illness. This month, researchers concluded that adding MDMA to a standard talk therapy regimen appears to help reduce symptoms of PTSD and accelerate the therapeutic process. And last spring, scientists found evidence that ayahuasca affects the brain in ways that are similar to meditation.

At the core of many participants' experiences on these drugs is what many describe as a dissolving of the ego or sense of self. Neuroscientists understand this phenomenon in a physical sense, while others describe it in more spiritual terms.

Pollan encountered that sensation on all three drugs he tried — sometimes gently, other times violently.

"Who was this 'I' that was able to take in the scene of its own dissolution?" Pollan writes. "Good question. It wasn't me, exactly."

To read about the answer to that question, "How to Change Your Mind" is out today in hardcover.