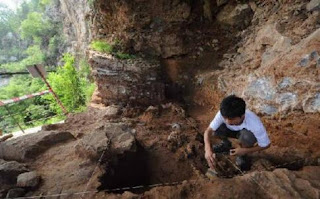 This is very encouraging. I am certain that many separated populations arose during the Ice Age and developed most of the distinct features associated with those regions. It just makes good sense. On the other hand, a new influx of genes, particularly if they are highly adaptive, would soon integrate into the indigenous populations.

We have always tried to explain this process as one of violence in which the losers die when it is nothing of the kind. The losers may well die, but the breeding women are inevitably conserved. Thus a successful adaptation inevitably finds its way everywhere.

During the past ten thousand years we have had the particular emergence of agricultural man in several separate locations around the world. Mere population expansion has subsumed all other local generic material but has not expunged any of it. Such loss is actually a rarity.

In time we will have enough data to begin the interesting task of unraveling treads of inheritance even back to origination point.

The discovery of ancient human bones in Tianyuan Cave, in Zhoukoudian, Beijing, 10 years ago caused a sensation. They showed Tianyuan Man died about 40,000 years ago.

It was the first time that early human remains had been found in the area since the discovery of Peking Man in 1920s. But Peking Man's skull and other specimens were lost in the chaos of the Japanese invasion during the second world war.

The remains of Tianyuan Man consisted of more than 30 fragments, including lower jaw and leg bones, but no skull - not enough to tell how closely the ancient human related to present-day Chinese. Some palaeoanthropologists were not even sure the bones belonged to a male.

Tianyuan Man reclined quietly in the fossil room of the Institute of Vertebrate Palaeontology and Palaeoanthropology in Beijing. He was almost forgotten until a team of Chinese and German researchers reopened the dusty box and scrutinised the bones with the newest tools of DNA analysis.

What they found was important: Tianyuan Man's DNA came from people who were ancestors not only of many present-day Asians but also Native Americans. It also suggested that people in China at the time were already different from Europeans. The results were published last month in theProceedings of the National Academy of Sciences in the United States.

But the biggest surprise in the study by the Chinese Academy of Sciences and the Max Planck Society was not the results, but the method used to achieve them.

It was the first time scientists had found an effective method to retrieve and analyse ancient human DNA from remains outside permanent frost zones.

Detective work on ancient DNA has become a science fiction cliché, with DNA preserved in amber being used to resurrect dinosaurs in the Hollywood blockbuster Jurassic Park. In real life, however, it has never been so easy, and palaeoanthropologists had only been able to recover the DNA of Neanderthals in Germany and Denisovans in Russia, extinct homo species who lived in arctic-like cold.
For the team studying the Tianyuan remains, contamination posed the first challenge.

Institute deputy director Gao Xing said that when palaeoanthropologists found the bones a decade ago they had not considered the possibility of DNA analysis and took no precautions against contamination. Researchers passed the bones from hand to hand for examination and at the press conference announcing the find, the bones were laid out on a table for viewing and photos. Many people were so close that their breath could have carried their DNA to the bones.

Max Planck Society researcher Fu Qiaomei , the first author of the paper, said she had flown one of the bones to Germany and prepared the samples with laborious procedures in the finest laboratory for ancient DNA analysis. They were delighted to find the DNA had not been contaminated by modern people.

But the scientists immediately encountered another problem. The DNA of Tianyuan Man accounted for less than 0.03 per cent of the total DNA extracted from the sample; the rest was mostly the DNA of germs. No commercially available equipment could analyse such a tiny amount of material.

A new method had to be developed to overcome the shortage of material, which had doomed many previous attempts to decode ancient DNA.

Fu said the traditional approach in DNA analysis was like casting a net in a lake - useful when fish were abundant but ineffective when there were only a few small fish in the water. "We came up with a method similar to pole fishing," she said. "With the right bait we could fish out the ancient DNA to fill up a more or less complete genome template."

The method worked, and the results solved some suspenseful scientific puzzles about Tianyuan man.

Although some Chinese researchers had theorised that he was an ancestor of present-day Chinese, the scarcity of bones made it a wild guess at best. But the DNA results confirmed it, showing that Tianyuan Man was not only an ancestor of Han Chinese but also of many people in Asia, including Thais and Koreans. He was also quite similar to Native Americans.

Scientists have more or less agreed that the first ancestor of humans originated in Africa millions of years ago, but they still have heated debates on the origins of modern humans.

Some scientists proposed in the 1980s that all present-day humans could be traced back to an African Eve who left the continent more than 220,000 years ago.

In recent years, however, the African Eve theory, which relied heavily on the evolution of the mitochondrial genome, has come under fire.

Some palaeoanthropologists in China, for instance, said fossil evidence showed that present-day Chinese evolved from a population that had survived bitter ice ages and resisted the invasion of new migrants from Africa.

The new technology used to study Tianyuan Man will enable scientists to study the DNA of much more ancient humans and cast more light on the ongoing debate. Gao said they hoped to establish a long, continuous record of human evolution from numerous bones unearthed in China, dating from a few hundred years ago to hundreds of thousands of years ago.

"We have many challenges in palaeoanthropology today," Gao said. "We have difficulty establishing a meaningful link between two prehistoric sites. We are running short on specimens. We are puzzled by the culture of early humans. But the future looks bright."