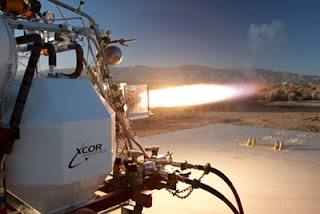 This appears to be proceeding well. One of the wonders of modern design technology is that so much can be simulated in the computer before cutting metal. Thus we have astonishing swift product development, or at least appear to. I am sure those who are hands on do not think so.
We are now headed for sustained firing. We are getting there. And will be flying this engine soon.


September 02, 2009, Mojave, CA: XCOR Aerospace announced today that it has reached several significant milestones in the 5K18 rocket engine test program. This is the engine that powers XCOR's Lynx suborbital spacecraft. The engine can be seen running in several newly released videos including a video demonstrating the very stable "shock diamond" pattern visible in the engine's supersonic exhaust.
"Like all of our rocket engines, this engine has demonstrated the ability to be stopped and re-started using our safe and reliable spark torch ignition system", said XCOR CEO Jeff Greason. "The basic cooling design has also been completed and the engine is able to run continuously at thermal equilibrium.

With those milestones reached, the 5K18 test program is now moving forward into a second phase of tuning and optimization, in which we will also greatly increase our cumulative run time."

Data and test results from the Lynx engine program are being used by XCOR and certain customers to develop a deeper understanding of operationally responsive spacelift procedures. These procedures can then be applied to future rocket powered vehicles. XCOR and its customers now have important information that will aid in the development of the unique requirements of operationally responsive high performance manned and unmanned rocket systems.
Testing of the 5K18 rocket engine is continuing in parallel with several other key Lynx system components, including wind tunnel testing at AFRL facilities and development of the Lynx pressure cabin at XCOR's main facilities in Mojave, CA.
"These additional firings and milestones continue to demonstrate XCOR's ability to deliver safe and truly innovative rocket propulsion technology that will one day revolutionize space access by enhancing readiness levels for flight from years to days or even hours, and driving down costs and increasing safety by orders of magnitude", said XCOR Chief Operating Officer, Andrew Nelson.XCOR Aerospace is a California corporation located in Mojave, California. The company is in the business of developing and producing safe, reliable and reusable rocket powered vehicles, propulsion systems, advanced non-flammable composites and other enabling technologies for responsive private space flight, scientific missions, upper atmospheric research, and small satellite launch to low earth orbit. Its web address is:
www.xcor.com. Advanced ticket sales have already commenced at www.rocketshiptours.com
Posted by arclein at 10:43 PM