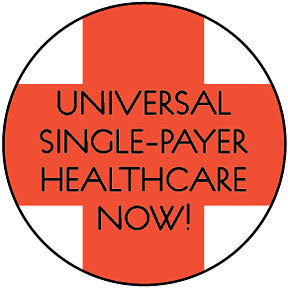 It is remarkable that just about every country on Earth can figure out that the single payer system of supplying health care actually is the most practical delivery system. It even got written into their bloody constitution in Iraq.
Core service delivery is easy to define and support. And if you need more, you go pay for it. Is that not reasonable?

What gets covered quite naturally is emergency intervention and life saving actions. Less immediate needs tend to go begging a bit. But to be fair the line must be put somewhere and there will always be folks inconvenienced.
As noted in the Huffington Post, a health care system was imposed in Iraq quite along the lines of the Canadian system, aided and abetted by American politicians. At the same time a full one third of Americans simply do without.

The insurance industry and finance industry have gamed their industries and want no reform. Thus they spread the loot around to prevent movement.

All that has to happen is a state or two to unilaterally establish a new single user system and the music will stop. Perhaps North Dakota should join Canada’s system!! It was Saskatchewan going alone that brought in the Canadian system. Everyone thought they would go bust.


Guaranteed Health Care In Iraq - But Not For You

Article 31 of the Iraqi Constitution, drafted by your right-wing Bushies in 2005 and ratified by the Iraqi people, includes state-guaranteed (single payer) healthcare for life for every Iraqi citizen.

"First: Every citizen has the right to health care. The State shall maintain public health and provide the means of prevention and treatment by building different types of hospitals and health institutions.

Second: Individuals and entities have the right to build hospitals, clinics,or private health care centers under the supervision of the State, and this shall be regulated by law."

There are other health care guarantees, including special provisions for children, the elderly, and the handicapped elsewhere in the 43-page document.

Under force of arms, President Bush imposed his particular idea of democracy on a people not asking for it - perhaps a noble undertaking in one context and a criminal violation of international law in another.

Bush's followers are proud of the Iraqi Constitution, a model for the world, they told us.

So, according to the American political right-wing, government-guaranteed health care is good for Iraqis, but not good for us. Not good for you. They decry even a limited public option for you, but gleefully imposed upon the Iraqis what they label here as "socialism," with much Democratic Party member support.

Indeed, reading the Iraqi Constitution so near to the 8th anniversary of September 11, 2001 is instructive. It is the very definition of American right-wing hypocrisy.

We have (thus far) sacrificed more blood to wrest Iraq from tyranny than we lost on 9/11. In addition, according to the Congressional Research Service, as of May 15, 2009 (
Report 7-5700/RL33110) we have spent and/or authorized $864 Billion in military operations on Operation Enduring Freedom, which includes Iraq and Afghanistan. The overwhelming majority of those funds have been for the war in Iraq. Additional secret funding has been authorized for intelligence and special operations.

The total is more than (or, in the worst case, equal to) the funding required to guarantee minimally decent health care here.

In other words, the most senior members of the Republican establishment - and some Democrats like Max Baucus (D-MT) - have gladly spent more taxpayer funds to ensure health care as a Constitutional right in Iraq than they are willing to spend to give you any level of guaranteed coverage.

The source document I used is from the official United Nations Assistance Mission for Iraq. If you'd like to download and review the full Iraqi Constitution, click
HERE

This news is an example of the benefit of our online viral information age. The situation was first called to my attention late yesterday (September 8) by a long-term blogger, Korkie Moore-Bruno, on a think tank list of Obama supporters. Korkie posted an alert from her Facebook friend Jubal Harshaw. Give them credit for the heads-up; all I've done was verify the rumor with the United Nations.

It would seem that U. S. citizens might find out if their Representative and/or Senators have supported or voted to fund the war in Iraq. If so, do they support health care as a civil right for you?

If the answers to those questions are "yes" and "no," respectively, you might consider less hypocritical representation.
Posted by arclein at 1:03 AM

The main cause of global warming:
1.many more animal farms in the world
2.indiscriminate felling of trees
3.pollution in developing countries

how to prevent:
1.Be vegetarian
2.use environmentally friendly technology

the latest info about global warming .