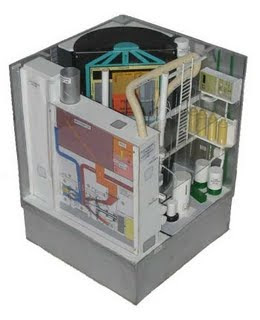 We are getting further down the road to having several mass produced nuclear reactors much smaller than the large plants built decades ago. This is also good news as we are on the verge of a massive grid build out that will be needed to support the coming automotive power market.
Having many reactors situated in zones of high demand is becoming necessary and is no longer a market for natural gas. Also small reactors are far less intrusive and may even be better integrated.
The industry has obviously shaken itself of the mega project mindset and has seen its future in having many small facilities.
I will make one other observation. These devices should be built around a thermal supply market. That is not out in the country. In a city center, production of hot water can be fed directly into surrounding infrastructure. In effect the hot water is free and the city itself provides the needed heat sink.
This is a certain improvement over a thermal plant using natural gas as is done in Vancouver city center. There a small nuclear plant would nicely provide city center power and city center heat for the large buildings. All the necessary infrastructure is already built to handle plug and play.
Again, mass production will also drive cost down and soon cities with ambition and insufficient size will be also building.

There is some conflicting information in the 32 page presentation and a Sandia press release. The presentation (May, 2009) talks about a variety of reactor technologies include light water, gas cooled, liquid metal cooled (breeders), and molten salt. The Sandia press release talks only about a breeder reactor with a design that is 85% completed. There are no specifics about the 85% completed design other than it is proliferation resistant and has integrated safety.The presentation talks about a goal of $1500/KW for construction and the press release a financial target of 5 cents per kwh. Those are price levels that already being achieved in China. China is already making progress to factory built modular nuclear reactor (230 modules for Toshiba/Westinghosue AP1000) and factory mass produced pebble bed reactors [Pebble bed would be right sized 200 MWe]. China's PM-HTR breaks ground Sept 2009 and China is expecting to follow up with dozens of reactors as the technology and design are proven.Russia is also looking to produce a "right sized" factory mass produced breeder reactor.

The guidelines for developing large-scale nuclear power in Russia were set out as follows early in the decade: - Power costs not more than 3 cents/kWh, - Capital costs under US$ 1000/kW, - Service life at least 50 years, - Utilisation rate at least 90%. The technology future for Russia was focused on four elements:- Serial construction of AES-2006 units, - Fast breeder BN-800, - Small and medium reactors - KLT-40 and VBER-300 (100-300 MWe), - HTGR. (High Temperature Gas Reactor)

The new reactors in China and Russia would enable the low cost manufacturing of nuclear reactors to be exported.There are several companies and nations proposing factory built modular nuclear reactorsConsistent aspects of Sandia's plan:* Use super critical CO2 (SC-CO2) to make a smaller turbine to convert heat to electricity* Factory Mass produced reactors in the 100-300 MWe range* Costs in the $1500/KW and 5 cents per kwh* Proliferation resistant and exportable* This is where the global energy market is headed* This will displace the natural gas reactors of the same size and costTom led a team at Sandia which has completed 85% of the reactor core design.

A smaller scale, economically efficient nuclear reactor that could be mass-assembled in factories and supply power for a medium-size city or military base has been designed by Sandia National Laboratories. The exportable, proliferation-resistant “right-sized reactor” was conceived by a Sandia research team led by Tom Sanders. Sanders has been collaborating with numerous Sandians on advancing the small reactor concept to an integrated design that incorporates intrinsic safeguards, security and safety. This opens the way for possible exportation of the reactor to developing countries that do not have the infrastructure to support large power sources. The smaller reactor design decreases the potential need for countries to develop an advanced nuclear regulatory framework. Incorporated into the design, said team member Gary Rochau, is what is referred to as “nuke-star,” an integrated monitoring system that provides the exporters of such technologies a means of assuring the safe, secure, and legitimate use of nuclear technology. “This small reactor would produce somewhere in the range of 100 to 300 megawatts of thermal power and could supply energy to remote areas and developing countries at lower costs and with a manufacturing turnaround period of two years as opposed to seven for its larger relatives,” Sanders said. “It could also be a more practical means to implement nuclear base load capacity comparable to natural gas-fired generating stations and with more manageable financial demands than a conventional power plant.” About the size of half a fairly large office building, a right-sized reactor facility will be considerably smaller than conventional nuclear power plants in the U.S. that typically produce 3,000 megawatts of power. With approximately 85 percent of the design efforts completed for the reactor core, Sanders and his team are seeking an industry partner through a cooperative research and development agreement (CRADA). The CRADA team will be able to complete the reactor design and enhance the plant side, which is responsible for turning the steam into electricity. Team member Steve Wright is doing research using internal Sandia Laboratory Directed Research and Development (LDRD) program funding.These smaller reactors would be factory built and mass-assembled, with potential production of 50 a year. They all would have the exact same design, allowing for quick licensing and deployment. Mass production will keep the costs down, possibly to as low as $250 million per unit.Because the right-sized reactors are breeder reactors — meaning they generate their own fuel as they operate — they are designed to have an extended operational life and only need to be refueled once every couple of decades, which helps alleviate proliferation concerns. The reactor core is replaced as a unit and “in effect is a cartridge core for which any intrusion attempt is easily monitored and detected,” Sanders said. The reactor system has no need for fuel handling. Conventional nuclear power plants in the U.S. have their reactors refueled once every 18 months. The goal of the right-sized reactors is to produce electricity at less than five cents per kilowatt hour, making them economically comparable to gas turbine systems.