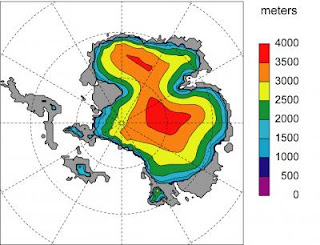 Of course the hidden assumption is that dropping CO2 led to a growth of the South Polar Ice Cap. What if dropping temperatures caused a sharp drop in atmospheric CO2 instead? Which is most realistic?

Right now a whole range of questions are wide open. Was there a Northern Cap or did we in fact have to wait for the creation of the blockage at Panama around a million years ago? If not, why not?

Polar glaciation forming an Ice cap is dependent on the presence of a continental land mass within fifteen degrees of the pole. It will force the ice further away but that is the minimum need. Antarctica today is perfectly positioned to produce a maximal ice cap. It is also ringed by open ocean sealing it off from much external weather. It is optimized to be our climate refrigerator and is also well balanced so as not to place stress on the crust.

In fact we know from the polar ice record that a warming climate leads production of CO2. Thus what evidence is now available suggests that our present assumptions are exactly backward.

An obvious conjecture is that a simple lack of polar lands led to tropical conditions on a global basis. I am sure that every winter, the oceans froze over and that a good yard or so of sea ice was produced. Yet with the spring, this all broke up and was quickly dispersed and the full blast of twenty four hour sunlight reasserted itself.

This sort of assertive material finds its way into text books and whole generations grow up believing this as correct. Except both interpretations have merit, yet the latter one today has the weight of present evidence however scant.

The link between declining CO2 levels in the earth's atmosphere and the formation of the Antarctic ice caps some 34 million years ago has been confirmed for the first time in a major research study.
A team of scientists from Cardiff, Bristol and Texas A and M universities braved the lions and hyenas of a small East African village to extract microfossils in samples of rocks which show the level of CO2 in the Earth's atmosphere at the time of the formation of the ice-cap.
Geologists have long speculated that the formation of the Antarctic ice-cap was caused by a gradually diminishing natural greenhouse effect.
The study's findings, published in Nature online, confirm that atmospheric CO2 declined during the Eocene - Oligocene climate transition and that the Antarctic ice sheet began to form when CO2 in the atmosphere reached a tipping point of around 760 parts per million (by volume).
Professor Paul Pearson from Cardiff University's School of Earth and Ocean Sciences, who led the mission to the remote East Africa village of Stakishari said: "About 34 million years ago the Earth experienced a mysterious cooling trend. Glaciers and small ice sheets developed in Antarctica, sea levels fell and temperate forests began to displace tropical-type vegetation in many areas.
"The period, known to geologists as the Eocene - Oligocene transition, culminated in the rapid development of a continental-scale ice sheet on Antarctica, which has been there ever since.
"We therefore set out to establish whether there was a substantial decline in atmospheric carbon dioxide levels as the Antarctic ice sheet began to grow."
The team mapped large expanses of bush and wilderness and pieced together the underlying local rock formations using occasional outcrops of rocks and stream beds.
Eventually they discovered sediments of the right age near a traditional African village called Stakishari. By assembling a drilling rig and extracting hundreds of meters of samples from under the ground they were able to obtain exactly the piece of Earth's history they had been searching for.
Co-author Dr Gavin Foster from the University of Bristol Earth Sciences Department said: "By using the rather unique set of samples from Tanzania and a new analytical technique that I developed, we have, for the first time, been able to reconstruct the concentration of CO2 across the Eocene-Oligocene boundary - the time period about 34 million years ago when ice sheets first started to grow on Eastern Antarctica. "
The new findings offer important lessons for the future and will add to the debate around rising CO2 levels in the earth's atmosphere as the world's attention turns to on UN Climate Conference, which opens in Copenhagen later this year.
Co-author Dr Bridget Wade from Texas A and M University Department of Geology and Geophysics added: "This was the biggest climate switch since the extinction of the dinosaurs 65 million years ago.
"Our study is the first to provide a direct link between the establishment of an ice sheet on Antarctica and atmospheric carbon dioxide levels and therefore confirms the relationship between carbon dioxide levels in the atmosphere and global climate."
Posted by arclein at 12:48 AM