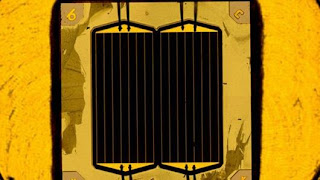 As mentioned this is a sprint race in the labs to pass the fifty percent mark. Forty three percent is pretty well down the road.
What no one bothers to mention is that commercial product is still running a marathon. The best is shipping with conversion levels closer to fifteen. See last story.
In fact, we cannot be too optimistic that this will improve soon. After all, we have been trying for years to make it better. We have unending lab improvements but a very slow transmission into deliverable hardware.
I would like to see more focus on structured quantum waveguides to see if that can change things.
The good news is that once you set aside the effort to maximize yield and turn to lowering costs, we are getting progress. Nanosolar likely achieves yields of around 10 to 13% but using print methods is bringing costs down to under $1.00 per watt. So we need 400 square miles of desert instead of 100 square miles of desert. No one will care because the cost is right and any improvement is easily implemented on a plug and play protocol.
The real sprint race is in the real world as the race is on to supply solar power at $1.00 per watt to everyone.
We are entering a new energy world in which we have a huge national grid, solar roofing and siding perhaps, geothermal and ample wind power and were needed and small nuclear were necessary to supply a central heat supply.
There are three separate stories appended.

Australians Break Solar Power Record
August 25, 2009
http://blogs.discovery.com/news_sustainable/2009/08/solar_power_record.html
In a record reminiscent of a 100-meter dash, scientists at the University of South Wales in Sydney, Australia, have created the world's most efficient solar power cell ever...by a hair.
Professor Martin Green and his colleague Anita Ho-Baillie led a team of U.S. researchers to victory with a multi-cell combination that is able to convert 43 percent of sunlight into electricity. The previous record was 42.7 percent.
To capture light at the red and infrared end of the spectrum, the researchers threw everything into the cells--gallium, phosphorous, indium, and arsenic, plus silicon. While a bunch of the semiconductors used are expensive, the scientists did raise the efficiency bar.
Ho-Baillie and Green broke a different solar record with a silicon solar cell last October. If they continue to combine their efficient cells with technology from the folks at the National Renewable Energy Lab and Emcore, maybe they'll make ones that can convert 50 percent. I can't wait for the sunny day when that happens.
New solar cell efficiency record set
By Noel McKeegan
22:36 January 26, 2009 PST