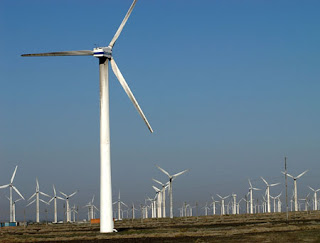 Why is it necessary to visit china to see common sense at work? Yes children, give the wind industry a price guarantee for ten years and the USA will do exactly what China is setting out to accomplish.

These are simple solutions to a monster problem and the US manufacturing industrial complex is eager to build it all out.

Except today we seem bereft of either technical leadership or for that matter convincing financial leadership.

The USA needs two things fixed now. One is the mortgage industry and you can Google my many posts on that subject. Those posts have recently attracted interest from an interested audience. What I like about blogging, is that you can write an article and then throw it up on the wall and let time and Google connect the correct dots.

The second is employment and the developing energy transition. When I started blogging it was the last thing from anyone’s thoughts. Today it is front and center. The solution is a government guarantee for wind and geothermal energy price for a decade. Cut them loose and we have everyone cutting metal and hanging power lines.

Why is it so easy for China and South Korea to see the obvious? They certainly do not read my posts on the subject. Most likely it is because their leadership is possibly drawn from the technocrats rather than the legalists who are technically clueless.

Today I am still waiting for the President of the USA to do anything on these problems except wish them away. That he has focused on health care certainly conforms to his past and his inclinations. That he will be unable to keep congress from turning it into a train wreck is a given.

http://www.winddaily.com/reports/Wind_could_meet_Chinas_electricity_needs_by_2030_study_999.html
China could meet all of its future electricity needs with wind power if the government continues to subsidize the development of wind farms with price guarantees, a study published Thursday has found.
Already the world's largest emitter of carbon dioxide, China's electricity needs are expected to double in the next two decades and it is currently adding several new coal-fired power plants to its grid every week.
"The real question for the globe is: What alternatives does China have?" said lead author Michael McElroy of Harvard's School of Engineering and Applied sciences.
McElroy's team used meteorological and geographical data to calculate China's total wind capacity and then estimated how much power could be delivered profitably at different floor prices.
They found that wind energy providers could profitably supply all of China's projected electricity demand by 2030 if they receive at least 0.516 yuan (7.6 US cents) per kilowatt hour for the first 10 years.
That's in line with the price guarantees China has awarded in recent concessions to wind farm operators which ranged from 0.382 to 0.551 yuan per kilowatt hour.
"This suggests that it would be possible to eliminate much if not all of the carbon dioxide expected to be emitted by the power sector over the foreseeable future," the study published in the journal Science concluded.
A contract price as low as 0.4 yuan per year would be sufficient to displace 23 percent of energy generated by coal, the study found.
"This would require a major investment of resources and could be accomplished only on the basis of a carefully designed long-range plan for the Chinese power sector," the authors wrote.
"Benefits in terms of improvements in Chinese air quality would be substantial, however, and there could be important benefits also for the Chinese economy."
By contrast, meeting future needs with coal could increase carbon emissions by 3.5 gigatons a year from the current annual level of 6.6 gigatons.
Health problems caused by air pollution are currently estimated to cost 0.7 to 4.3 percent of China's GDP, the authors note.
And while the authors estimate it would cost about six trillion yuan (900 billion dollars) to introduce 640 gigawatts of wind power over the next 20 years, they note that is just a fraction of China's current annual GDP of about 26 trillion yuan and major investments in generating capacity must be made regardless.
China's future energy needs could also be met without radically altering its landscape or displacing farmers, the authors found.
A network of wind turbines operating at as little as 20 percent of their capacity would be able to produce as much as 24.7 petawatt hours of electricity annually, which is seven times the country's current consumption.
"Wind farms would only need to take up land areas of 0.5 million square kilometers, or regions about three quarters of the size of Texas," said co-author Xi Lu, a graduate student in McElroy's group at Harvard.
"The physical footprints of wind turbines would be even smaller, allowing the areas to remain agricultural."
Wind energy currently accounts for 0.4 percent of China's total electricity supply, but China is the world's fastest growing market for wind power and ranks number four in the world for installed capacity.
Current government policy calls for capacity to grow from the current level of 12.2 gigawatts to 100 gigawatts by 2020.
Posted by arclein at 12:14 AM