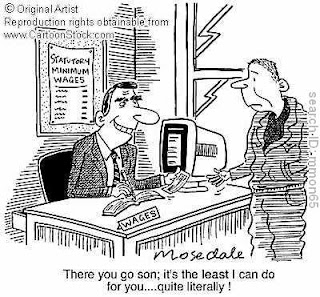 It must have been labor day once again.
The theory that an incrementally raised minimum wage had a direct tradeoff in employment has been peddled from the first implementation and never been tested. That people employed at those wage levels are often abused by employers is also well known and an outcome of the demand for a range of low cost services. The margins are simply too small to prevent such abuse.
What this work shows is that politicians have more room to maneuver than they ever thought.
Real minimum wage needs to be recalculated in terms of family incomes, housing costs and various government transfers to become credible. The actual set price for paid employment hides a grey economy in which participants often work for a lot less but are also not placing demands on their employer.
The purpose of a minimum wage should not be to prevent business making deals with employees, but to halt a race to the bottom that weakens the whole of society. Again the labor market is just that. The minimum wage blocks collapse by naturally taking product off the market in the face of collapse such as experienced the last twelve months.
There are a lot of plausible improvements that can be make to assist in the smooth functioning of the labor market. We need only look at the constraints and rules operating in China today to show that. No one claims it is perfect, but a society in which the unemployed can return to a home village is providing a safety net as good or better than an arbitrary welfare system that is ground by inflation. It also provides a floor to the labor market.
And the employee needs that power over the employer. He needs to know that he can give it all up and return to a home village were his efforts are modestly rewarded in terms of local economic activity. That is what creates a healthy labor market.
Myth and Measurement: The New Economics of the Minimum Wage
David Card & Alan B. Krueger
David Card and Alan B. Krueger have already made national news with their pathbreaking research on the minimum wage. Here they present a powerful new challenge to the conventional view that higher minimum wages reduce jobs for low-wage workers. In a work that has important implications for public policy as well as for the direction of economic research, the authors put standard economic theory to the test, using data from a series of recent episodes, including the 1992 increase in New Jersey's minimum wage, the 1988 rise in California's minimum wage, and the 1990-91 increases in the federal minimum wage. In each case they present a battery of evidence showing that increases in the minimum wage lead to increases in pay, but no loss in jobs.
A distinctive feature of Card and Krueger's research is the use of empirical methods borrowed from the natural sciences, including comparisons between the "treatment" and "control" groups formed when the minimum wage rises for some workers but not for others. In addition, the authors critically reexamine the previous literature on the minimum wage and find that it, too, lacks support for the claim that a higher minimum wage cuts jobs. Finally, the effects of the minimum wage on family earnings, poverty outcomes, and the stock market valuation of low-wage employers are documented. Overall, this book calls into question the standard model of the labor market that has dominated economists' thinking on the minimum wage. In addition, it will shift the terms of the debate on the minimum wage in Washington and in state legislatures throughout the country.

Reviews:
"The Card-Krueger work is essentially correct: the minimum wage at levels observed in the United States has had little or no effect on employment. At the minimum, the book has changed the burden of proof in debates over the minimum, from those who stressed the potential distributional benefits of the minimum to those who stress the potential employment losses."--Richard B. Freeman, Journal of Economic Perspectives
"Card and Krueger didn't just question the conventional wisdom; they attacked it in a novel and powerful way. Instead of concocting a mathematical model and `testing' it with advanced statistical techniques, which is what most economists call research, they decided to test the theory in the real world.
. . . The work of Card and Krueger was worth a hundred theoretical models in The American Economic Review."--John Cassidy, The New Yorker
"David Card and Alan Krueger have written a book that represents a phenomenal amount of careful and honest research and that will be a classic in the minimum wage literature and also in the broader field of empirical labor economics.... A model of how to do good believable research, this book will be influential for a long time."--Paul Osterman, Industrial and Labor Relations Review
"Clearly, this book should be read by any economist who wants to stay abreast of substantive, high level debates within the profession.... The book already has assumed an important position within the field of labor economics, and significant research in years to come is likely to revolve around its principle thesis."--K. A. Couch, Journal of Economics

Low-Wage Workers Are Often Cheated, Study Says
by
STEVEN GREENHOUSE
Published: September 1, 2009
Low-wage workers are routinely denied proper overtime pay and are often paid less than the minimum wage, according to a new
study based on a survey of workers in New York, Los Angeles and Chicago.
Less Than the Minimum
The study, the most comprehensive examination of wage-law violations in a decade, also found that 68 percent of the workers interviewed had experienced at least one pay-related violation in the previous work week.
“We were all surprised by the high prevalence rate,” said
In surveying 4,387 workers in various low-wage industries, including apparel manufacturing, child care and discount retailing, the researchers found that the typical worker had lost $51 the previous week through wage violations, out of average weekly earnings of $339. That translates into a 15 percent loss in pay.
The researchers said one of the most surprising findings was how successful low-wage employers were in pressuring workers not to file for workers’ compensation. Only 8 percent of those who suffered serious injuries on the job filed for compensation to pay for medical care and missed days at work stemming from those injuries.
“The conventional wisdom has been that to the extent there were violations, it was confined to a few rogue employers or to especially disadvantaged workers, like undocumented immigrants,” said
Nik Theodore, an author of the study and a professor of urban planning and policy at the University of Illinois, Chicago. “What our study shows is that this is a widespread phenomenon across the low-wage labor market in the United States.”
According to the study, 39 percent of those surveyed were illegal immigrants, 31 percent legal immigrants and 30 percent native-born Americans.
The study found that 26 percent of the workers had been paid less than the minimum wage the week before being surveyed and that one in seven had worked off the clock the previous week. In addition, 76 percent of those who had worked overtime the week before were not paid their proper overtime, the researchers found.
The new study, “Broken Laws, Unprotected Workers,” was conducted in the first half of 2008, before the brunt of the recession hit. The median wage of the workers surveyed was $8.02 an hour — supervisors were not surveyed — with more than three-quarters of those interviewed earning less than $10 an hour. When the survey was conducted, the minimum wage was $7.15 in New York State, $7.50 in Illinois and $8 in California.
Labor Secretary
Hilda L. Solis responded to the report with an e-mail statement, saying, “There is no excuse for the disregard of federal labor standards — especially those designed to protect the neediest among us.” Ms. Solis said she was in the process of hiring 250 more wage-and-hour investigators. “Today’s report clearly shows we still have a major task before us,” she said.
The study’s authors noted that many low-wage employers comply with wage and labor laws. The
National Federation of Independent Business, which represents small-business owners, said it encouraged members “to stay in compliance with state and federal labor laws.”
But many small businesses say they are forced to violate wage laws to remain competitive.
The study found that women were far more likely to suffer minimum wage violations than men, with the highest prevalence among women who were illegal immigrants. Among American-born workers, African-Americans had a violation rate nearly triple that for whites.
“These practices are not just morally reprehensible, but they’re bad for the economy,” said
Annette Bernhardt, an author of the study and policy co-director of the National Employment Law Project.
“When unscrupulous employers break the law, they’re robbing families of money to put food on the table, they’re robbing communities of spending power and they’re robbing governments of vital tax revenues.”
When the Russell Sage Foundation announced a grant to help finance the survey, it said that low-wage workers were “hard to find” for interviews and that “government compliance surveys shy away from the difficult task of measuring workplace practices beyond the standard wage, benefits and hours questions.”
The report found that 57 percent of workers sampled had not received mandatory pay documents the previous week, which are intended to help make sure pay is legal and accurate. Of workers who receive tips, 12 percent said their employer had stolen some of the tips.
One in five workers reported having lodged a complaint about wages to their employer or trying to form a union in the previous year, and 43 percent of them said they had experienced some form of illegal retaliation, like firing or suspension, the study said.
In instances when workers’ compensation should have been used, the study found, one third of workers injured on the job paid the bills for treatment out of their own pocket and 22 percent used their health insurance. Workers’ compensation insurance paid medical expenses for only 6 percent of the injured workers surveyed, the researchers found.