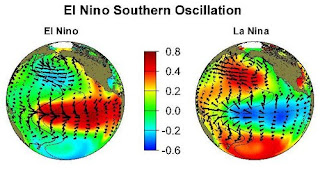 Here is some more connecting the dots in the business of climate modeling. This is hardly a reassurance that core players think that the science is settled. Most important is the apparent complexity of the linked events. This is very sophisticated and promises years of sleuthing. Surely no one thinks we are about to run out of connections to link up.

And that is the point. These type of links are seductive, yet a sudden change elsewhere might totally change all of them as we disappear into the world of fine detail.

At least the climate models must be getting more realistic.

This is still neat work any may hold up. That it shows early signs of having predictive power is very encouraging