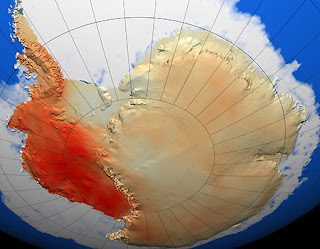 Once again the science described here is early days. The explanations here are at best speculative. I simply do not see how someone can talk with such assurance about the effect of the ozone layer. Even that theory is and was speculative, yet the weight of time has allowed it to land in textbooks for the last generation of young scholars to accept. This is why there is a fight to stuff creationism into textbooks.

The empirical fact is that the Antarctic appears to have cooled over the same time span as the north has warmed. Our data gathering has only become good enough in the past three decades to even begin to make tentative guesses.

If I were to make a conjecture at all, then I would propose a natural mechanism that rebalances the two sides of the equator. It would need to be an ocean current stimulated by the increasing amount of cold water. If that conjecture were to hold up, then we likely have one to two centuries to wait.

I do not think that any other mechanism is convincing unless they are not linked at all and that seems unlikely. But once linked, I need no other theory to settle things except to say that in the natural course the south gets colder and the north gets warmer until a tipping point is reached. In the meantime it is all well masked by atmospheric activity.

And if I need no other mechanism than the biggest and strongest, why look too hard? We will need to learn the nature of this mechanism and estimate its likely timing. I am becoming more and more comfortable that the little ice age was brought on by an unusual injection of deep Antarctic water into the South Atlantic that cooled the Gulf Stream.

Ozone depletion has caused more intense low pressure systems (shown in blue) to develop over the Amundsen and Ross Seas, while higher pressure systems (red) have developed on the periphery of the Southern Ocean. Ozone loss has likely strengthened the cyclonic wind flow across the Ross Ice Shelf and made winds cooler and stormier. Such changes can increase sea ice extent by pushing ice offshore and maintaining coastal polynyas (inset), areas of open water that tend to produce and export sea ice rapidly.