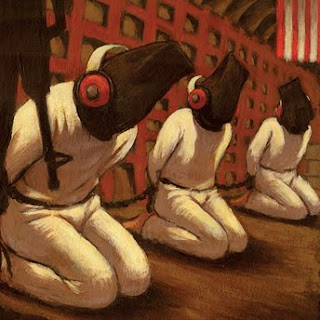 I hope this is just the beginning of a cleansing of the apparatus of government of the recently developed tendency to over reach the bounds of established custom and law. Our elite have forgotten the lessons of the Nazi tyranny in Germany. Good men can be cajoled into great evil if they have the apparent sanction of the state.

Torture is a problem that will not go away. The reason for this is that it is an effective battlefield tool of brief duration. Thereafter, the opportunity is lost and skillful interrogation is the remaining option and that does not use torture because the operator and subject are communicating.

Yet we have circumstances in which high value subjects were successfully pumped after severe torture was applied for a sustained period.

The point behind all this is that there is a major element of professional judgment involved in deciding what level of coercion needs to be applied. That implies that a decision protocol needs to be applied not unlike those applied when a person is dying under medical care.

Someone other than the folks applying procedures must have final authority and each such unusual application needs to then be subject to a judicial review as to the situational ethics. In short, this will make it difficult for gratuitous applications to occur, which is the real objection.

I have watched with concern how in the past decade and even earlier, various elements of the US bureaucracy take on abusive authority that was never theirs and it was always in the name of expediency. Do you not think that a local prosecution system that has a ninety percent conviction rate is ferociously gamed in favor of the prosecution?

A large part of this poison has been fed by the unwinnable conflict with the drug trade that presently supports the so called Afghan insurgency but is better described as the Pathan drug lord insurgency. It takes money to get young unemployed men out in the field and the only local source there is opium.

Step by step, the USA has been dragged down the path of ethical expediency, principally because of a failed drug war policy that has actually promoted the growth of the trade.

I am not too optimistic that this recent turning back of the tide is particularly lasting.