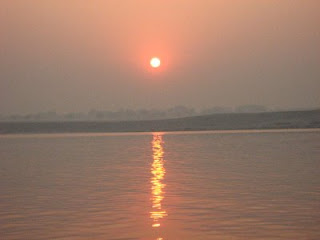 Another geographic consideration arising from the book by Prithvi Raj on the historical content of Indian scriptures is the representation that the Ganges arose in its present form about a thousand years or so after the primary event I have called the Pleistocene Nonconformity.
There was a time that when confronted with such a proposition, I would have dismissed it out of hand. Then I discvovered that one could get there from here.
So the question right of is can we reconcile this with our model as we have reconciled the submergence of the Maldive Archipelago in the Indian Ocean. Again this part of the crust was accommodating compression and the prior mountain building provided a natural fault system able to accomplish this. So it is fair to assume that the mountains rose several thousands of feet at least if not a lot more. After all they are presently the tallest in the world and are comparable only to their near equivalent in the Andes on the same arc and same effective position.

This produced a valley sub parallel to the newly raised mountain range and possibly upheaved Tibetan plateau (?). Massive precipitation at the eastern end of the range north of Burma began cutting several major river systems including the Mekong. Water began filling the valley and draining westward. This valley breaks out close to Pakistan and enters the present plain of the Ganges.

Prior to a final breakout, the valley was certainly blocked in multiple locations with massive landslides and intrusive structures. It is quite plausible that that primary blockage was a weak landslide that allowed the accumulation of water. It is thus reasonable to assume that the water accumulated for centuries behind this natural blockage. In fact it is highly reasonable considering the incredible terrain itself. A thousand or so years of water accumulation is very reasonable.

I also note that the geology of the area is incredibly young. I have reviewed a photograph of a major sheer cliff in those mountains that showed little accumulation of scree yet was formed from sediments. It was implausible and demanded a recent genesis. In short, if those mountains were a million years old, the valleys would be choked with material as is constantly coming off those mountains today. They are not particularly choked at all.

That such a water buildup took place appears almost inevitable. That its release would be dramatic is also inevitable as the rushing waters would swiftly scour out the valley bottom for its full length. The amount of water held could have approached that of a small great lake and produced a huge flow that took weeks to subside.

We thus have a mechanism for producing the river bottom of the Ganges as a one time event. Before this happened, the rains had already created an active riverine system flowing off the front of the Himalayas and possibly producing several rivers flowing along the Gangetic plain to its huge delta. When the impounded waters began their release, a huge torrent proceeded to scour out a deep and broad valley down through this established sedimentary plain. In short, it is possible to provide a valid explanation for the abrupt rise of the Ganges that fits the cultural record.

It should be easy to piece together the geologic record, and someone should already have had his eyes open because of the note in the cultural record.

I also noted that before the event of the nonconformity, that a barrier mountain range is reported to be cutting India across the center in an east west direction. There was an equally important plain north of this barrier. If we simply look to the Himalayas as the original barrier range, its location is solved. This means that the cultural sources were describing a much larger geographic area than supposed where the southern portion fell south of the equator and the northern portion, plausibly as large fell north of the equator.

I would like to note that Prithvi Raj’s historical reconstruction and my own work are arriving at the same conclusions from very different directions and are agreeing very well. The knowledge of the crustal shift and the derivative knowledge of the impact along the arc of maximum movement on local crustal curvature is easily providing guidance in understanding the reported events. More important, the right things are happening in the right place.

It is significant to observe that populations still survived although coastal damage must have climbed into the hills. It also becomes plausible that populations of herders began to migrate into these broken lands quickly to escape suddenly long bitter winters in their own homelands.
Posted by arclein at 12:28 AM