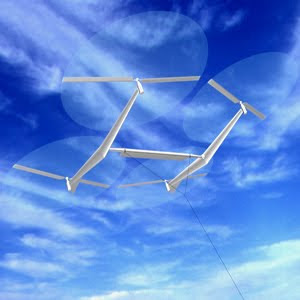 I must admit that I see no future in a kite based generating system. Yes the energy is up there and it is happily exploited from time to time by miles high convection cells called thunderstorms. The idea of a million dollar chunk of hardware been fed into that is not attractive.
So a lot of that wind energy needs to be consumed flying the kite into high altitudes that are possibly quiescent. This while supporting the dead weight of the tether. What is more, there is no way to haul it down and land it conveniently at the local airfield. What are these guys thinking?
The only fix that I can see to the design concept is to add another tether on this sucker and attach super balloons that somehow find a quiet spot above this contraption.
Anyway they found some money and some folks do have the fever and some of the design ideas even look interesting. This song will not end until a few of these devices crash spectacularly.
Somehow the idea of a large power generator flying aloft over my head is not reassuring no matter how lightly built. That begs a very big question. Where do you put these suckers if you actually have a system that you trust to perform? There is no way to secure point of impact if something goes wrong.
I am trying to be generous here but I admit to difficulties. I also am not certain that problems might abate as the device is scaled up as has happened in most other energy technologies. After all the wind turbine business took off once the larger sizes were available and that would also be true for tidal power.
Anyway, let us wish them luck and hope that they can surprise.

Popular Science's most recent magazine (on newstands Sept ,2009) has a brief two paragraphs which indicate that Kitegen is building a 3 megawatt system with 1500 square foot kite sail. This is scheduled to be completed in 2011. This is 75 times larger power than a 40 kilowatt demo system that was produced.
•max power: 40 kW
•lines length: 1000 m
•kite area: up to 20 m^2
The new system will have
•max power: 3000 kW
•longer lines
•kite area: up to 150 m^2
About 5 months ago, this site noted that kitegen had gotten funding for larger project work and the developers indicated in the comments and email that the funds had not been dispersed at that time.
Here is a 39 page presentation from May 2009 by Mario Milanese on Kitegen.
http://2.bp.blogspot.com/_VyTCyizqrHs/Sq68IJ2BWII/AAAAAAAAE88/HLBNKQpqOm4/s1600-h/kitegen2.jpg
OTHER HIGH ALTITUDE WIND PROJECTS* Sky WindPower, S. Diego
* MagennPower, Ottawa
* Laddermill, Delft University
High-altitude winds hold a huge energy potential waiting to be harnessed. “If you tapped into 1 percent of the power in high-altitude winds, that would be enough to continuously power all civilization,” Caldeira said. In comparison, similar solar cells would cover roughly 100 times more area than a high-altitude wind turbine, he said.
Archer and Caldeira found the highest wind densities over Japan, eastern China, the eastern coast of the United States, southern Australia and northeastern Africa. Included in the analysis were assessments of wind energy above the world’s five largest cities: Tokyo, New York, São Paulo, Seoul and Mexico City. “New York … has the highest average high-altitude wind power density of any U.S. city,” Archer said.
In order to capture the energy in these jet streams, manufacturers are developing a variety of kite turbines that convert kinetic energy in wind to electricity. Manufacturer Sky WindPower designed a model consisting of a single tethered kite of four connected turbines, each with spinning rotors. The kite transfers the electricity back to a hub on the ground through its tether.
Another model, being developed by Kite Gen, looks like a rotating carousel, based on the ground, with several kites tethered to it. Each kite’s flight pattern is controlled from the ground to capture the most wind, and as the kites circle in the air, they catch the wind and tug on their tethers. The tension triggers a pulley system that converts the energy of motion to electricity.
Though sky-high currents offer huge potential, kite fliers face the challenge of a fluctuating wind. “While the winds at high altitude are much more consistent than the winds at the surface, they’re still not consistent enough,” Caldeira said. For example, if you flew a kite turbine in your backyard to power a house, at some times the wind would blow and at other times, it wouldn’t, he said. As a result, there would be gaps in the flow of electricity.
Posted by arclein at 12:12 AM

CRN is a number system in Canada in which the number is issued by each province/territory of Canada to the design of pressure-containing equipment. This numbering system recognizes that design has been approved and registered for use under that province/territory. All boilers, pressure vessels, piping, tracing, hoses, and industrial instrumentation fall under this requirement. Know more about CRN Canada and JMengineering.ca