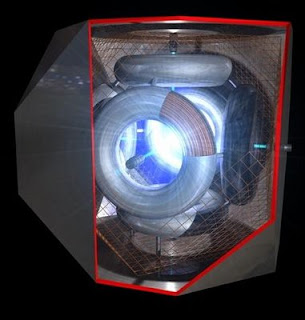 This is welcome news. My misgivings regarding what was now obviously the initial tranche a few months back was based on the size problem. While we all know that the funding for tokomaks is out of control by its very nature it is also obvious that a too small budget makes it impossible for a principal scientist to easily dedicate full time to this project.
That is all behind us now, and this update gives us a sense of how long it may all take. Observe that a commercial product is plausible in five years. This must be progress compared to the Tokomak which has absorbed my lifetime and massive wealth without anything that could be misconstrued as success.
Both this technology and the focus fusion technology work up well in simulation and initial testing. Now we will try over the next few months to get them all over the hump. Both proponents believe it should work, but all know that it can easily fall short if some minor effect becomes dominant as has happened in fusion work before.
I want them both to work. They may even support separate applications before we are done.
I also note that an allusion is made to space travel and that surely means the use of ion impulse engines to get things going. The Bussard device is going to be a large power plant at the least in order to be viable, but a small increase in size will permit an energy output increase that will be cubic at the least.
I am much more encouraged by the focus fusion system which is tailor made for space craft. One can readily envisage a power train with that source that is naturally compact. It would simplify matters immensely if such a craft gulped air in the lower atmosphere or particles in space and in either case imparted ionizing energy and electromagnetic acceleration sufficient to produce the necessary trust. It cannot be that simple, but you get the idea. If it could be, then flying into space will be as safe and as boring as a trip to a major US city.
I am also encouraged by the prospect that this technology can be proved out inside of twenty four months. I wish we could have found a way to do that to Tokomak. Of course we still find ourselves holding a teaser in our hands. Welcome to the mining business. Sometimes, as in the mining business, success is made, not so much discovered.

CRN is a number system in Canada in which the number is issued by each province/territory of Canada to the design of pressure-containing equipment. This numbering system recognizes that design has been approved and registered for use under that province/territory. All boilers, pressure vessels, piping, tracing, hoses, and industrial instrumentation fall under this requirement. Know more about CRN Canada and JMengineering.ca