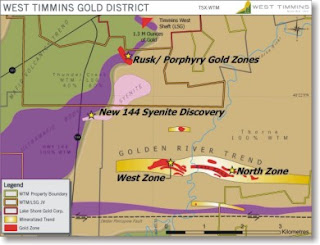 I have been around mining finance for almost forty years and have experienced many mine discovery markets.

A major discovery market is developing around the recent West Timmins deep gold intersection published during the summer. There will be plenty more information to come but the thick intersection and solid grade makes the tenor of the mine. Truly major mine discoveries come along every few years or so. This is in that category. The thicknesses been encountered is a magnitude higher that typical for gold ores and the scope of the structure is also measured in kilometers and goes to major depth.

A major gold camp will produce fifteen million ounces and this one looks to be running away with it. The exceptional grade occurs as we go to depth so it is even plausible that this camp and not just this deposit may shape up someday to even match the productivity of some of the great mining camps. In the event, the ride has begun and if you must participate, the best advice that I can give anyone is to buy the leader and ride it. Most others will be dust in a couple of years and only pros can succeed there.

You are unlikely to ever see gold intersections quite like the best reported here so far. So enjoy them and remember that intersections of a few feet at a fraction of the grade also make gold mines. They will still be drilling for some time to build tonnages. That means we will be seeing more interpretive reports and the like as results flow.

This is a recent report and is a follow up to an earlier report that showed deep intersections with much higher grades.

Those intersections provided grade that has the benefit of turning a lot of gold bearing mineralization into valuable ore.

Assay reports are in the original news release, but were not transferred on copying. the text notes highlights.

PLEASE NOTE I have no interest in the stock of this company or any related company at the time of writing.