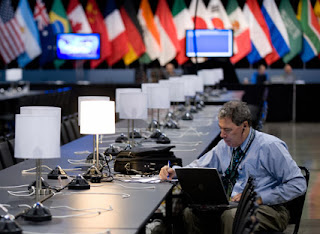 This is one step that I can agree with and that every country can enable as a common action. If all are doing this, there is no lobby argument that stands at all.

Now if we could now do the same thing with agricultural subsidies world wide making it a condition for maintaining the right to trade a given commodity. The subsidy game has been a way to play beggar my neighbor and has merely led to mutual damage unless you think free trade in agricultural goods between Europe and north America is unsustainable.

In fact the developed countries have all subsidized their agriculture to a huge degree an a competition to the bottom. This has meant that we have a form of consumer subsidy going on that is distortive. It has made it difficult for everyone else to break into our markets.

The good news is that developing countries are getting wise to the game and are starting to create working offsets to move their product and their own subsidies of course. In time, it will all sort itself out.

In the meantime, China and India have robust agricultural sectors whose expansion in output is easily keeping up with demand. A famine threatens in India and it is easy to divert global reserves to the Indian market.

Anyway, the simple application of a price guarantee for wind power and geothermal power will swiftly see the carbon based industry replaced though simple replacement as plants cycle to the end of their lives. Even early windmills are now been replaced with better gear.

As I have posted, we are going to see the oil supply drop from 85 million barrels per day to a stable 50 million barrels per day or less over the next decade or so. That is why the explorers are finally tackling the likes of politically volatile West Africa and just about any place with a hope in an attempt to sustain present levels. The shoe really has not dropped yet but it will take very little to expose our vulnerability and force the globe into oil rationing.

Leaders of emerging and developed nations agreed Friday to a plan to phase out government subsidies for fossil fuel blamed for global warming, a joint statement said.

"We commit to rationalize and phase out over the medium term inefficient fossil fuel subsidies that encourage wasteful consumption," the leaders said after a two-day Group of 20 summit in .

The leaders asked their energy and finance ministers to "develop implementation strategies and time frames" for the phasing out of the subsidies.

"We call on all nations to adopt policies that will phase out such subsidies worldwide," the statement said.

The leaders however underlined "the importance of providing those in need with essential energy services, including through the use of targeted cash transfers and other appropriate mechanisms."

Key G20 nations China, India, Russia and Brazil reportedly are among the top spenders of fossil fuel subsidies and are unlikely to easily agree to any plans to slash them.