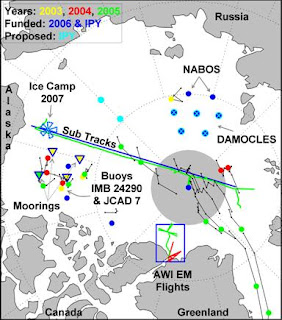 This means that I can ignore the pre 1980 data and focus on the decline since.

The measured thickness has declined by 53% which easily explains the sharp drop in areal extent also. It has all happened in twenty five or so years and is accelerating because the heat been absorbed has progressively less ice to work with. Also the process has not ended yet. Today’s ice I believe is the thinnest yet.

The real point that must be made is that this process has not ended or reversed.

This continues to be the one tangible bit of evidence that is indisputable about so called global warming. It also suggests that we could be on the verge of quite warm Arctic summers. Real vegetation in the Arctic?

This also allows us to fine tune our calculations and we find that multiyear ice will likely be gone in about a decade at most. We are now in the visible melt out phase of this Arctic clearing event. A good wind system like 2007 will also accelerate it just as a strong cooling event will reverse the process.

Which means that the open seas will take a bit longer but not much longer and expect another surprise in the decline of areal extent.

Satellites And Submarines Give The Skinny On Sea Ice Thickness

Patterns of average winter ice thickness from February to March show thicker ice in 1988 (left), compared to thinner ice averaged from 2003-2008 (right). Thickness information in Antarctica is limited to an irregular polygon shape that outlines the area where declassified submarine data are available. Credit: Ronald Kwok/NASA