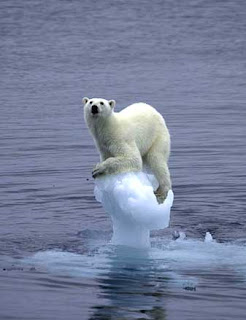 I certainly do not go to these sources for creditable scientific interpretation. They have long since succumbed to their biases and often publish nonsense. This limits them to their core believers and provides no leverage anywhere else. This I find unfortunate because I believe the mission of either is praiseworthy but execution is in the hands of propagandists rather that anyone capable of making an impact.

The present argument is attempting to promote the modest decadal warming in the Arctic into something much more. It isn’t. First of the net change is a mere degree. This reflects a very modest increase in the vastly larger southern latitudes. In fact it is a down grade from earlier less accurate measures. The point that I want to make is that the areal extent of the Arctic is possibly a seventh of the areal extent of the lower latitudes. Thus we are possibly looking at a seventh of a degree change from that quarter.

The warming of the Arctic was about the only credible indicator we had of a warmer northern hemisphere. It halted two years ago just after a pretty good dump of heat into the Arctic by winds. One could say that the rest of the hemisphere is now trying to warm up again.

This article rehashes the usual global warming story. However, the ice pack is a result of the minor fact that the sun fails to provide heat for a few months. There will always be an ice pack even if the Arctic summer is tropical. If we are really lucky, we may get rid of most of it for a week or two.

Greenland glaciers melting faster than ever: NGO
Greenland's glaciers are melting into the sea faster than ever before, the environmental pressure group Greenpeace claimed on Wednesday. Glaciers move when melting occurs from the effects of global warming, causing masses of ice to slide into fjords and the sea. Greenland's Helheim glacier, which measures six kilometres wide (four miles) and is one kilometre thick, moves about 25 metres (yards) a day, Greenpeace said in a statement. The group said that is twice as fast as when its Arctic Sunrise vessel last visited Greenland in 2005. The speed of the other major glacier in Greenland, Kangerdlugssuaq, is even more dramatic. It moves some 38 metres a day or 14 kilometres a year, Greenpeace said. "Kangerdlugssuaq Glacier is probably the world's fastest moving glacier," said Dr. Gordon Hamilton, from the University of Maine's Climate Change Institute. Hamilton is a member of this year's Greenpeace expedition currently inspecting the glaciers in the north and east of the Danish territory. The group's Arctic Sunrise vessel left for the region at the end of June and is due to complete its mission at the end of September. The two glaciers produce 10 percent of Greenland's ice output into the North Atlantic. Glaciers that shed their ice cause sea levels to rise. Sea levels are currently on the increase by three millimeters a year, according to Greenpeace, and pose a serious threat to people living on islands or in coastal regions.

Global warming in the Arctic could affect a quarter of the world's population through flooding and amplify the wider impact of
climate change, a report by environmental group WWF said Wednesday.
Air temperatures in the region have risen by almost twice the global average over the past few decades, according to the peer-reviewed scientific report.
That is not just down to melting the polar ice pack, a major cooling agent for global weather patterns and reflector of sunlight.
It is also linked to the release of more of the greenhouse gases responsible for global warming that are naturally trapped in frozen soil, it claimed.
"What this report says is that a warming Arctic is much more than a local problem, it's a global problem," said Martin Sommerkorn, senior climate change advisor on the WWF's Arctic Programme.
"Simply put, if we do not keep the Arctic cold enough, people across the world will suffer the effects," he warned.
The combination of thawing Arctic sea ice and
melting ice sheets in Greenland and West Antarctica was likely to raise global sea levels by about 1.2 metres (four feet) by 2100, more than previously thought, according to scientists commissioned by the WWF for the report.
"The associated flooding of coastal regions will affect more than a quarter of the world's population," the WWF said.
Scientists have expressed concern in recent years about the now visible melting of the Arctic region, to the extent that some have predicted virtually ice-free summers there this century.
The full impact of polar melting has yet to be taken into account by the Intergovernmental Panel on Climate Change, the scientific reference for world
Sommerkorn said the melting was already having an effect on the weather in the northern hemisphere, such as drier conditions in Scandinavia or the southwest of North America, or more humid Mediterranean winters.
However some climatologists at the World Climate Conference here urged caution about such short-term judgments, while acknowledging the major long-term influence of Arctic melting on the world's climate.
"We see that summer sea ice is likely to disappear by 2060," said Vicky Pope, head of climate change advice at Britain's Met Office.
"But I don't think we understand the physics yet," she added, pointing to possible natural variability to account for recent local weather patterns.
The WWF report concluded that melting sea ice and the release of pockets of greenhouse gases -- carbon dioxide from thawing permafrost and methane seeping from the depths of the warming Arctic Ocean -- would also fuel disruption to atmospheric and ocean currents much further afield.
Arctic permafrost stores twice as much carbon as contained in the atmosphere, acording to the WWF. Some 90 percent of near surface permafrost in the Arctic could disappear by the end of the century, the report found.
That trend could significantly accelerate global warming and force a shift in emissions targets, Sommerkorn told journalists.
"If we allow the Arctic to get much warmer it is really doubtful whether we will be able to keep the
UN Secretary General Ban Ki-moon, who is due at the conference later this week, on Wednesday urged world leaders to act now to halt global warming, after seeing first-hand its effects in the Arctic during a visit to Norway.
"The Arctic is similar to sending a canary into a coalmine -- this is a danger warning for the global climate," he said.
World leaders will gather at a UN
climate
summit in Copenhagen in December to try and seal a new international accord on fighting climate change.
Posted by arclein at 12:54 AM