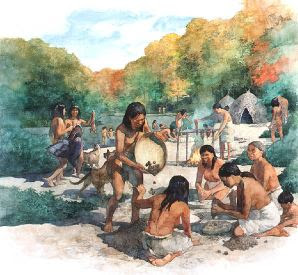 I find the conclusion that there been no DNA evidence of the original population to be a bit premature. Farming societies immediately deliver large populations that easily swamp the indigenous populations. Look at the story of the meager population of nomads in Borneo and their present day absorption into the surrounding population of agro-urban man. The sheer weight of population would make their DNA signature meager.

Ancient populations engaged in one form of ethnic cleansing that usually eliminated the men of a target population. It was normal to adopt the women and even the children. Thus in a single generation a superseded lifeway could be absorbed genetically.

Three more generations or so and no evidence would even exist. This essentially happened to the Eastern Indian tribes in North America in the first two centuries of contact. A combination of the slave trade and intermarriage overwhelmed the original populations although they held it off for a long time.

In our world we also have the myth that these populations somehow died out. The truth is that it is unlikely that this is what occurred although there are instances of localized populations overrun by disease.

The last of their kind: the nomads of Borneo