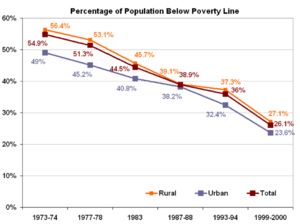 Much of what we think we know in terms of living conditions in the most backward countries is terribly anchored in the past. That is why it is a good idea to pore over related statistics from time to time to get a sense of what might actually be happening. This tells us that the news is rather good.
The main impediment to transitioning to an eight percent growth rate as in China and India is a lack of government supported credit. Think about Hyundai who became a conduit for large scale capital investment at the national level.
These countries are growing through the use of the internal credit of families. They are doing as best they can. A lot of things can be done to enhance this growth, but even without that the people are pulling themselves up by their bootstraps.
Today, everyone can get some form of access to the internet. In no way are they denied access to appropriate knowledge. In fact, one can easily imagine a whole village learning that a new crop or method can improve their lot, whereupon someone would be delegated the task of walking to the nearest internet to print out appropriate data. Without a top down educational outreach program as was needed only a decade ago, this village is leaping ahead.
I am observing the implementation of zai holes with biochar by an informant in Ghana on barren compacted soils. This can restore thousands of acres of once productive soils. Thanks to this ad hoc participation by a network of informants around the world, he has progressed. His success could jump start an agricultural revolution in West Africa.
That is the real message of this modern world. We can make information available to everyone. And remember 63,000,000 nigerians have cell phones.
September 02, 2009
Technology and Economic Growth Enter Into the Heart of Scarcity
Africa Has Had About 6% Annual GDP Growth and 3% per Capita GDP Growth Since 2001
http://4.bp.blogspot.com/_VyTCyizqrHs/Sp_233JLJeI/AAAAAAAAE08/Gp1PHm2GwJU/s1600-h/gdpgrowthafrica.jpg
http://1.bp.blogspot.com/_VyTCyizqrHs/Sp_2wked1JI/AAAAAAAAE00/cA3FHQpb2YQ/s1600-h/africa_gdp_growth19982008.gif
In 2009, the economic crisis has hurt growth but much of Africa is heading back to 4-5% growth in 2010 and probably back to 6% growth in 2011 onwards.
Economic Growth Has Had a Positive Impact on Poverty Reduction and Other UN Millenium Goals
The UN millenium goals report for 2009, shows solid progress. 2009 saw slowing of progress and some backsliding because of the financial crisis.
A mid2009 UN report shows that GDP growth in the 2-5.5% is expected in Africa in 2010.
The IMF raised its GDP growth expectations in July 2009.
The African and middle east economies have performed relatively well in this crisis.
Africa 1.8 4.1
Emerging and developing economies 1.5 4.7
Wikipedia list of countries by future nominal GDP per capita (from the IMF) shows solid growth for most of the poorest nations.
Africa's total population is about 1 billion. The ten largest countries have about two thirds of the population.
http://en.wikipedia.org/wiki/List_of_countries_by_future_GDP_(nominal)_per_capita_estimates

Africa is Getting Some Technology and the Tech is Improving Lives

Foreign Policy: Thing Again Africa's Crisis Africa, the continent is in far better shape than most experts think.
Some countries in the region are as poor as England under William the Conqueror, but that doesn't mean Africa's on the verge of doomsday. How many serfs had a cellphone? More than 63 million Nigerians do. Millions travel on buses and trucks across the continent each year, even if the average African road is still fairly bumpy. The list of modern technologies now ubiquitous in the region also includes cement, corrugated iron, steel wire, piping, plastic sheeting and containers, synthetic and cheap cotton clothing, rubber-soled shoes, bicycles, butane, paraffin candles, pens, paper, books, radios, televisions, vaccines, antibiotics, and bed nets.
The spread of these technologies has helped expand economies, improve quality of life, and extend health. About 10 percent of infants die in their first year of life in Africa -- still shockingly high, but considerably lower than the European average less than 100 years ago, let alone 800 years past. And about two thirds of Africans are literate -- a level achieved in Spain only in the 1920s.
Thanks to the spread of technologies and new ideas, African economies are expanding fast and population growth has been accompanied by better health. The continent of Africa has seen output expand 6½ times between 1950 and 2001. Of course, the population has grown nearly fourfold, so GDP per capita has only increased 67 percent
Some widespread health conditions in the region -- notably HIV/AIDS -- are still expensive to treat. But the most effective interventions for promoting health in Africa are remarkably cheap. Breast-feeding, hand-washing, sugar-salt solutions, vaccines, antibiotics, and bed nets together save millions -- and could save millions more -- and none need cost more than $5 a pop. Rollout of a vaccination program, for example, has slashed annual measles deaths in the region from 396,000 to 36,000 in just six years. And though Chad isn't going to see universal college enrollment anytime soon, some very poor countries have already achieved near-universal primary education based in large part on free schooling.
A lot of aid to Africa is wasted, and some goes to support silly ideas or countries that can't use it well. But aid has also supported some programs that have made a real difference in quality of life -- things like supporting the measles vaccination program, helping to eradicate smallpox, fighting river blindness, funding educational radio programs, building sewage networks, and providing scholarships so that poor children can afford to stay in school
Cellphones Can be Cheaper than Clean Water and Sanitation
There is clearly a need for clean water and sanitation.
In 2003, 1.6 million deaths were estimated to be attributable to unsafe water and sanitation, including lack of hygiene; 90% of this burden is concentrated on children under five, mostly in developing countries. In spite of the considerable investment in the provision of water supply and sanitation in the 1980s and 1990s, in 2000 a significant proportion of the world’s population remained without access: an estimated 1.1 billion people were without access to improved water sources and 2.4 billion people lacked access to improved sanitation. Expanding this access is essential to reduce the burden of water-related diseases and to improve the well-being of a large part of the world's population.
Clear dirty water is a serious problem but it usually does not kill people right away. It makes people sick and causes a percentage of deaths of children and the elderly. But clean water and sanitation projects tend to be large infrastructure spending efforts. The overall problem would need $25 billion/year for improved water and sanitation for all who currently need it and then about $150 billion/year for real infrastructure fix. Those numbers are for thousands of mostly million dollar and multi-million dollar projects across a hundred countries and dozens of projects in each country.
Cellphones are bought by individuals and can help connect people to finance and banking and helps with irrigation and farming with weather reports and connection to information. There is immediate financial gain by better access to markets, savings in time (do not need to travel someplace -you can just call) and allows for business opportunities. The rollout of cellphone networks by providers is far cheaper than the rollout of water/sanitation infrastructure and the economics for the providers is far better.
Africa: Cellphones Tipped to Drive Growth in Poor Nations
The mobility, ease of use, flexible deployment, and relatively low and declining roll-out costs of wireless technologies enable them to reach rural populations with low levels of income and literacy.
The report says the next billion mobile subscribers will consist mainly of the rural poor.
An important use of mobile phones in rural areas is to access market information.
TradeNet, a Ghana-based trading platform, allows users to sign up for SMS alerts about commodities and markets while receiving instant alerts for offers to buy or sell when anyone else on the network has submitted an offer.
Read more on the transformative benefits of cellphones in Africa:

Cellphones lower cost of irrigation
Cellphones support access to clean water
Africa: Cell Phones Transform Continent's Development
Cellphones enable a financial revolution in Africa
Getting cellphones to rural Africa is a challenge and there are ingenius solutions.
Millenium village projects to solve poverty and other problems in Africa and other poor regions.

Conclusions
1. Africa is growing fairly fast now and has been for a decade. This could be the beginning of a multi-decade journey like the one in Asia to prosperity for the region.
2. Technology like cellphones or new technology that is emerging that costs less than $50-100/year per person and can be rolled out in smaller overall project sizes and with faster project return on investment will have a faster distribution than clean water and sanitation projects.
3. There are still plenty of super-cheap per person assistance to be done by the people themselves or with international aid that can save many millions of lives and improve quality of life.
4. Technology is a major force in ending extreme poverty.

Fight poverty and global warming at the same time with carbon offsets. Through projects like the one supported by Live Climate, you can support communities and offset your carbon footprint.