Nitrogen and the Ozone Layer 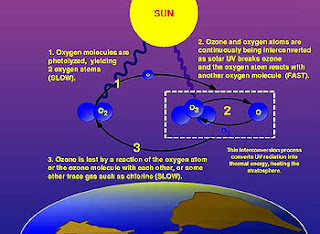 I find this particular conclusion rather odd and am rather curious how it is supported at all. There are two issues.

The first is that the bulk of atmospheric nitrous oxide is produced by lightning and a lot of that is at a high altitude making it easy enough to support injection into the stratosphere. The only high altitude nitrous oxide we produce would come from jet engines and it is hard to see how we could get reliable measurements to describe the effect globally.

The second is that it is a heavy enough molecule that combines with water vapor and becomes acid and is heading down to the earth as precipitation sooner than later. For this reason, it was left out of every one’s calculations when it came to treaty making. A more likely scenario, is that ammonia is oxidizing somehow as it rises to the troposphere and this factor may have been locally increased by human activity.

Beyond that, it again begs the question of why we need to be concerned. Here it is represented that it is affecting the ozone layer, but only in a way that is naturally occurring anyway and possibly going through major peaks every time a volcano blows up. Mother Nature is set up to process this particular gas. That was never true for the refrigerant that started accumulating up there.

The advent of the universal application of biochar in agriculture will lock up unused agricultural nitrogen as it is been deployed over the next few decades and this will bring all such types of concerns under proper control. Nitrogen will no longer escape into the hydraulic system and that which is there will be naturally consumed. Global agriculture will be able to operate with vastly less nitrogen been manufactured on a per acre basis with the biochar protocol.

If you are unfamiliar with biochar, search my blog. Otherwise, it is safe to assume that every acre of agricultural soil will by having a minimum of several tons of carbon in the form of biochar applied to the soil. The soil benefits are singular and the carbon naturally grabs free ions of nitrogen to hold until taken up by the root system.


by Staff Writers
Washington (AFP) Aug 31, 2009
Nitrous oxide emissions caused by human activity have become the largest contributor to ozone depletion and are likely to remain so for the rest of the 21st century, a US study has concluded.
The study by the National Oceanographic and Atmospheric Agency said efforts to reduce chlorofluorocarbons (CFCs) in the atmosphere over the past two decades were "an environmental success story.
"But manmade nitrous oxide is now the elephant in the room among ozone-depleting substances," said A. R. Ravishankara, lead author of the study, which was published Friday in the journal Science.
While nitrous oxide's role in depleting the ozone layer has been known for decades, the study marks the first time that its impact has been measured using the same methods as CFCs and other ozone depleting substances.
Emissions and production of those substances are regulated under the 1987 Montreal Protocol.
But the treaty excludes nitrous oxides, which are emitted by agricultural fertilizers, livestock manure, sewage treatment, combustion and certain other industrial processes.
Since nitrous oxide is also a greenhouse gas, the scientists said reducing emissions from manmade sources would be good for the ozone layer and help temper climate change.
Posted by arclein at 12:20 AM