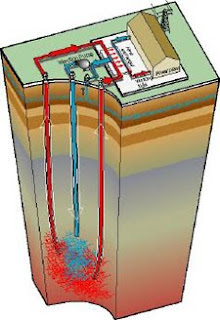 The problem with geothermal is quite simple. It is the oil business without the flush production that immediately recaptures your capital. What is described here is totally predictable and the only way to advance the technology.

What it really means though is that long after the last drop of oil is pumped, Schlumberger and Halliburton will still be fracing geothermal wells. That often can and in this case will cost as much as the original well cost.

Look at how hot those rocks are at merely 6000 feet. In today’s world that is almost shallow drilling. Hydraulic fracturing combined with a fracing sand that can help keep the fractures open should create a huge pool of accessible heat. Getting water back into the heat pool is a necessity. That is why we are still learning.

The Basin and Range region has a vast reservoir of shallow hot rocks. These are plausibly remnants of the super volcano forming Yellowstone passing through.