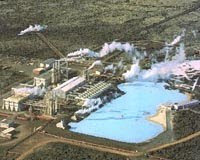 I usually try not to push obvious corporate development, but these guys have positioned them selves to be the dominant geothermal player. This acquisition buys into the best technical brains available to the industry with the best experience. This means that they are positioned to absorb literally billions in new capital for expansion.

They have just become large and any further luck will make them dominant.

Also the industry needs Icelandic expertise to be broadly shared as quickly as possible. I am sure that this will produce that effect.

Anyway, good luck to them and we can add it as a creditable geothermal company to our model portfolio to keep a watch on. There will soon be dozens of start ups who will inevitably chew through capital breaking into this budding industry. This company could step well ahead of the pack.

Vancouver, British Columbia (UPI) Sep 15, 2009
Magma Energy Corp. announced Tuesday it would pursue acquisition of a larger stake in Iceland's geothermal giant HS Orka and increase its geothermal power production footprint worldwide.
Reporting its audited financial and operating results for the fourth quarter and fiscal year ended June 30, 2009, the Vancouver-based company outlined its international operations, including its recent acquisition of 32.32 percent of HS Orka from Reykjavik Energy and two other HS Orka shareholders.
Magma was set up in January 2008. Its acquisition of the HS Orka stake is the largest foreign investment in Iceland since the collapse of its banking sector in 2008.
The agreement provides that a Magma wholly owned subsidiary will purchase the interest for about $29.5 million and a bond for about $68.8 million repayable in a single installment in seven years with interest at 1.52 percent.
The bond will be secured by the shares acquired by Magma in the transaction. Closing of the transaction is expected in late September, Magma said.
On July 23, 2009, Magma announced that it had signed an agreement to acquire a 10.78 percent shareholding in HS Orka and had an option to acquire about 5 percent additional shareholding in the company. If both transactions conclude, Magma would hold a 43.1 percent direct interest in HS Orka and an option to invest $15 million in HS Orka's expansion plans, increasing its stake up to 48.1 percent.
Magma says its mission is to be "the pre-eminent geothermal energy company in the world." The company currently owns one operating geothermal plant and an extensive portfolio of geothermal exploration and development projects in Argentina, Chile, Peru and the western United States, and is actively expanding its projects portfolio worldwide.
Magma CEO Ross Beaty said the Iceland deal gives Magma access to the country's substantial geothermal resources and a highly skilled domestic workforce.
He said the company had a great first full year of operations, raising more than $130 million in tough financial markets, acquiring assets in Nevada and initiating geothermal exploration in Nevada, Idaho, Oregon, Peru, Chile and Argentina.
Magma ended the year with a successful initial public offering and listing on the Toronto Stock Exchange and is entering its second full year in a healthy condition, Beaty said.
HS Orka is the largest privately owned energy company in Iceland with installed geothermal power capacity of 175 megawatts. It plans to increase geothermal power production to 425 megawatt by 2015.
Magma was advised on the transaction by Glacier Partners Corp., a corporate advisory boutique focused on the geothermal energy sector. Glacier Partners CEO Magnus Bjarnason said Magma's acquisition was "a milestone for Iceland" as it recognized the country's "leadership in geothermal energy development."
Environmental campaigners, including singer-songwriter Bjork, have argued against overexploitation of geothermal energy, which they want conserved for future generations.
Posted by arclein at 12:40 AM