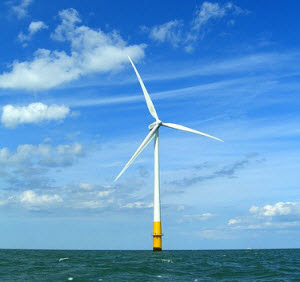 This report is out from Pikes Research but is pricy for the non industry reader. In the event, the summary gives us the important information that growth was fifty per cent over the past year. This year has seen barely a pause. In fact, from my own informants I know that projects were briefly put on hold and then went straight ahead.

As posted earlier, wind is on a tear. Industrial America wants their share and the lending industry wants the product because it is as good as it gets from a lender’s perspective. After all the fuel is free and the hardware is practically bullet proof and can operate for decades past the last payment. The only variable expense is how much to pay the accountants.

It will grow strongly this year and next year and likely straight through 2015.

I would also say that public acceptance is at an all time high. Builders seem to be staying away from any urban development and the attendant noise issues, and farmers who are stakeholders are obviously quiet, just like the oil business. Besides they look better than all those bill boards on the interstates.

Now we need to see the same building boom get rolling on geothermal in Nevada and our energy needs will be well on the way to been fully solved with fuel free systems.

Whatever government may think it is doing, it is clear that the American business community has decided to displace the oil industry and the coal industry just as fast as possible, even if it is possible to squeeze decades more out of the business.

Just remember, replacing oil, gas, and coal is an incredibly profitable business proposition. The only thing likely to compare to it in industrial history would have to be the Second World War. And it is completely financed through the most conventional lending sources. All government needs to do is largely stay out of the way.

In 2008, United States wind power generation capacity passed the 25 gigawatt mark by adding over 8 gigawatts from the year before, which represented the largest individual gain of any country in the world. This growth rate of 50% exceeded that of the year before, indicating that the market is still relatively young and has room to grow, despite the economic slowdown. The market for wind turbines will continue to grow through 2015 driven by new generation additions as well as replacements of smaller, older turbines with new, larger, more efficient turbines. In 2007, generation capacity from renewable sources made up only 4% of the world’s electricity sources, but 16% of new electricity generation capacity additions were from renewables with wind power making up more than 80% of these gains by renewables.

The year 2009 will be a defining moment for wind power markets around the world. The global economic crisis that began in late 2008 has thrown the industry into confusion, along with most other global industries. Two competing market views exist, and representatives from each camp were interviewed for this report across the wind power value chain, such as components suppliers, turbine OEMs, wind developers, and power providers.