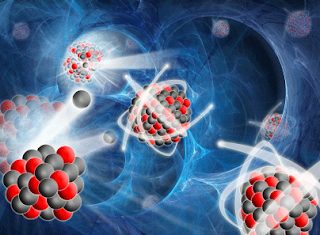 These guys have developed some apparently cheap ways to collect uranium from seawater. The cost basis indicated at the lab level anyway is the same as present day uranium production. It will get costlier once engineering begins.
What it certainly provides is a stable ocean of product at a price that is already within striking range of mine costs. That is good news because it will strip the present volatility out of the price. I should also point out that recent prices has triggered a slew of new projects and mine discoveries that is quickly topping up uranium inventory from that source and also smoothing the market.
Anyway they have collected kilos of uranium from seawater confirming some form of technical feasibility.
It is worth recalling that uranium is a new metal whose abundance in nature has only been recently mapped. Much has yet to be found and each surge of exploration ended with a major discovery that satisfied all immediate demands.
I think this is a repeat, but we are also witnessing the reacceptance of uranium used in the form of small reactors. It may find its market because of low cost.


September 07, 2009
Uranium from Seawater on a large Scale Update
http://nextbigfuture.com/2009/09/uranium-from-seawater-on-large-scale.html


Dr Masao Tamada, of the Japan Atomic Energy Agency, has developed a fabric made primarily of irradiated polyethylene that is able to soak up the minute amounts of uranium – around 3.3 parts per billion – in the seawater.
Dr Tamada hopes to secure funding to construct an underwater uranium farm covering nearly 400 square miles that would meet one-sixth of Japan's annual uranium requirements."Other countries are conducting similar research but none are as advanced as we are," he said. "We need to conduct more development research and be able to produce the adsorbent material on a large scale, but we could achieve this within five years."
JAEA and CRIEPI Report on Technology for Collecting Uranium fromSeawater
At a regular meeting of the Atomic Energy Commission (AEC) on June 2, the Japan Atomic Energy Agency (JAEA) and the Central Research Institute of the Electric Power Industry (CRIEPI) reported on technology for collecting uranium from seawater. According to the two organizations, the total amount of uranium contained in seawater – as one of the 77 elements dissolved therein – measures some 4.5 billion tons, about one thousand times more than is known to exist in uranium mines. Even if Japan could collect just 0.2% of the 520,000 tons of uranium transported every year by the Japan (Kuroshio) Current that flows in the Pacific Ocean, it could easily meet its annual need of 8,000 tons.
Tamada, Masao Genshiryoku eye 54(11), p.13-16(2008) ; (JAEA-J 04907)

Uranium recovery from seawater has been emerging issue since in June, 2007, uranium cost rose suddenly to $136 which was ten times as much as past cost. Though the uranium concentration in seawater is 3.3 ppb, total amount of uranium in seawater is 4.5 billion tons. This amount is 1000 times of mine uranium. An adsorbent which has high affinity to uranium is inevitable to collect the uranium in seawater. Radiation-induced graft polymerization can synthesize such adsorbent having enough strength in seawater, also. Up to now, it was proven that 1kg uranium was collected from seawater by the adsorbent synthesized by grating. Moreover, a braid type adsorbent has been developed for a practicable recovery system. The possibility of 25,000 yen/kg-U in uranium cost is shown in the annual collection scale of 1200 tons uranium by using this adsorbent. Further R&D is expected for the improvement of adsorbent durability and the simultaneous collection of vanadium with uranium.
Posted by arclein at 12:16 AM