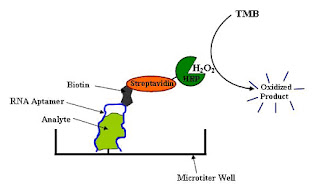 This is a pleasant surprise that leaps us forward to the day when cancer is cured. It is well known that early detection allows us to aggressively eliminate the disease while it is still easy to treat.

I recall that in the first applications of the AIDS cocktail that the dosages were aggressive and caused severe side effects. Today the process is almost gentle and victims are living out their lives in very good order.

We have the ability to do this with the early onset stages of almost all cancers, yet the care is dominated by late cancers and desperate interventions. So a device able to screen immediately for the presence of offending cell forms will swiftly change all that.

And intervention is likely to be a cocktail of specific drugs able to suppress the problem, or location and removal if warranted.

It also sounds like it will be available rather quickly and can become as ubiquous as a stethoscope.

This also technology that will see steady upgrading similar to what we have experienced with cell phones.

University of Toronto researchers, Shana Kelley and Ted Sargent, have made a cancer diagnostic breakthrough. Kelley said a five-year time frame would be a "conservative estimate" to get the device on the market.

U of T researchers have used nanomaterials to develop an inexpensive microchip sensitive enough to quickly determine the type and severity of a patient's cancer so that the disease can be detected earlier for more effective treatment.

The researchers' new device can easily sense the signature biomarkers that indicate the presence of cancer at the cellular level, even though these biomolecules - genes that indicate aggressive or benign forms of the disease and differentiate subtypes of the cancer - are generally present only at low levels in biological samples. Analysis can be completed in 30 minutes, a vast improvement over the existing diagnostic procedures that generally take days.

"Today, it takes a room filled with computers to evaluate a clinically relevant sample of cancer biomarkers and the results aren't quickly available," said Shana Kelley, a professor in the Leslie Dan Faculty of Pharmacy and the Faculty of Medicine, who was a lead investigator on the project and a co-author on the publication.

"Our team was able to measure biomolecules on an electronic chip the size of your fingertip and analyse the sample within half an hour. The instrumentation required for this analysis can be contained within a unit the size of a BlackBerry."

Kelley, along with engineering professor Ted Sargent - a fellow lead investigator and U of T's Canada Research Chair in Nanotechnology - and an interdisciplinary team from and Queen's University, found that conventional, flat metal electrical sensors were inadequate to sense cancer’s particular biomarkers. Instead, they designed and fabricated a chip and decorated it with nanometre-sized wires and molecular "bait."

Advances in materials chemistry offer a range of nanostructured shapes and textures for building new biosensors. Previous reports have implied that controlling the properties of sensor substrates can improve detection sensitivities, but the evidence remains indirect. Here we show that by nanostructuring the sensing electrodes, it is possible to create nucleic acid sensors that have a broad range of sensitivities and that are capable of rapid analysis. Only highly branched electrodes with fine structuring attained attomolar sensitivity. Nucleic acid probes immobilized on finely nanostructured electrodes appear more accessible and therefore complex more rapidly with target molecules in solution. By forming arrays of microelectrodes with different degrees of nanostructuring, we expanded the dynamic range of a sensor system from two to six orders of magnitude. The demonstration of an intimate link between nanoscale sensor structure and biodetection sensitivity will aid the development of high performance diagnostic tools for biology and medicine.

Shana Kelly Lab webpage at the University of Toronto

"Uniting DNA - the molecule of life - with speedy, miniaturized electronic chips is an example of cross-disciplinary convergence," said Sargent. "By working with outstanding researchers in nanomaterials, pharmaceutical sciences, and electrical engineering, we were able to demonstrate that controlled integration of nanomaterials provides a major advantage in disease detection and analysis."

The speed and accuracy provided by their device is welcome news to cancer researchers.

The team's microchip platform has been tested on prostate cancer, as described in a paper published in ACS Nano, and head and neck cancer models. It could potentially be used to diagnose and assess other cancers, as well as infectious diseases such as HIV, MRSA and H1N1 flu.

"The system developed by the Kelley/Sargent team is a revolutionary technology that could allow us to track biomarkers that might have significant relevance to cancer, with a combination of speed, sensitivity, and accuracy not available with any current technology," said Dr. Fei-Fei Liu, a radiation oncologist at Princess Margaret Hospital and Head of Applied Molecular Oncology Division, Ontario Cancer Institute. "This type of approach could have a profound impact on the future management for our cancer patients."

The plague of Cancer can be erased from the face of the Earth... Very easy... The same goes for infectious diseases...

The greatest discovery in human history has been made!

In more than 200,000 years of humankind on the planet all forms of cancer and any and all infectious diseases on Earth can be wiped out, eradicated once and for all... The discovery guarantees everybody the God's powers of health - never to get sick of cancers, or infectious diseases... Never!

West Nile virus infection is not only curable, but 100% avoidable. Everybody can avoid it, even if bitten many times by WNV infected mosquitoes. No antiviral vaccines or therapies are needed any more. Kids and adults can rest assured. West Nile and any other killer viruses on Earth (Colds, Flus, AIDS, Dengue, Yosemite, etc.) can be destroyed very easy and people can live their lives as if no viruses of any kind even exist...

I got the power to save the world from the West Nile and any other killer viruses spread (Causing Epidemics and Pandemics worldwide). The discovery guarantees what has been dreamed of for more than 200,000 years of humankind on the planet - to possess the Iron Constitution...

I call it Immunizer - just a simple exercise, but The Complete Colds/Flus/AIDS/West Nile/Yosemite/Cancers Prevention - normally done for a minute a day for kids and adults as the full prevention of the major plagues of civilization. If done for 3 - 4 minutes a day, the immunizer will guarantee a very fast recovery for those infected by Colds, Flus, AIDS, West Nile, Yosemite, Any other killer viruses and from any forms of Cancer...

Doing it, I stay healthy all the time. For me Cold and Flu Season does not exist. I cannot catch Cold, or the Flu. No way... I wear my summer tees and shorts all the time, even at air temperature of -15C (5F). I guess nobody else on Earth can walk at this winter air temperature clad in summer clothes... (Having ditched the scarves and parkas forever)...

Guaranteeing the Iron Constitution, the immunizer guarantees a considerable Life Extension... Once your body does not have to fight viruses and cancers...

I will disclose my Dream Immunizer (The Deadliest on Earth, The T-Rex Virus Killer and Cancers Preventer and Healer) to everybody in the world, if I am paid 200 Billion US Dollars (or BP) and all of us - kids and adults - will stay absolutely healthy all the time, all our lives, even if we are directly exposed to any possibly existing viruses and cancers on Earth - mutant, deadly and all the like. No killer cancers and viruses on Earth got any chance against the tremendous power of the immunizer - they just die the moment they touch you...