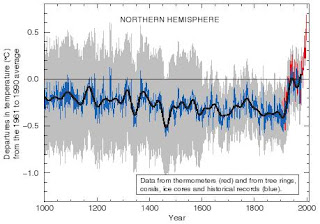 There is no way to be generous or to dodge this bullet. We now have outright confirmation that the data was deliberately selected to provide the dramatic eye catching result that was made it so famous. This is not science so much as a publicist’s dodgy manipulation of data to support a doubtful scheme.

I am certain every scientist has faced the frustration of months of hard work merely showing no evidence for the proposed theory. Once again our scientists had no evidence. So they merely selected the best data points in a statistical distribution and discarded the rest. I can prove anything if I am allowed to do that. Hell, I know of this great gold mine in which the grades exceed five ounces to the ton. – see this assay sheet?

When these guys floated their paper, they had no expectation anyone else would care and result were important in order to push their spurious claims. Then the world paid attention and they hid the data for ten years so no one could discover what they had done.

That is now over and we now left with a paper that manipulated the data in several places and actually fabricated the hockey stick upswing. It does not get any worse than this and on top of that it has been poisoning the debate for a decade instead of been called to account immediately.

In fact, why did the referees not ask for the raw data they relied on? That chart was simply too good to be true and everyone was lazy. I know that I thought it suspect the first time I laid eyes on it. But then after years of reviewing assay results, I am a little more demanding perhaps and appreciative how difficult it is to get good data at all.

It turns out that trees can scream.

A colleague in the climate-realist blogosphere sends along the following narrative which all Planet Gore readers, even the muttering monitors over at Team Soros, should find very interesting. The inescapable and powerful conclusion is that Mann-made warming is real, while man-made warming remains at best a theory, more likely a hypothesis. Really.

This story deserves to be told.

1: In 1998, a paper is published by Dr. Michael Mann, then at the University of Virginia, now a Penn State climatologist, and co-authors Bradley and Hughes. The paper is named: Northern Hemisphere Temperatures During the Past Millennium: Inferences, Uncertainties, and Limitations. The paper becomes known as MBH98.

The conclusion of tree ring reconstruction of climate for the past 1,000 years is that we are now in the hottest period in modern history, ever.

Steve McIntyre, a Canadian mathematician in Toronto, suspects tree rings aren't telling a valid story with that giant uptick at the right side of the graph, implicating the 20th century as the "hottest period in 1000 years," which alarmists latch onto as proof of AGW. The graph is dubbed the "Hockey Stick" and becomes famous worldwide. Al Gore uses it in his movie An Inconvenient Truth in the famous "elevator scene."

2: Steve attempts to replicate Michael Mann's tree ring work in the paper MBH98, but is stymied by lack of data archiving. He sends dozens of letters over the years trying to get access to data but access is denied. McIntyre and Ross McKitrick, of the University of Guelph publish a paper in 2004 criticizing the work. A new website is formed in 2004 called Real Climate, by the people who put together the tree ring data and they denounce the scientific criticism:

3: Years go by.McIntyre is still stymied trying to get access to the original source data so that he can replicate the Mann 1998 conclusion. In 2008 Mann publishes another paper in bolstering his tree ring claim due to all of the controversy surrounding it. A Mann co-author and source of tree ring data (Professor Keith Briffa of the Hadley UK Climate Research Unit) used one of the tree ring data series (Yamal in Russia) in a paper published in the Philosophical Transactions of the Royal Society in 2008, which has a strict data archiving policy. Thanks to that policy, Steve McIntyre fought and won access to that data just last week.

4: Having the Yamal data in complete form, McIntyre replicates it, and discovers that one of Mann's co-authors, Briffa, had cherry picked 10 tree data sets out of a much larger set of trees sampled in Yamal.

5: When all of the tree ring data from Yamal is plotted, the famous hockey stick disappears. Not only does it disappear, but goes negative. The conclusion is inescapable. The tree ring data was hand-picked to get the desired result.

These are the relevant graphs from McIntyre showing what the newly available data demonstrates.