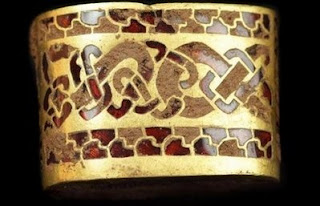 This is a reminder of the importance of hobbyists in the ongoing search for new archeological data. It is not possible even then to cover much prospective country and this discovery and the associated rewards will surely inspire many others to take up the search. I would like to see the same system applied everywhere and particularly where it is obviously prospective.
This discovery is major and reflects a local ruler’s hoard. They obviously did not survive to retrieve this throve and it was lost to contemporary knowledge. The size of the trove is impressive, yet reflects that of a small region and suggests just how much metal was available.
Almost all contemporary metal was recycled and made useful. In fact this process was remarkably efficient and left little record of its passage through time except through accident and the like. Thus a throve like this is a huge link to that past era and plausibly the only reliable one.
This will help fill in the blanks we have for that time in history. It speaks against a commonly held idea that this era was short of material wealth. I do not think that any era is ever short of some form of exchangeable wealth even if unrecognized.
Largest hoard of Anglo-Saxon treasure found in UK
http://news.yahoo.com/nphotos/Largest-hoard-Anglo-Saxon-treasure-found/ss/events/wl/092409anglosaxon#photoViewer=/090924/photos_wl_afp/386686c14b2e185777226f5637216433

LONDON – An amateur treasure hunter prowling English farmland with a metal detector stumbled upon the largest Anglo-Saxon treasure ever found, a massive seventh-century hoard of gold and silver sword decorations, crosses and other items, British archaeologists said Thursday.
One expert said the treasure found by 55-year-old Terry Herbert would revolutionize understanding of the Anglo-Saxons, a Germanic people who ruled England from the fifth century until the Norman conquest in 1066. Another said the find would rank among Britain's best-known historic treasures.
"This is just a fantastic find completely out of the blue," Roger Bland, who managed the cache's excavation, told The Associated Press. "It will make us rethink the Dark Ages."
The Anglo-Saxons, a group of Germanic tribes, gradually invaded England by sea starting in the fifth century in the wake of the collapse of the Roman Empire. Originally, they came from what is now the coastal region of northwest Germany.
Their artisans made striking objects out of gold and enamel and created poetry including "Beowulf," an anonymous epic poem about a warrior who does battle with monsters and a dragon.
Archaeologist Kevin Leahy, who catalogued the find, said the stash appeared to be war loot and included dozens of pommel caps — decorative elements attached to the knobs of sword handles. He noted that "Beowulf" contains a reference to warriors stripping the pommels of their enemies' weapons as mementoes.
But much other Anglo-Saxon literature and artwork has been lost through warfare, looting, upheavals and the passage of time, leaving scanty evidence for scholars of the period.
Bland said the hoard was unearthed in what was once Mercia, one of five main Anglo-Saxon kingdoms, and is thought to date to 675-725 AD.
The hoard consists of at least 650 items of gold and 530 silver objects weighing more than 2.2 pounds (1 kilo), along with some copper alloy, garnets and glass.
A total of 1,345 items have been examined by experts and 56 lumps of earth were found to contain metal artifacts detected by an X-ray machine, meaning the total will likely rise to about 1,500.
Most of the objects are ornaments for weapons and other military artifacts, some inlaid with precious stones.
"I think wealth of this kind must have belonged to a king but we cannot say that for absolute certain," Bland said.
Leslie Webster, the former curator of Anglo-Saxon archaeology at the British Museum, said the amount of gold uncovered — about 11 pounds (5 kilograms) — suggested that early medieval England was a far wealthier place than previously believed.
She also said the crosses and other religious artifacts mixed in with the mainly military items, might shed new light on the relationship between Christianity and warfare among the Anglo-Saxons.
Herbert, from the western English town of Burntwood, found the gold on a friend's farm on July 5 and spent the next five days scouring the field for the rest of the hoard, recovering the first items before professional archaeologists took over the excavation.
"Imagine you're at home and somebody keeps putting money through your letterbox, that was what it was like," Herbert said. "I was going to bed and in my sleep I was seeing gold items."
The hoard was officially declared treasure by a coroner, which means it will now be valued by a committee of experts and offered up for sale to a museum. Proceeds would be split 50-50 between Herbert and his farmer friend, who has not been identified. The find's exact location is being kept secret to deter looters.
Bland said he could not give a precise figure for the worth of the hoard, but he said the treasure hunter could be in line for a "seven-figure sum."
Herbert said the experience had been "more fun than winning the lottery," adding that one expert likened his discovery to finding Tutankhamen's tomb.
"I just flushed all over when he said that. The hairs on the back of my neck stood up," Herbert said.
The treasure is in storage at the Birmingham Museum and Art Gallery. Some of the items are due to go on display starting Friday.
One of the most intriguing objects in hoard is a small strip of gold inscribed with a warlike Latin quotation from the Old Testament, which translates as: "Rise up, O Lord, and may thy enemies be dispersed and those who hate thee be driven from thy face."
The strip may have been fastened to a shield or a sword belt.
Bland said archaeologists were still baffled by the function of many of the pieces.
"There's lots of mystery in it," he said.
Posted by arclein at 12:13 AM